After Delhi, Kanwariyas resort to violence in UP, attack cops, vandalise vehicles

The Kanwariyas had attacked policemen and vandalised their official vehicle in UP's Bulandshahr. 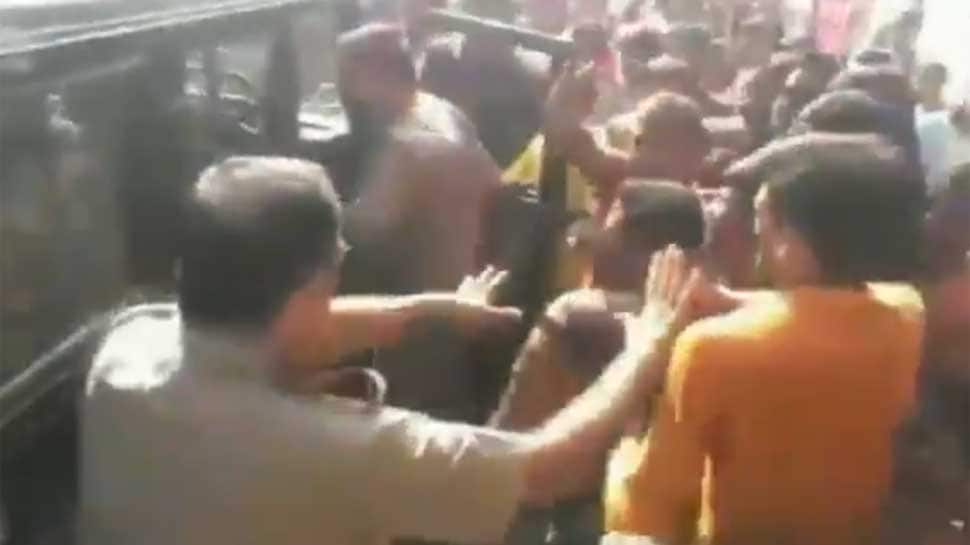 NEW DELHI: After Delhi, the Kanwariyas have now resorted to violence in Uttar Pradesh, this time targeting the cops deployed on duty.

According to reports, a group of Kanwariyas had attacked policemen and vandalised their official vehicle following an altercation in the Bulandshahr district of Uttar Pradesh.

The incident, which was caught on camera, reportedly took place on August 7.

#WATCH: Kanwariyas vandalize police vehicle after an altercation with locals in Bulandshahr on 7th August, police have registered a case. pic.twitter.com/UaIcNU55RV

The Kanwariyas, backed by some locals, targeted the police van and assaulted the cops present on the spot following an altercation.

The cops, who initially tried to pacify the agitated Kanwariyas, had to run for their lives.

The Bulandshahr Police have registered a case against unidentified persons in connection with the attack.

The fresh incident of hooliganism by Kanwariyas was reported two days after a separate group of 'Kanwariyas' resorted to violence and vandalised a car after one of them was hit by the vehicle in West Delhi's Moti Nagar area.

Interestingly, a video of a top ranking Uttar Pradesh Police official showering rose petals on the Kanwariyas has now come to fore.

According to reports, Additional Director General of Uttar Pradesh Police (Meerut Zone) Prashant Kumar was caught on camera showering rose petals on the Kanwariyas from a helicopter on Wednesday.

The video of the UP top cop showering rose petals on the Kanwariyas is being widely shared on the social media.

Along with Prashant Kumar, Meerut Commissioner Anita Meshram and other senior officials too showered rose petals on Kanwariyas from the helicopter.

#WATCH: Kanwariyas vandalize police vehicle after an altercation with locals in Bulandshahr on 7th August, police have registered a case. pic.twitter.com/UaIcNU55RV

Interestingly, UP Chief Minister Yogi Adityanath had earlier conducted an aerial survey of the Kanwar Yatra route during the first half of the Shrawan month that began on July 28.

The saint-politician also reportedly showered flower petals from his chopper on the Kanwarias, who responded by prostrating on the highway as the chopper passed through them.

ADG Kumar later issued a clarification saying, ''no religious angle should be given to this. Flowers are used to welcome people. Administration respects all religions and actively takes part, even in Gurupurab, Eid, Bakrid or Jain festivals.''