Did not protest against him, says BJP MLA Rakesh Singh Baghel who was thrashed by party MP Sharad Tripathi in UP

Both Tripathi and party Baghel had come to blows during a meeting to discuss developmental projects. 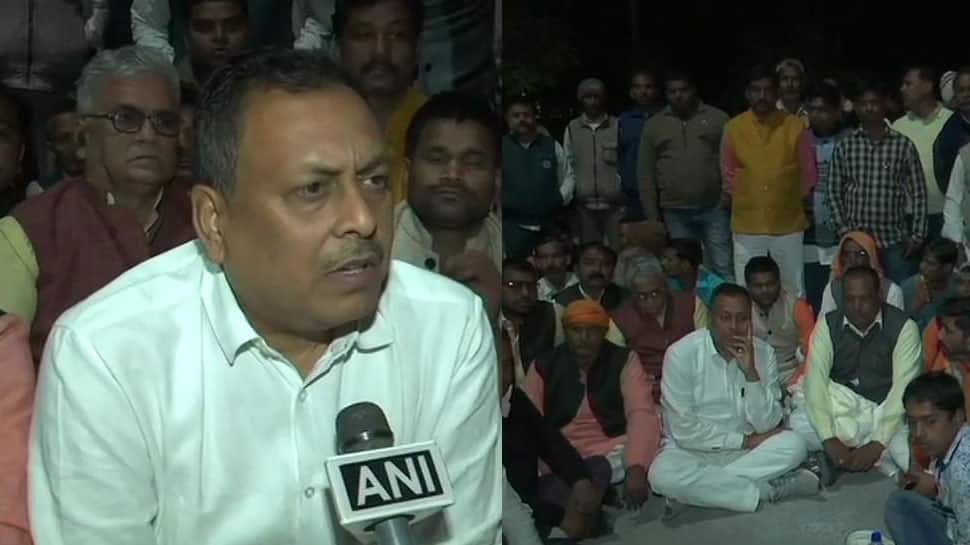 Sant Kabir Nagar: Ruling BJP MLA Rakesh Singh Baghel, who was hit with a shoe by party MP Sharad Tripathi following an altercation, on Thursday called off his protest and clarified that it was not against the former.

Soon after the incident, Baghel has his supporters had sit on a protest outside the District Magistrate office demanding the arrest of Tripathi.

The incident was caught on camera and shared widely on the social media platforms, causing a big embarrassment to the BJP.

Speaking to ANI, Baghel said, ''We had an altercation over the placement of names on a foundation stone of a road project. We've no demands, but administration baton-charged the BJP workers with lights switched off. I'm sitting in protest against that. We're not protesting against Sharad Tripathi.''

BJP MLA Rakesh Singh Baghel:We had an altercation over placement of names on foundation stone of a road project. We've no demands,but administration baton-charged BJP workers with lights switched off,I'm sitting in protest against that.We're not protesting against Sharad Tripathi pic.twitter.com/QGWdPJ3B3v

While Baghel is an MLA from the Mendhawal constituency, Tripathi is a BJP MP from Sant Kabir Nagar.

Both Tripathi and party Baghel had come to blows during a meeting to discuss developmental projects here.

Initially, both of them had a verbal argument over the placement of names on a foundation stone of some development project.

However, the argument soon turned ugly as the two leaders got into jostling, pushing each other and ultimately fisticuffs.

Tripathi then hit Baghel with his footwear to which Tripathi also retaliated by slapping the MP.

The incident took place during a meeting of the District Action Plan Committee at the Collectorate where various representatives and officials were present.

There have been reports that the two have not shared a very cordial relationship in the past as well.

An eyewitness said that the incident began with a heated argument between the MP and the MLA which snowballed into a physical fight.

The state party chief also warned that strict disciplinary action will be taken against them.

"We have taken cognizance of this condemnable incident and both have been summoned to Lucknow. Strict disciplinary action will be taken," Pandey said.