Issue of division of UP back in focus

The issue of division of Uttar Pradesh has once again bounced back to the centre stage of state politics with BSP supremo Mayawati raking up the issue that had been lying dormant in the polls till now. 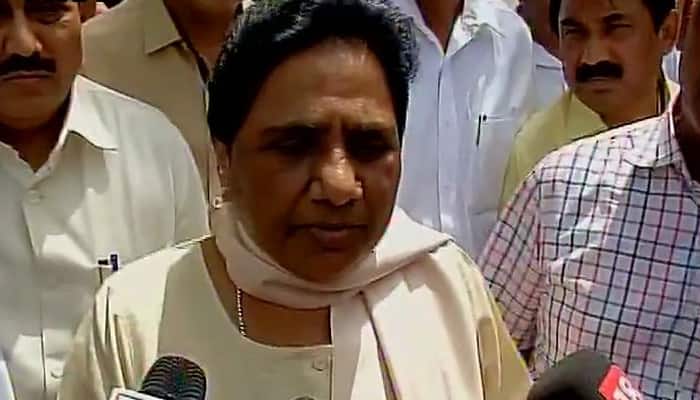 Lucknow: The issue of division of Uttar Pradesh has once again bounced back to the centre stage of state politics with BSP supremo Mayawati raking up the issue that had been lying dormant in the polls till now.

"If BSP forms government, it will not sit idle...It will divide UP into four smaller states, including Purvanchal, as proposed by the previous BSP government," Mayawati had said at an election meeting in Gorakhpur.

Gorakhpur is the hub of eastern UP or Purvanchal, the area which is considered to have lagged behind in development. Polling will take place in this area in the sixth and penultimate phase on March 4.

Mayawati had passed a resolution in the UP Assembly towards the fag end of her government in 2011 to carve out Harit Pradesh (western UP), Poorvanchal (eastern UP), Bundelkhand and Awadh.

"Your under-developed district can't be developed till the creation of a separate state. Efforts in this direction will be stepped up if the BSP comes to power. This election, you need to punish the Congress, BJP and SP, which have been opposing creation of Purvanchal," Mayawati had said on Sunday.

The issue of division of Uttar Pradesh had been lying dormant till now with major political parties including the BSP preferring silence so far.

Though there had been demands from different quarters, it was the BSP which had taken a concrete step in this direction by passing a resolution for division of UP.

Mayawati, who has been a strong supporter of the issue, had also used it to corner the Samajwadi Party on development and law and order issues, maintaining that smaller states could be governed better.

She had first raised the issue way back in 2007.

Dalit icon BR Ambedkar, the architect of the Constitution, by whose name Mayawati swears, had recommended division of Uttar Pradesh in his book "Bhashayi Rajya".

Both BJP and Congress had supported the resolution brought by Mayawati in the House. But, as Mayawati lost power in 2012 and ended up with just 80 seats against 206 seats in 2007, her demand lost steam and the issue surprisingly finds no mention in manifestos of other parties or in speeches made by their leaders this time.

As BJP-led NDA had carved out Uttarakhand, Jharkhand and Chhattisgarh from UP, Bihar and Madhya Pradesh respectively, it was believed that further division of UP might find favour with it but the party has been silent on the issue and understandably so as its stakes are high.

The saffron party has preferred skirting the issue in these election though it even recently used to emphasise on giving recognition to regional aspirations.

Samajwadi Party, which is opposed to the idea of any further division of the state, has ignored the issue in its campaign fearing that such a development might harm its electoral prospects while giving an edge to Rashtriya Lok Dal (RLD) headed by Ajit Singh, BJP and Congress.

The BJP manifesto is silent on the issue and speaks only about setting up Bundelkhand and Poorvanchal development boards if voted to power in UP.

All the more interesting is the fact that Ajit Singh's RLD, which used to sing the Harit Pradesh tune every election, is silent on the issue which even five years ago was central to campaigning by almost all political parties barring SP.

Besides RLD, Raja Bundela's Bundelkhand Congress, Kalyan Singh's erstwhile Jan Kranti Party, Amar Singh's now defunct Rashtriya Lok Manch and Ayub Khan's Peace Party -- all pitched for division of the state -- but most of them drew a blank in the Assembly elections in 2012.

While Mayawati's strength dropped to 80 seats from 206, RLD got nine - one less than the previous tally, and Peace Party could get only four. On the other hand, Samajwadi Party, the only party to oppose the demand, stormed to power with a landslide victory, bagging 224 of the 403 Assembly seats.

Analysts said one reason could be the fact that people took pride in being residents of one of the country's largest state and did not wish to give up that identity.