The Suez Canal Authority, which operates the waterway, has deployed several tugboats in efforts to refloat the massive vessel, including a specialised suction dredger that is able to shift 2,000 cubic metres of material every hour. 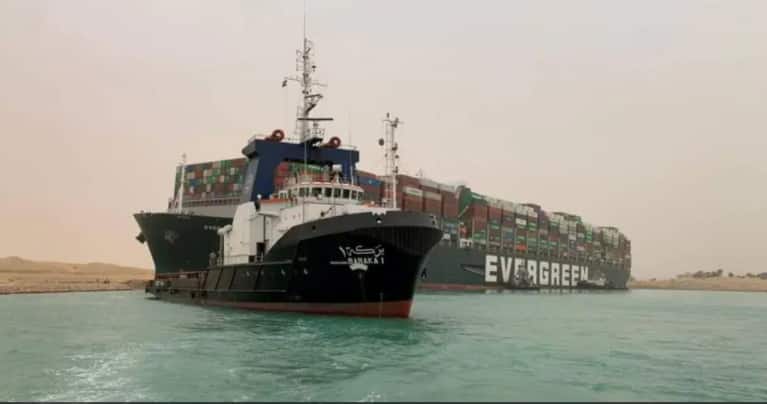 Ismailia: Egyptian authorities are striving hard to reopen traffic in a crucial East-West waterway for global shipping as a giant container ship remained stuck sideways Suez Canal. The Ever Given, a Panama-flagged ship that carries cargo between Asia and Europe, ran aground on Tuesday in the narrow, man-made canal dividing continental Africa from the Sinai Peninsula.

The Suez Canal Authority, which operates the waterway, has deployed several tugboats in efforts to refloat the massive vessel, including a specialised suction dredger that is able to shift 2,000 cubic metres of material every hour, said an AP report.

According to an AP report, the vessel's bow was touching the eastern wall, while its stern appeared lodged against the western wall 'an extraordinary event' that experts said they had never heard of happening before in the canal's 150-year history. It ran aground some 6 kilometres (3.7 miles) north of the southernly mouth of the canal, near the city of Suez, an area of the canal that's a single lane.

As of Friday morning, the vessel remained grounded in the same position, with tugboats and dredgers still working to free it, according to Canal service provider Leth Agencies. It reminded unclear when the route would reopen.

Notably, the ship, owned by Japanese firm Shoei Kisen KK, has blocked traffic in the canal, leaving dozens of smaller ships stranded in the Mediterranean and Red Seas.

An Egyptian canal authority official called the refloating a 'very sensitive and complicated' operation which needs to "be handled very carefully". They want to avoid "any complications" that could extend the canal closure. The official spoke on condition of anonymity as he wasn't authorized to talk to journalists.

A team from Boskalis, a Dutch firm specialised in salvaging, started working with the canal authority on Thursday. The rescue efforts have focused on dredging to remove sand and mud from around the port side of the vessel's bow.

It wasn't immediately clear what caused the Ever Given to become wedged on Tuesday. GAC, a global shipping and logistics company, said the ship had experienced a blackout without elaborating.

Evergreen Marine Corp, a major Taiwan-based shipping company that operates the ship, said in a statement that the Ever Given had been overcome by strong winds as it entered the canal from the Red Sea, but that none of its containers had sunk. The Suez Canal also blamed bad weather for the incident.

The blockage has caused headaches for global trade. Around 10% of world trade flows through the canal, which is particularly crucial for the transport of oil. The closure also could affect oil and gas shipments to Europe from the Mideast.

Some vessels could still change course, but the crush of ships listing the Suez Canal as their destination shows that an even-greater backlog looms for shippers already under pressure amid the coronavirus pandemic.

At least 150 ships were reportedly waiting for the Ever Given to be cleared, including vessels near Port Said on the Mediterranean Sea, Port Suez on the Red Sea and those already stuck in the canal system on Egypt's Great Bitter Lake.

Meanwhile, Japanese shipowner Shoei Kisen reportedly apologised for the incident and said work on freeing the ship, which was heading to Europe from China, "has been extremely difficult" and it was not clear when the vessel would float again.

Another official with knowledge of the operation said that was likely to take days. "If you end up in the scenario that you have to remove cargo then you are looking at a time consuming exercise," he said, declining to be named. A higher tide due on Sunday may help the rescue efforts.

The Egyptian meteorological authority is also warning of a "disruption of marine navigation" due to an expected sea storm on Saturday and Sunday, with winds forecast to reach up to 80 kph (50 mph) and waves up to 6 metres high along the Red Sea and the Gulf of Suez.