In China, cars can now run on biodiesel made from recycled gutter oil 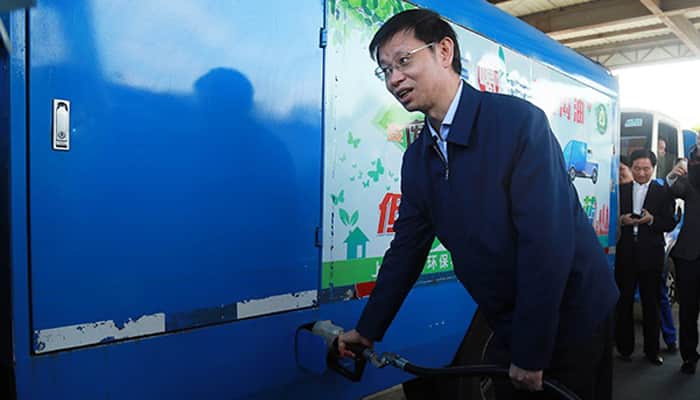 Recycled waste fuel is now up for sale in China at a Sinopec gas station in Shanghai. The gas station located in Fengxian district has two biodiesel oil tanks.

Twenty sanitary vehicles were brought in on Tuesday filled with biodiesel produced from recycled gutter oil. This fuel is being sold at 5.72 yuan (Rs 55.84) per liter compared with 6.02 yuan (Rs 58.76) for standard diesel.

Along with the Sinopec gas station, the oil company is also preparing another gas station in Pudong district to sell the recycled waste fuel.

Sinopec's biodiesel sales mark the debut of biofuel made from grease trap oil and used cooking oil on China's fuel market. Yang Jinsong, director of the Shanghai Food and Drug Administration said the Shanghai municipal government would continue to encourage the market-oriented operation of biodiesel production and sales.

Yang also said that these will be allowed to be used in the city's buses, sanitary vehicles, cargo trucks and cargo ships on Yangtze River.

The step is a milestone achievement for Shanghai which recovers 150 tonnes of gutter oil daily on average. Owing to this, there will now be incentives for waste oil recovery from restaurants. As opposed to the past where restaurants had to pay to get waste oil treated, they can now sell the oil to the city's recycling firm.

Shanghai Zhongqi Environment Technology Co. Ltd has been designated the task of disposing of the city's leftover cooking oil and turn it into biodiesel. Trucks with special license for carrying gutter oil are equipped with GPS devices.

A strong market supervision will be required on the recovering and treatment as well as biodiesel generation process to ensure the oil's quality.

While the government is promoting the use of biodiesel, individual users are likely to have doubts over the performance of the biodiesel in automobiles.

Woman who married herself 'cheats on herself'