Myanmar has been in turmoil since the military staged the coup against Aung San Suu Kyi's elected government on February 1 and detained her and other members of her party, drawing widespread international condemnation. 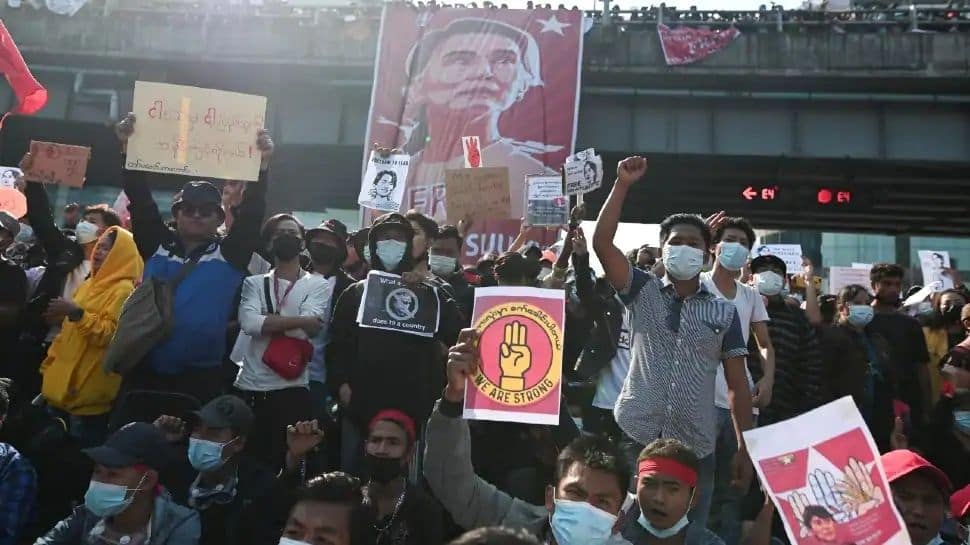 Myanmar: Thousands of residents fled an industrial suburb of Myanmar's commercial capital on Tuesday (March 16)  after it was placed under martial law by the ruling junta following bloody anti-coup protests over the weekend.

"Here is like a war zone, they are shooting everywhere," a labour organizer in the Hlaing Tharyar district told Reuters, saying that most residents were too frightened to go outside.

More than 40 people were killed by security forces in protests in Hlaing Tharyar on Sunday (March 14) and several factories were set ablaze. The families of many of the victims attended their funerals on Tuesday (March 16).

Myanmar has been in turmoil since the military staged the coup against Aung San Suu Kyi's elected government on February 1 and detained her and other members of her party, drawing widespread international condemnation.

France said the European Union would approve sanctions against those behind the coup next Monday.

The junta, meanwhile, charged the international envoy of the ousted government with treason for encouraging a civil disobedience campaign and calling for sanctions, army-run television said. The charges carry a possible death sentence.

Doctor Sasa -who is not in the country said he was proud to have been charged. "These generals have committed acts of treason every day. Taking what they want for themselves, denying the people their rights and oppressing those that stand in their way," he said in a statement.

More than 180 protesters have been killed as security forces try to crush a wave of demonstrations, according to the activist group the Assistance Association for Political Prisoners.

Many residents of Hlaing Tharyar, a poor suburb that is home to migrants and workers, fled on Tuesday (March 16) carrying their belongings on motorbikes and tuk-tuks after the army placed it and five other townships in Yangon under martial law, Frontier Myanmar reported.

Two doctors told Reuters there were still wounded people in need of medical attention in the area, but the army had sealed its entrances.

A total mobile internet shutdown made it difficult to verify the information and the vast majority of people in Myanmar have no access to WiFi. A junta spokesman did not answer telephone calls to seek comment.

Earlier, China Global Television Network, an English-language international Chinese channel, had warned against further attacks on Chinese-owned businesses after more than 30 factories in Hlaing Tharyaran were torched on Sunday (March 14).

"China won't allow its interests to be exposed to further aggression. If the authorities cannot deliver and the chaos continues to spread, China might be forced into taking more drastic action to protect its interests," said CGTN, which is linked to the Chinese Communist Party.

Beijing is viewed by the opposition movement as supportive of the military and, unlike Western powers, it has not condemned the coup. Along with Russia, it has prevented the UN Security Council from denouncing the military`s actions as a coup.

Dozens of funerals were held in Yangon on Tuesday (March 16, 2021). Hundreds of mourners spilt onto the street at the funeral of medical student Khant Nyar Hein, who was killed on Sunday (March 14, 2021), the bloodiest day so far in the weeks of protests.

"Let them kill me right now, let them kill me instead of my son because I can`t take it any more," the student`s mother was seen saying in a video clip posted on Facebook.

At least one more protester was shot dead on Tuesday in the central town of Kawlin, a resident there said.

People held up pictures of Suu Kyi - Myanmar's most prominent champion of democracy over three decades - and called for an end to the repression during a protest in the southern town of Dawei on Tuesday, the Dawei Watch media outlet reported.

The army said it took power after its accusations of fraud in a November 8 election won by Suu Kyi`s National League for Democracy (NLD) were rejected by the electoral commission. It has promised to hold a new election but has not set a date.

Suu Kyi, 75, has been detained since the coup and faces various charges including illegally importing walkie-talkie radios and infringing coronavirus protocols.

"The military is attempting to overturn the results of a democratic election and is brutally repressing peaceful protesters," US Secretary of State Antony Blinken told a news conference in Tokyo.

The UN human rights office said "deeply distressing" reports of torture in custody had emerged and five people were known to have died in detention.

French Foreign Minister Jean-Yves Le Drian said the European Union would approve sanctions on the generals at a foreign ministers` meeting next Monday. These will suspend all budgetary support and target the economic interests of individuals involved in the coup, he said.

Members of the ousted government, who have set up a parallel administration, called on Total and other oil firms operating in Myanmar to suspend payments to the military-controlled state.