After fire burns down cabin, man survives Alaska temperature for weeks before getting rescued: Watch

When the Alaska State Troopers’ Helo 3 circled in the area, their attention was grabbed by a huge “S.O.S.” sign on the snow and a man was waving his arms. 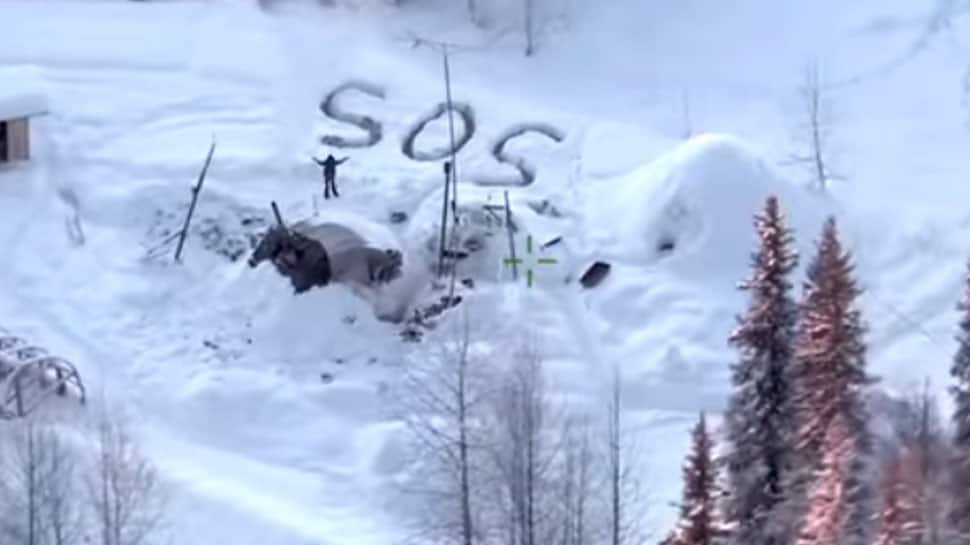 In a miraculous feat, a man survived the Alaska wilderness for nearly a month after his cabin was destroyed in an inferno. 30-year-old homesteader Tyson Steele was stuck in extreme subzero temperatures of Skwentna for more than 20 days before he was rescued by the Alaska State Troopers. When the Alaska State Troopers’ Helo 3 circled in the area, their attention was grabbed by a huge “S.O.S.” sign on the snow and a man was waving his arms.

The incident took place on a fateful night on  December 17-18, 2019, when the cabin roof caught fire around 1 or 2 am when the temperature was 15 degrees below zero. He had been living alone since September 2019 in that remote area of the Susitna Valley. As the fire lept out of control, he managed to grab a few essentials and rushed out. However, his dog couldn't fight the flames and succumbed.

Steele’s only way in or out of the wilderness was by air charter and his nearest neighbour was almost 8 km away. As his cabin was engulfed in the blaze, he carefully considered his life and death situation. He planned his inventory and decided that on two cans of food per day he had rations for 30 days. He also a jar of beans, mayonnaise and a couple of jars of peanut butter. "The thing was, maybe half of those cans, they’ve heated up and popped open and the smoke’s circulating inside the can –plastic, whatever, um, insulation. So, it tastes like my home, just burning."

With no shelter above his head, his next task was to build something that would be comfortable in the freezing temperature. "So, the first two nights I slept in a snow cave. It was just big enough for my sleeping bags and me and a couple of things of food. And that stayed, you know, snow caves are pretty nice for survival. There’s a lot of insulation. My next goal was to build a shelter that can be a little more comfortable," he said. Steele next scavenged tarps and scrap lumber to build a tent-like domed shelter around the woodstove that has once heated his Quonset hut.

On trying to take a route to find a path, he said, "I didn’t have a map and I knew I didn’t have enough knowledge of the whereabouts. I could have said oh, [let’s go] that direction. But I have no idea what waterways stay frozen enough for me to walk through – I could fall through the ice. They bend around so much I could lose my direction. I only have six hours of [daylight] travel. I had a headlamp for maybe 10 or 11 days, but I only had the batteries that were in there. So, I ran out of light.”

After his rescue, Steele now wants to regroup. “I’m probably going to go back home to Salt Lake City. Not ‘back’ home, because this is my home but to my family. They’ve got a dog and that would be some therapy."

Iran calls for unity to expel US troops from Middle East