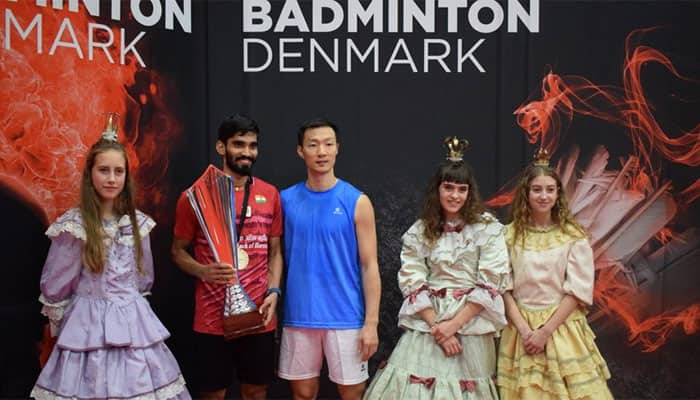 World No 8 Srikanth didn't give any chances to the more experienced Lee, who looked a pale shadow of the man, who had beaten World No. 2 Son Wan Ho in the semi-finals yesterday.

The duo were tied 4-4 before Srikanth changed gears and used his deception and powerful smashes to lead 9-5.

A return going to the net gave a point to Lee but Srikanth produced a brilliant cross court net dribble to bamboozle his opponent and moved into the break with a healthy 11-6 lead when the Korean went wide.

Lee had no answers to Srikanth's razor-sharp smashes and cross court returns as the Indian led 14-8. Lee also made judgement errors at the baseline and also miscued his strokes as Srikanth extended his advantage to 17-8 with another smash.

The Korean hit two long shots and then sent one at the net to hand over a 20-8 lead to Srikanth.

The Indian made two unforced errors to allow Lee get into doubles figures. But Lee again erred with the length of his return as Srikanth pocketed the first game.

In the second game, Srikanth stepped on the gas and zoomed to an 11-1 lead even as Lee struggled with his strokes, hitting wide and long and often finding the net.

Post mid-game break, Lee produced a steep crosscourt return, much to the cheer of the sizable crowd who had turned out to watch the finals. The Korean lacked anticipation as Srikanth smashed his way to the title.

Earlier, 2013 World Champion Ratchanok Inthanon produced another gritty display to stave off the challenge from World No. 5 and defending champion Akane Yamaguchi of Japan 14-21 21-15 21-19 to win her first title of the season.

"I didn't think about winning or losing. I just wanted to give my best for our beloved King, who passed away last year. It has been difficult for us and I am happy I could find the mental strength and power to win today," a teary-eyed Inthanon said.

Thailand's King Bhumibol Adulyadej, the world's longest- reigning monarch, had passed away last year after 70 years as head of state.

They defeated top-seeded Chinese combo of Zheng Siwei and Chen Qingchen 24-22 19-21 23-21 in a thrilling contest that lasted a little less than an hour.

Korea's women's doubles pair of Lee So Hee and Shin Seung Chan, who had won the 2014 World championship bronze medal at Denmark, dished out another sensational performance to outwit Japanese sixth seeds Shiho Tanaka and Koharu Yonemoto 21-13 21-16 to clinch the title.