The Men in Blue will be keen to clinch their 10th straight bilateral ODI series win against the side from the West Indies. 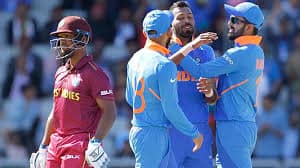 After sealing a 2-1 win over West Indies in the T20I series, Virat Kohli-led India will be boosted by confidence and look to continue their winning momentum when they take on the Caribbean side in the three-match ODI series, starting from Sunday at M.A Chidambaram Stadium in Chennai.

Heading into the series, the Men in Blue will be keen to clinch their 10th straight bilateral ODI series win against the side from the West Indies.

However, India will miss the services of their star opener Shikhar Dhawan and seamer Bhuvneshwar Kumar due to their respective injuries. Dhawan was ruled out of the T20I and ODI series against West Indies due to a knee injury which he sustained at the Syed Mushtaq Ali Trophy recently. Bhuvneshwar, on the other hand, will miss the West Indies ODIs due to a groin injury.

West Indies, on the other hand, came up with a decent performance in all three departments in the shortest format of the game against India. The Caribbean side, who won the second T20I by 8 wickets, will be keen to dominate India in the three-match ODI series and end their tour on high.

Let us take a look at a few statistics between India vs West Indies:

Indian skipper Virat Kohli leads the list of most runs scored by a cricketer in the series between India and West Indies. The 31-year-old has notched up a total of 2,146 runs in 35 innings he has played against the Caribbean side so far at an average of 76.64 and strike rate of 97.10.

Legendary cricketer Sachin Tendulkar has notched up 1,573 runs in 39 innings he played against the West Indies in his illustrious playing career.

Just like the run-scoring chart, Kohli also occupies the top spot in the list of players with most number of centuries to their name in the matches between India and West Indies. The swashbuckling batsman has so far scored nine centuries in 35 One-Day Internationals (ODIs) he played against the West Indies since playing his first match against the Caribbean side in 2009.

Given the number of runs Kohli has scored, it is understood that the most half-centuries between India and West Indies also belongs to him. The Indian skipper has a total of 19 fifties to his name against the Caribbean side.

He is followed by Tendulkar with 15 half-centuries from 39 innings while Rohit Sharma is standing at the third spot with 12 half-centuries to his name against West Indies.

Former West Indies cricketer Courtney Walsh continues to lead the list of most wickets by a player in the series between India and the Caribbean side. Walsh is standing at the top of the chart with 44 wickets from 38 innings he played against India.

Among the current players, Ravindra Jadeja is standing at the fourth position with 38 wickets in 26 ODIs he played for India against West Indies.

India's total of 418 for five against West Indies in Indore in December 2011 still remains the highest total ever between the two sides in the 50-over format.