RCB all-rounder Kyle Jamieson was seen padded up as he was slated to come in at No. 8 but when the camera was on him, the tall paceman was seen smiling looking at the team’s massage therapist Navnita Gautam. 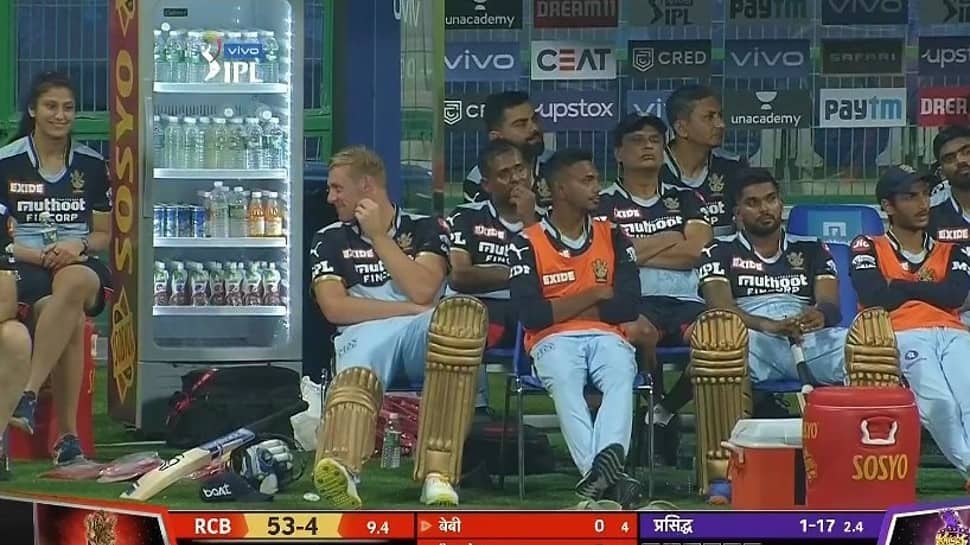 RCB's Kyle Jamieson seen in the team dug-out during their IPL 2021 match against KKR. (Source: Twitter)
Share:
Written By:

Virat Kohli’s Royal Challengers Bangalore (RCB) suffered a humiliating nine-wicket loss to Kolkata Knight Riders in their Indian Premier League (IPL) 2021 match in Abu Dhabi on Monday (September 20). Cricket fans on social media hunted for reasons of such a massive defeat and one of those culprits turned out to be New Zealand all-rounder Kyle Jamieson of RCB.

With the RCB score reading a dismal 53/4, the cameraman panned to the dugout during the 10th over of the innings. Jamieson was seen padded up as he was slated to come in at No. 8 but when the camera was on him, the tall paceman was seen smiling looking at the team’s massage therapist Navnita Gautam.

As soon as it appeared on the TV, the image of Jamieson smiling flirtatiously went viral. The picture inspired hilarious reactions varying from ‘men will be men’ to Jamieson ‘playing his own match’ to ‘team at 53/4, but Jamieson kept himself busy’.

She : Tell me those Three words

Jamieson : We are Chokers pic.twitter.com/az40jho2Rh

If this isn't the next best idea for Imperial Blue's 'men will be men' series then I don't know what is pic.twitter.com/L3IECeXH3R

Meanwhile, it turned out to be a poor outing for Virat Kohli’s side as apart from winning the toss, it was a forgettable game for the RCB skipper, who was playing his 200th match in the IPL. RCB lost wickets at regular intervals as none of the batsmen could offer much resistance and they eventually bundled out for 92 runs.

KKR openers came out all guns blazing as they shot out the target in just 10 overs owing to Shubman Gill’s 48-run knock and debutant Venkatesh Iyer’s unbeaten innings of 41 runs off just 27 balls and help their team leapfrog to fifth position in the points table, with three wins in eight games.