Dhoni has most unbeaten innings and highest average in successful ODI run-chases.​ 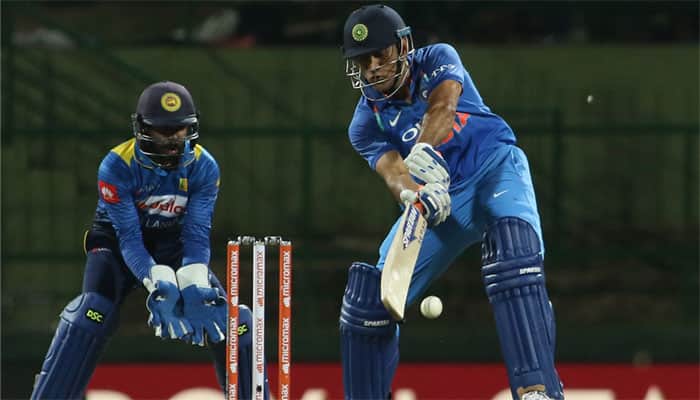 New Delhi: MS Dhoni, widely recognised as one of the best finishers the game has ever seen, produced yet another example of his calmness under pressure when he along with Bhuvneshwar Kumar registered a 100-run stand for 8th wicket en route to Team India's nervy win over Sri Lanka in the second ODI at the Pallekele stadium.

The nerve-wrecking match saw the former Indian captain register a few more records to his name:

1. Dhoni completed his 99th ODI stumping after affecting the dismissal of Sri Lankan opener Danushka Gunathilaka in the 14th over. His tally is the joint highest along with former Lankan wicketkeeper Kumar Sangakkara, though the Indian took quite a few matches less to reach the landmark.

2. After remaining not-out on 45 at the Pallekele stadium, Dhoni achieved the most number (120) of unbeaten knock in international cricket history. He surpassed Muttiah Muralitharan who had remained not-out on 119 occasions.

3. Dhoni and Bhuvneshwar were involved in a partnership of 100 not out which is India's highest eighth wicket partnership vs Sri Lanka in ODIs, obliterating the unbroken 57 between Virat Kohli and Axar Patel at Ranchi on November 16, 2014.

4. Dhoni also has most unbeaten innings and highest average in successful ODI run-chases.

Here are some other major stats encapsulating the Pallekele ODI:

India could make just 22 while losing six wickets -- from second to seventh. Against New Zealand at Dambulla on August 10, 2010, they had lost six wickets for 28 runs.

Mahendra Singh Dhoni enjoys splendid record in wins - his tally being 5682 at an average of 73.79, including seven hundreds and 38 fifties, in 166 matches.

Shikhar Dhawan and Rohit Sharma have shared 11 century stands -- the joint-third highest by an Indian pair -- the top two being 26 by Sourav Ganguly and Sachin Tendulkar and 13 by Virender Sehwag and Tendulkar.

Rohit is averaging 60-plus in ODIs this year -- his tally being 362 in seven innings, including a hundred and three fifties, in seven matches.

Bhuvneshwar Kumar (53 not out off 80 balls) has recorded a career-best score in ODIs, outstripping the 31 vs England at Dharamsala on January 27, 2013.

Kumar is the fourth India's No.9 batsman to register a fifty in ODIs, joining JP Yadav, Madan Lal and Praveen Kumar.

India's previous highest eighth-wicket stand in ODIs was 84 between Harbhajan Singh and Praveen Kumar vs Australia at Vadodara on 25-10-2009.

For the first time a hundred-run partnership has been recorded for the eighth wicket in successful chases in ODIs, bettering the 99 (unbroken) between Ravi Bopara and Stuart Broad for England vs India at Manchester on August 30, 2007.

MS Dhoni and Bhuvneshwar Kumar were superb, would have been happier if we had won: Akila Dananjaya