Meanwhile, the Bar Council of India called for a lawyers' strike across district courts in Delhi on November 4 in the wake of the incident. 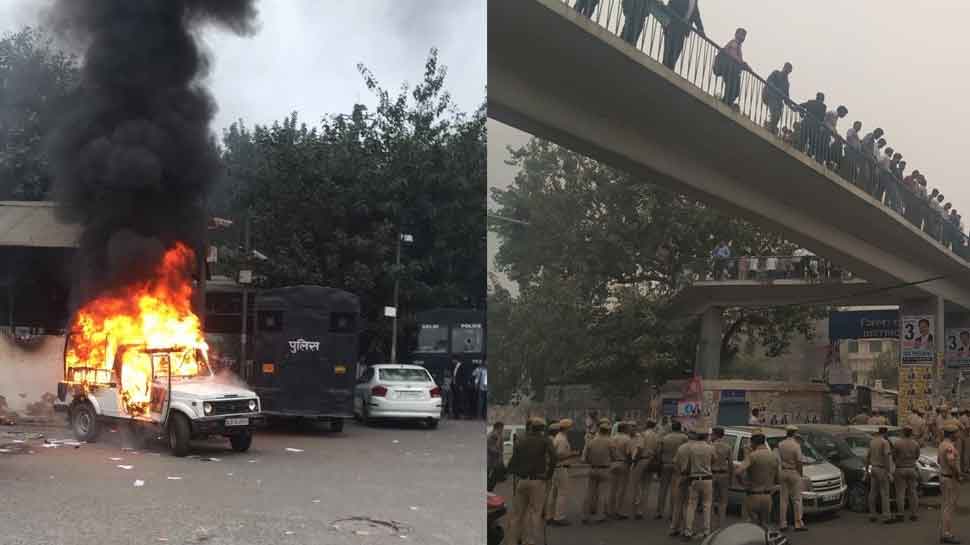 NEW DELHI: Delhi Police on Saturday constituted a team to probe into the clashes, which broke out between the policemen and lawyers at the Tis Hazari court complex in Old Delhi in which several vehicles were set ablaze and several persons were injured.

Delhi Police issued a statement over the incident in which it said that ''the CCTV footage is being examined. It has been decided that an SIT of the Crime Branch will investigate the cases registered.''

''It has also been decided that an enquiry team headed by a special CP will enquire into the entire sequence of event and, on its findings, further action will be taken,'' it said. The statement was released by Harendra Singh, Additional DCP, North District.

''Today at about 2 pm, an argument ensued between the advocates and Sentry of 3rd battalion, posted outside Lock up Tis Hazari Courts over the issue of parking of car by the advocate in front of lock-up of Tis Hazari Courts. The Sentry requested the advocate to park the vehicle in proper parking as the said parking would have hindered the movement of under trial prisoner vehicles. In protest, a large number of advocates of the Tis Hazari Court assembled near the lock-up. CCTV footage examined so far has shown that lawyers forcefully entered the lockup and started manhandling the police officials on duty. Immediately the senior officers of the district reached the spot and tried to counsel the advocates but they started assaulting the police personnel mercilessly,'' the statement said.

''Further, they also set on fire some police vehicles. When they stormed the police lockup, for the safety of under trial prisoners and in self-defence, police had to resort to firing aiming in the air. The circumstances of the gunshot injury to the lawyer are being further investigated with the help of the CFSL team. 20 police officials, including one Additional DCP and 2 SHOs, have sustained injuries in the incident. 8 advocates have also sustained injuries.''

''In the fire 12 private motorcycles, 1 QRT Gypsy of police and 8 jail vans outside the lock-up were damaged. Due to the burning of vehicles, the undertrial prisoners started feeling suffocated. A human chain was formed and all the under-trial prisoners were safely removed from the lock-up and safely shifted to Tihar Jail with proper escort and situation was brought under control after a lot of efforts.

Complaints have been received from both sides and cases are being registered.''

Meanwhile, the Bar Council of India called for a lawyers' strike across district courts in Delhi on November 4 in the wake of the incident.

Mahavir Sharma, Chairman and Dhir Singh Kasana, Coordination Committee Secretary-General, Bar Council of Delhi said that one lawyer was injured when police personnel opened fire at a group of advocates and several other advocates and a journalist was injured in the scuffle.

Sharma and Singh told the media that they will not let the Delhi Police, who fired at the lawyers, escape from the law.

"We strongly condemn brutal unprovoked attack on lawyers by police at Tis Hazari Court. One lawyer is critical. A young lawyer was beaten up in the lockup. This is high-handedness of police and they should be dismissed and prosecuted. We stand with Delhi lawyers," KC Mittal, Chairman, Bar Council of Delhi, said.

National Spokesperson of Congress Abhishek Manu Singhvi also reacted to the incident that happened at the Tis Hazari Court and said that legal recourse should be taken.

"Really disturbed by the instance of Tis Hazari Court in which a conflict between police and lawyers turned ugly. Since my sources tell me that a lawyer was shot, anger within legal fraternity is justified but not violence. Let`s hope the legal recourse is taken," he tweeted.

When the lawyer confronted them he was ridiculed and 6 police personnel carried him inside and thrashed him. People saw this and called the police," Jai Biswal, Tis Hazari Bar association`s office-bearer said.

Those who were injured in the scuffle with the police have been admitted to St Stephen`s Hospital.