Bounedjah, who missed a penalty in the quarter-final against Ivory Coast and spent the last few minutes of that game in tears after being substituted, stunned the Lions of Teranga with a shot which took a wicked deflection off Salif Sane and looped over the bewildered goalkeeper Alfred Gomis and into the net. 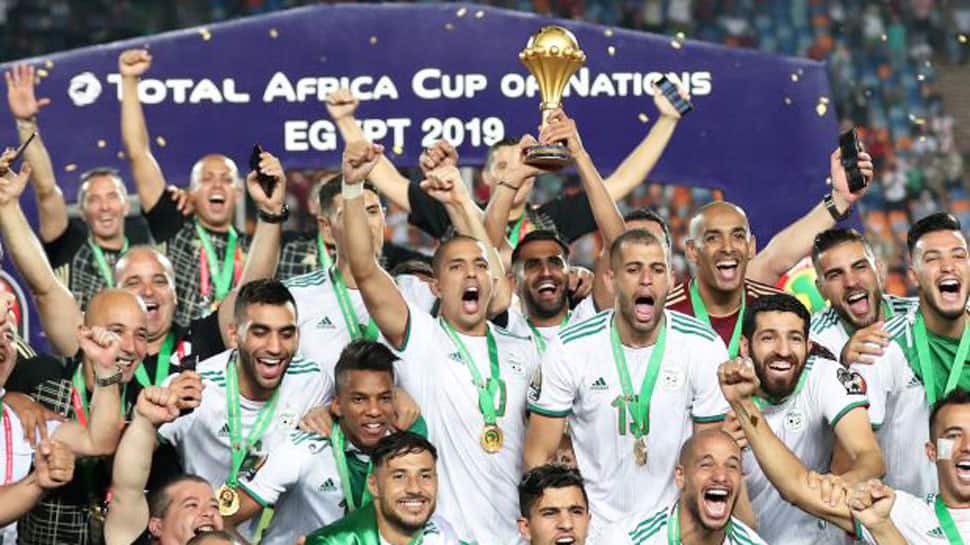 Algeria won the Africa Cup of Nations for the second time on Friday when a freak second-minute goal by Baghdad Bounedjah gave them a 1-0 win over gallant Senegal in the final.

Bounedjah, who missed a penalty in the quarter-final against Ivory Coast and spent the last few minutes of that game in tears after being substituted, stunned the Lions of Teranga with a shot which took a wicked deflection off Salif Sane and looped over the bewildered goalkeeper Alfred Gomis and into the net.

Algeria, who committed 32 fouls according to official match statistics, sat back after that and had to scrap for their win in a match that was certainly not a classic but was tense and gripping throughout.

Senegal, beaten by Cameroon on their only previous appearance in the final in 2002, were awarded a penalty for handball in the second half but the decision was revoked following a VAR review.

The final whistle provoked wild celebrations among the large contingent of travelling Algeria fans. It was a fitting end to a tournament that, with 24 teams for the first time, produced plentiful drama even if the quality was sometimes lacking.

"This has been tough," said Algeria coach Djamel Belmadi, who has restored order to the team after a turbulent period which saw them employ seven coaches in three years.

"I am very, very happy, for the country, for the people who have waited for this for a long time. It`s the first time we have won it outside our country, it`s simply extraordinary."

"They say you don`t play finals, you win them, I don`t really believe that," he added. "We prepared and wanted to play against this talented team, Senegal. It wasn`t our best match. We didn`t have ball possession nor impose our play."

The game got off to an extraordinary start when Bounedjah collected the ball, burst forward and unleashed a shot that took a deflection off Sane.

Gomis stayed rooted to the spot, seemingly thinking that the ball was going out, but it dipped under the bar.

But Algeria sat back and allowed Senegal to claw their way back into the game.

They had a major let off in the second half when Ismaila Sarr burst down the right and fired a low cross into the middle.

It struck Adlene Guedioura`s arm and, although it seemed impossible for the Algerian to get out of the way, the referee pointed to the spot but then changed his mind after a VAR review.
Algeria had another let-off shortly afterwards. Cheikhou Kouyate sent Mbaye Niang clear and he took the ball around Rais Mbolhi but shot into the side-netting.

Youssouf Sabaly then produced a vicious dipping shot which Mbolhi did well to tip over the bar before Sarr volleyed over with the goal at his mercy.

"We conceded way too early," said Senegal coach Aliou Cisse, who played in the side beaten on penalties in 2002 final and grew up in the same Parisian suburb as his opposite number."

"I think over the course of the match, we deserved to equalise. Tonight, I wanted to congratulate my players. We`ve been here for 46 days. We wanted it, but it wasn`t our night."

US fans at heart of growing Arsenal fan protests