Nigeria overcame a shock 2-0 defeat by Madagascar in the group stage to reach the quarter-finals with a dramatic 3-2 win over bitter rivals Cameroon and face South Africa in the last eight on Wednesday. 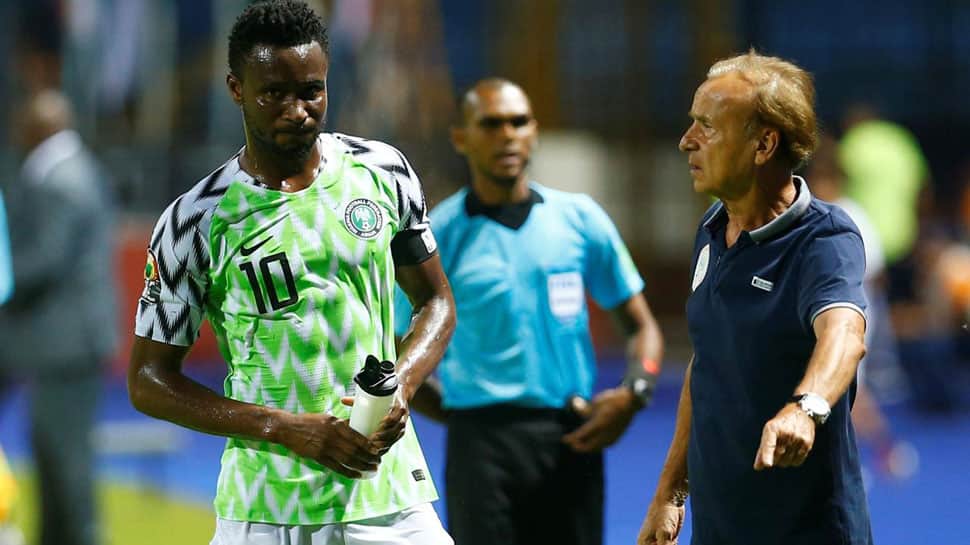 When Nigeria coach Gernot Rohr arrived late for a news conference on Tuesday because his driver went to the wrong entrance, it seemed to sum up his team`s efforts at the Africa Cup of Nations -- generally good but spoiled by basic mistakes.

Nigeria overcame a shock 2-0 defeat by Madagascar in the group stage to reach the quarter-finals with a dramatic 3-2 win over bitter rivals Cameroon and face South Africa in the last eight on Wednesday.

But there is a feeling that the Super Eagles, who won the 2013 tournament before incredibly failing to qualify in 2015 and 2017, could have made life easier for themselves.

"Our driver did not find gate number five -- normally we are on time but this time we could not be," the German told reporters to explain his late arrival.

Nigeria were also hit by a bout of sickness in the build-up but Rohr said that, for the first time since they arrived in Egypt, all 23 players were now fit.

"Anything is possible in this AFCON, you have so many surprises and so many mistakes, individual mistakes with all the pressure on the player," he said. "We have to avoid these mistakes, we try to not repeat some mistakes."

In two of the worst errors, Nigeria gifted Madagascar a goal when John Ogu`s back pass to Leon Balogun was intercepted and there was more poor defending in the 3-2 win over Cameroon when Ola Aina allowed Njie Clinton to steal in and score.

However, Rohr, who has brought stability to Nigeria`s often volatile national side in his two years in charge, said there was no blame culture in the team.

"The goal with Madagascar, and with Ola Aina against Cameroon, it`s part of the game," Rohr said. "In our team, we are able to say `sorry I make a mistake` but next time will be better."

"What is good is to see that goals we conceded are not coming from mistakes in our tactical organisation, or strategy but are individual mistakes, and we have to forgive."

Another source of concern has been the form of goalkeeper Daniel Akpeyi, based with South African club Kaizer Chiefs, who has looked unsteady in some games.

"I have confidence in him," said Rohr. "He is used to their football, he is capable and he is the right goalkeeper for this match."