After a goalless first half, FC Goa concede in the 52nd minute through defender Narayan Das, whose deflection cost his team an own goal. 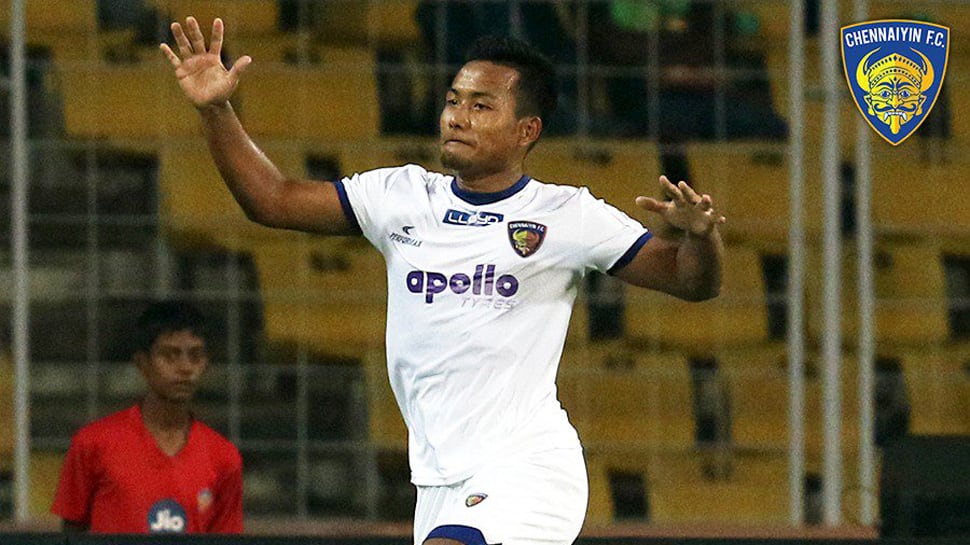 Chennaiyin striker Jeje Lalpekhlua created a lot of chances but unfortunately none of them landed behind the net. (Twitter)
Share:
Updated:
Feb 16, 2018, 10:57 AM IST
Source:
PTI

Margao: Chennaiyin FC managed a 1-0 win over FC Goa to move to the third place in the Hero Indian Super League, thanks to an own goal by defender Narayan Das. After a goalless first half, Chennainyin FC created more scoring chances in the second half and the all important goal came in the 52nd minute as the visitors gathered full points.

Chennainyin thus put themselves in a strong position for a place in the play-off after grabbing the third spot with 27 points from 15 games. FC Goa came back strongly after conceding the goal and had lot of scoring opportunities but failed to materialise. Luck too eluded them as the ball hit the woodwork twice and they remained on the sixth place with 20 points from 14 matches.

Chennainyin FC made two changes from their last drawn match against Delhi Dynamos, bringing in Bikramjot Singh and Sereno Henrique in place of Keenan and Gavilan. FC Goa, on the other hand, made one change bringing in Brandan Fernandes in place of Manvir Singh. Looking for a win to keep themselves in the race for the play-off, both the teams started on an attacking note with Chennainyin making early inroads but initially, Inigo Calderon failed to find his shot on target and later Raphael Augusto, who troubled the rival defence with speedy run, shot straight to keeper Naveen Kumar.

Goa, who had a shaky start, slowly settled down and took control over the midfield with Ahmed Jahouh and Eduardo Bedia dictating terms. They tried to make inroads but found stiff challenge from the rival defence who thwarted their attack.

The rival defence kept a close watch on the home team's striker Coro. It were the hosts that created dangerous moves and nearly found the net in the 37th minute but keeper twice came to the rescue, parring away Bikramjit Singh's cross from the right and off the rebound Jeje Lalpekhlua's powerful shot was blocked by Naveen as both the teams remained goalless at half-time.

Soon after the breather, Gregory Nelson's cross from the left was tapped in by Jeje but Narayan Das made a goalline save. Goa's citadel finally conceded in the 52nd minute when Ali failed to clear a simple loose ball inside the box and Francisco was allowed to pick out Nelson at the edge of the box, whose venomous strike was parried away by Naveen but only as far as Jeje.

The striker crossed across the face of the goal for Inigo Calderon but the ball hit Narayan Das on the goal line and went in. Down by a goal, FC Goa coach Sergio Lobera made double changes bringing in Hugo Adnan Boumous and Chinglensana Singh in place of Bruno Pinheiro and Narayan Das, and they opened up with a flurry of moves.

Chennainyin's goal lived dangerously as Eduardo Bedia's curling shot from top of the box hit the cross bar and went out in the 67th minute. Two minutes later keeper Karanjit Singh had to make a diving save to deny substitute Hugo Boumous from scoring.