The 18-year-old was left out of the squad when Real last visited the Nou Camp in October, deemed too young and too inexperienced to face a Barca side who went on to defeat Madrid 5-1. 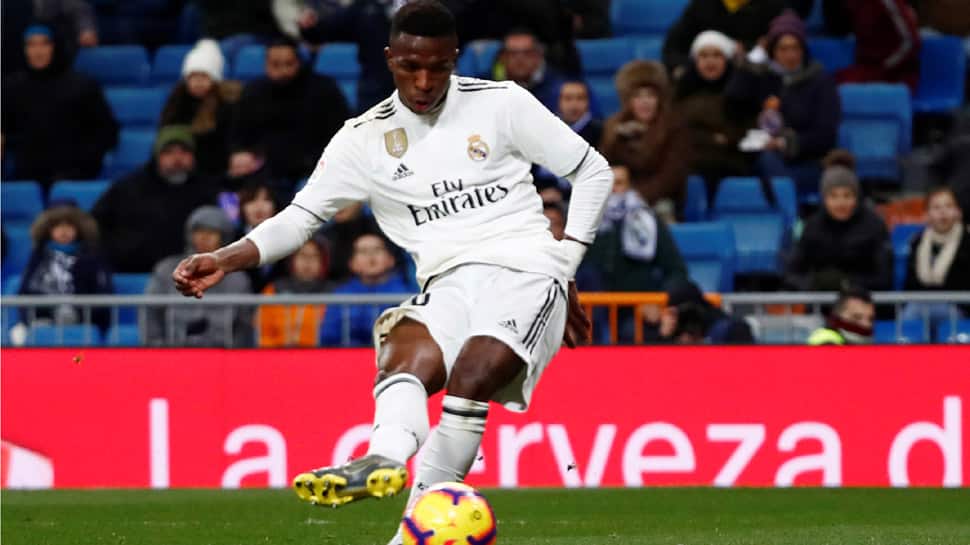 Brimming with confidence after scoring his first goal in La Liga in Monday's 3-0 win over Alaves, Real Madrid forward Vinicius Jr said he was raring to take on Barcelona in next week's Copa del Rey semi-final first leg.

The 18-year-old was left out of the squad by previous coach Julen Lopetegui when Real last visited the Nou Camp in October, deemed too young and too inexperienced to face a Barca side who went on to humiliate Madrid 5-1 and spell the end of Lopetegui's brief time in charge of the club.

The Brazilian has undergone a dramatic transformation since, spearheading Real's recent revival under Santiago Solari, which has seen them win their last four league games and reach the Copa del Rey semi-finals for the first time since 2014.

After receiving a standing ovation from the Santiago Bernabeu, faithful in his ninth consecutive start for the European champions, Vinicius said he has no fear about taking on Lionel Messi and go on Thursday in front of 90,000 baying Barca fans.

"I'm not fazed by anything, I play for Real Madrid, the best team in the world and I fear nothing," Vinicius told reporters.

He added, "The Nou Camp is a great stage, we have to rest a bit for now and then work hard to try and beat Barca. I don't know if I'll play, the coach will decide what's the best way for the team to win."

Real coach Solari kept his cards close to his chest when asked if he would field Vinicius against Barca.

"He had a magnificent game and left the pitch with the Bernabeu applauding him," he said.

He added, "We're delighted with his progress and excited about his future and the experienced players in the squad are looking after him, they are fond of him and they are giving him the right advice."

Real took advantage of Barca's 2-2 draw with Valencia to move within eight points of the La Liga leaders, although they are still third in the standings.

Despite the two rivals' contrasting seasons, Solari is backing his side to win at the Nou Camp.

He concluded, "Madrid are always the favourites in every game, we try to be humble, but we are always thinking about winning. We're not feeling euphoric at the moment, we're taking everything naturally and we'll try and put all our energy into the next game."