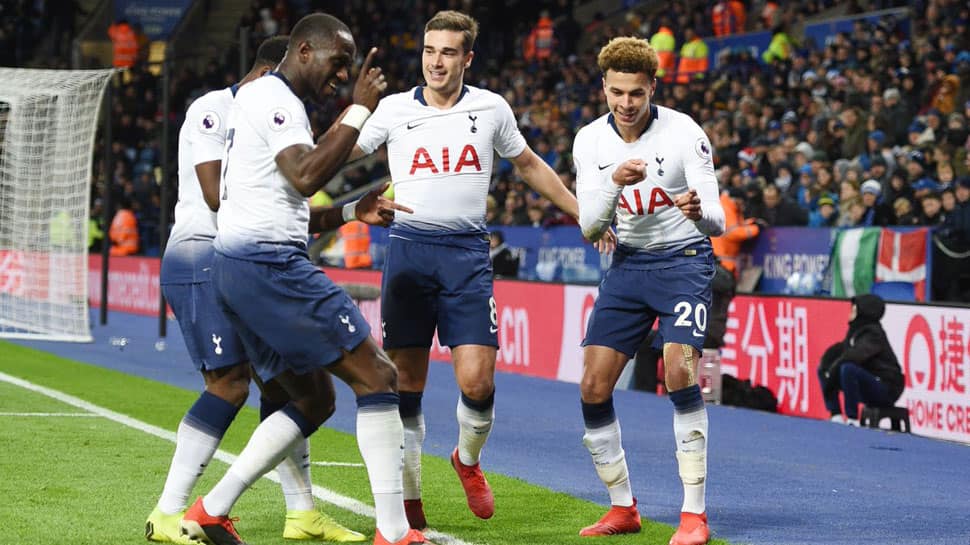 Tottenham went ahead through Sanchez who scored his first goal for the London club by meeting Eriksen`s whipped cross with a diving header in the 33rd minute, although Leicester`s players complained he was in an offside position.

Leicester missed the chance to equalise on the hour mark when substitute Jamie Vardy`s penalty -- his first touch after coming on -- was pushed away by Hugo Lloris after Jan Vertonghen was adjudged to have fouled James Maddison in the box.

"Lloris saved us a few times and we were lucky that he took out the penalty which gave us confidence. You felt that in the whole stadium, and we`re happy to have Hugo," Eriksen said.

Tottenham doubled their lead three minutes later as Eriksen collected the ball on the edge of the penalty area and unleashed a fierce shot past goalkeeper Kasper Schmeichel.

Vardy made up for his earlier miss by tapping in from close range 14 minutes from the final whistle after a well-worked move allowed Ricardo Pereira to drill in a cross from the right.

After a sustained period of Leicester pressure, Son settled nerves of the home supporters by slotting in Tottenham`s third with a solo run from the halfway line.

Eriksen said Tottenham had showed plenty of character to see off a determined Leicester, a quality that could help them in Wednesday`s Champions League last-16 first leg clash against Bundesliga leaders Borussia Dortmund.

"We didn`t make life easy for ourselves. The last three games we won in the last 10 minutes, which shows the character of the team and we did that again today. It`s going to be the same on Wednesday," the Dane said.

Tottenham had a first-half penalty claim denied after Harry Maguire appeared to bring down Son with the referee booking the South Korean for simulation, a decision manager Mauricio Pochettino described as "unbelievable".

"When you compare the situation with the penalty for Leicester, unbelievable... I`m more relaxed because we won.Do you think that we`re a team trying to cheat a referee? Come on, we`re one of the nicest teams on the pitch," Pochettino added.

"Throughout the game we had a feeling we can score... we had chances and half chances," the Frenchman said. "It`s difficult to accept with all the good intention to go without the reward. We need a little more conviction and a clinical edge," Puel said.