Dressing your salads, greens in oils and fats makes them more nutritious

According to recent research, a little dressing with your greens can help you absorb the important nutrients in the veggies. 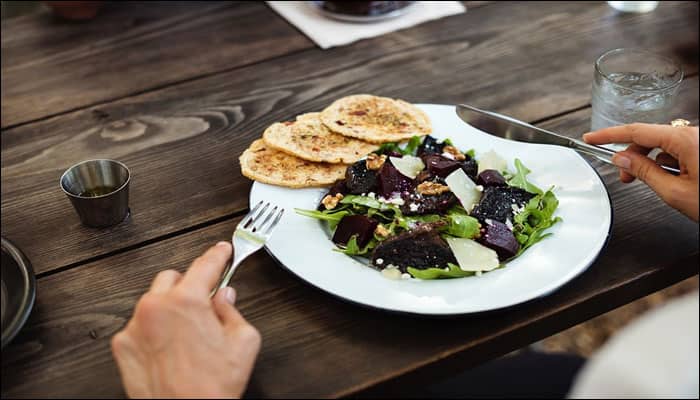 New Delhi: If you are one of those who believe in eating your salads plain and simple, we have some important news for you!

According to recent research, a little dressing with your greens can help you absorb the important nutrients in the veggies.

This study shows that if people eat their salads with added fat in the form of soybean oil, it promotes the absorption of eight different micronutrients that promote human health.

Conversely, eating the same salad without the added oil lessens the likelihood that the body will absorb the nutrients. The research also found that added oil aided in the absorption of seven different micronutrients in salad vegetables.

Those nutrients include four carotenoids -- alpha and beta carotene, lutein and lycopene -- two forms of vitamin E and vitamin K.

The oil also promoted the absorption of vitamin A, the eighth micronutrient tracked in the study, which formed in the intestine from the alpha and beta carotene.

Better absorption of the nutrients promotes a range of health benefits, including cancer prevention and eyesight preservation.The amount of oil added to the vegetables had a proportional relationship with the amount of nutrient absorption. That is, more oil means more absorption, according to the study.

White noted, "The best way to explain it would be to say that adding twice the amount of salad dressing leads to twice the nutrient absorption."

But that does not mean that people should drench their salads in dressing.

The study included 12 college-age women who consumed salads with various levels of soybean oil, a common ingredient in commercial salad dressings. The subjects then had their blood tested to measure the absorption of nutrients.

Women were chosen for the trial due to differences in the speed with which men and women metabolize the nutrients in question.

The results showed maximal nutrient absorption occurred at around 32 grams of oil, which was the highest amount studied, or a little more than two tablespoons. However, White said she found some variability among the subjects.

She concluded, "For most people, the oil is going to benefit nutrient absorption. The average trend, which was statistically significant, was for increased absorption."

The study was published in The American Journal of Clinical Nutrition.