During PM Modi's visit to Bhutan, nine MoUs and one power purchase agreement were exchanged between New Delhi and Thimpu. 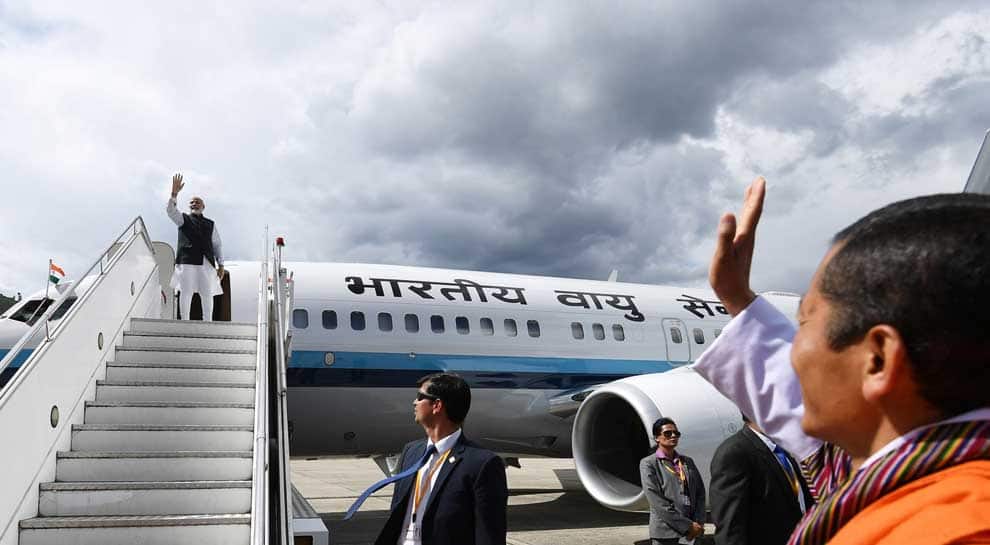 During his visit to the Himalayan nation, nine MoUs and one power purchase agreement were exchanged between New Delhi and Thimpu in the presence of PM Modi and his Bhutanese counterpart at the Semtokha Dzong at Semthoka on Saturday.

Before leaving for Delhi, the Prime Minister addressed students at the Royal University of Bhutan and paid his respects at the National Memorial Chorten, a revered monument honouring the late Third Druk Gyalpo.

The Prime Minister left for Delhi from Paro International Airport in a special aircraft.

"Thank you Bhutan for your love and affection. PM@narendramodi embarks for Delhi following a remarkable visit that heralded cooperation in new areas. As a special gesture, seen off by @PMBhutan at Paro airport," External Affairs Ministry spokesperson Raveesh Kumar tweeted.

Thank you Bhutan for your love and affection.

PM @narendramodi embarks for Delhi following a remarkable visit that heralded cooperation in new areas. As a special gesture, seen off by @PMBhutan at Paro airport. pic.twitter.com/3wzVfvYvd8

PM Modi was in Thimphu on his second visit to Bhutan as Prime Minister and the first since his re-election in May this year.

Meanwhile, Bhutan Prime Minister Lotay Tshering on Sunday said that the two-day visit of his Indian counterpart was a successful one in terms of strengthening "heart-to-heart" connection between the people of the two countries.

"We are very happy to report that Prime Minister Modi`s visit which was for only two days was a successful visit in terms of what we wanted to get and what we could give, mainly in terms of heart-to-heart connection," the Bhutanese leader said while addressing a press conference in Paro after PM Modi's departure.

People of Bhutan bid farewell to Prime Minister Narendra Modi as he made his way to Paro from Thimphu after attending the lunch hosted by the Bhutanese King, Jigme Khesar Namgyel Wangchuck, in his honour on Sunday.