The construction of Ram temple in Ayodhya is likely to begin in August, next month, as members of Shri Ramjanmbhoomi Teerth Kshetra Trust, mandated by the Supreme Court, met in Ayodhya on Saturday to finalise the date, which is also expected to get Prime Minister Narendra Modi's approval. 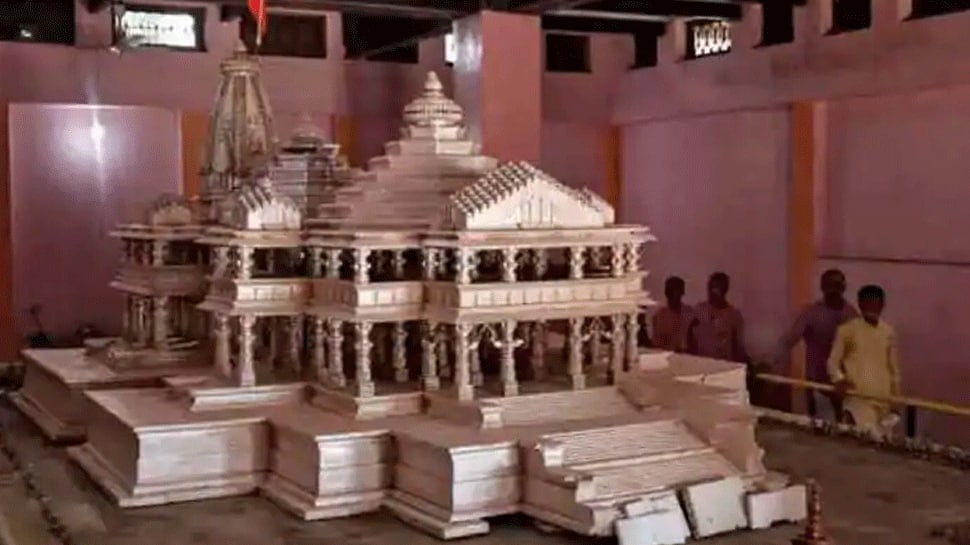 Proposed model of Ram temple in Ayodhya
Share:
Written By:

New Delhi: The construction of Ram temple in Ayodhya is likely to begin in August as members of Shri Ramjanmbhoomi Teerth Kshetra Trust, mandated by the Supreme Court, met in Ayodhya on Saturday and agreed on a tentative date for laying the foundation stone of the temple next month.

The trust members confirmed that an invitation has been sent to the Prime Minister and the final date for the beginning of temple construction will be finalised soon.

The trust has sent two likely dates - August 3 and 5 - to the PMO for PM Modi to lay the foundation stone of the Ram temple. Mahant Kamal Nayan Das, the spokesperson of Trust's president Nritya Gopal Das, said, "We have suggested two auspicious dates - August 3 and 5 - for the Prime Minister's visit based on calculations of movements of stars and planets."

General Secretary of the Trust Champat Rai said soon after the Monsoon, the Ram temple trust will contact 10 crore families across the country for financial help and it will take three to three-and-half years after the finalisation of the temple's design to complete its construction.

At the meeting, the issue of the height of the Ram Mandir was also discussed. The temple's height would be 161 feet and have five domes, said Kameshwar Chaupal, a member of the Shri Ram Janmabhoomi Teertha Kshetra Trust.

If things go as per plan, PM Modi is likely to visit Ayodhya on August 5, however, the PMO will put the final seal of approval on the date of his visit. As per the plan, the PM is expected to spend around 3-4 hours on that day in Ayodhya. He is also expected to attend Saryu Poojan and visit Hanumangarhi during his Ayodhya stay.

The PM is also expected to meet some of the prominent saints of Ayodhya and also the members of the Trust. Uttar Pradesh Chief Minister Yogi Adityanath will also be present on the occasion. Some influential Ministers from the Modi cabinet and UP government will also be present during PM's Ayodhya.

Besides the PM, Rashtriya Swayamsewak Sangh (RSS) chief Mohan Bhagwat will also be present on the occasion of the beginning of temple construction. According to sources, the construction at Ramjanmbhoomi is likely to begin in August.

While the temple construction ceremony was supposed to be celebrated with many Union Ministers, Chief Ministers and other important dignitaries in attendance, the list of attendees after COVID-19 spread is likely to have only Prime Minister Modi, Bhagwat, UP Chief Minister, few Ministers and MPs from the region, sources said.

The members of temple trust mandated by the Supreme Court stated that while the programme of ` Shilanyas’ has been done at `Singh Dwara`, it was not a proper ceremony.

The construction of a grand Ram temple at the Janmabhoomi of Lord Ram has been a defining issue for the Bharatiya Janata Party as it has been on the manifesto of the party for over two decades. The Ramjanmabhoomi Trust was formed by the Central Government after the Supreme Court's directive regarding it on November 9 last year.

In a bid to put an end to a century-old dispute, the Supreme Court in a unanimous 5-0 verdict ruled that the 2.77 acres of disputed land where the demolished Babri Masjid once stood will remain with a Central government receiver and be handed over to a Trust within three months for the construction of the temple.