The Yogi Adityanath government in Uttar Pradesh approved a draft ordinance to curb forcible religious conversions, including those for the sake of marriages between two communities, which could land violators in jail for up to 10 years. 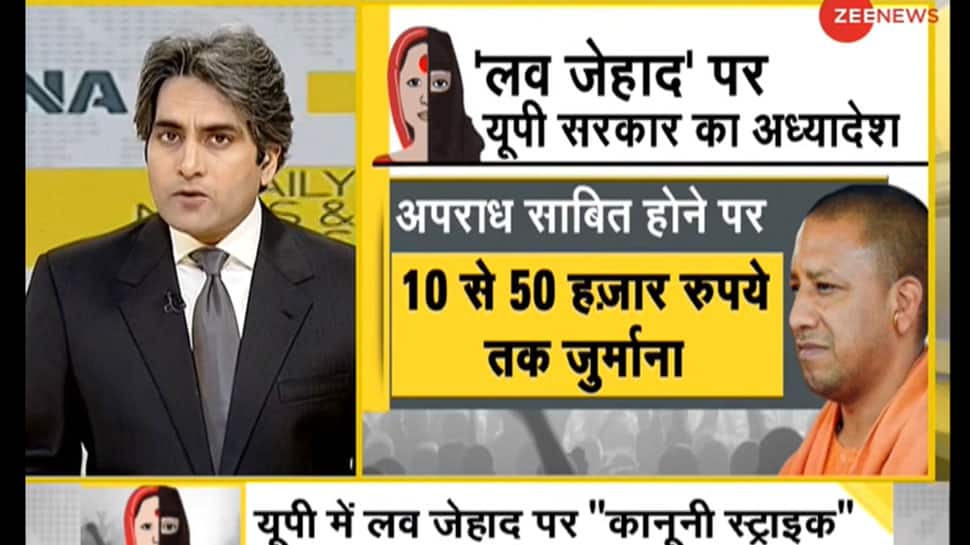 NEW DELHI: In what was possibly the biggest development on Tuesday (November 24, 2020), the Uttar Pradesh government approved a draft ordinance to curb forced religious conversions, including those for the sake of marriages between two communities.

The Yogi Adityanath government in Uttar Pradesh approved a draft ordinance to curb unlawful religious conversions for the sake of marriages between two communities, which could land violators in jail for up to 10 years.

Under the proposed law, a marriage will be declared 'null and void' if the conversion of a woman is solely for that purpose. According to UP government spokesperson Sidharth Nath Singh, it was necessary to have a law in this regard. Conversion for the alleged purpose of marriage is, however, just one aspect of the draft ordinance, he said.

The state government said the law aims to prohibit religious conversion done using dishonest means like false representation, through force, influence, torture, allurement or for the sake of marriage.

The onus to prove that conversion has not been done using such means will lie on the person carrying it out and the person who got converted. In cases of mass religious conversion, the registration of the social organisations will be cancelled and strong action will be initiated against them. Punishment under the new law is a jail term from one to five years and a fine of Rs 15,000. But if the woman involved is a minor or belongs to a Scheduled Caste or a Scheduled Tribe, the jail term would range from three to 10 years. The fine would increase to Rs 25,000.

In the case of mass conversions, the punishment is from three years to 10 years and a fine of Rs 50,000 on the organisations which indulge in it. If anyone wants to change their religion after marriage, they can do so. But the district magistrate has to be informed two months in advance on a prescribed form, and the person can convert once the permission is granted.

Converting without the District Magistrate’s approval can result in imprisonment from 6 months to 3 years. Those found guilty of unlawful religious conversions will be booked under non-bailable sections, according to the draft ordinance which would become law after its promulgation by the state's Governor.

By approving what is being roughly called the Uttar Pradesh Prohibition of Illegal Conversion Ordinance, 2020, Uttar Pradesh also became the first state to bring an ordinance to check unlawful religious conversions.

The new ordinance was cleared by Chief Minister Yogi Adityanath during the meeting of the state cabinet today. Addressing meetings for the by-polls in Jaunpur and Deoria last month, Chief Minister Adityanath had said that his government would come out with a law to tackle marriage-related conversions.

He had also referred to an Allahabad High Court ruling which had declared that conversion for the sole purpose of marriage is not valid. However, in a more recent ruling, the Allahabad High Court said that choosing a life partner irrespective of religion is a matter of personal liberty. The Uttar Pradesh State Law Commission had also submitted a report last year suggesting a new law to check forcible conversions.

In recent weeks, several BJP-run states like Uttar Pradesh, Haryana and Madhya Pradesh had announced plans to enact laws to counter alleged attempts to convert Hindu women to Islam in the guise of marriage, which is often referred to as 'love jihad'. However, Uttar Pradesh became the first state in the country to bring an ordinance in this regard and, the biggest reason behind this is the detection of several incidents of ‘love jihad’ across the state recently.

You would be shocked by the findings of the Zee News’ ground report on rising 'love jihad' cases in UP. These cases reflect the pain and sufferings of the daughters and their families in Kanpur, who have been cheated by the Muslim youths in the pretext of love. In several cases of 'love jihad', the Zee News team found that Muslim youths tried to lure Hindu girls by keeping a Hindu name, going to the temple, wearing a ‘kalava’ (sacred thread) and concealing their religious identity in the beginning.

In the first such case of 'love jihad', the Zee News team found how Fateh Khan, a Muslim youth, became Aryan Malhotra and befriended a minor girl and then raped her.

The Zee News team then went to Govindnagar in Kanpur where an accused Nafees Shah became ‘Babua’ to woo a Hindu girl and then he took her to his home and married her against her wishes. Nafees later forced the girl to convert to Islam. What is even more shocking was the fact Nafees Shah was already married twice before marrying the Hindu girl.

In another case of ‘love jihad’, Mukhtar Ahmed hid his identity and told the girl whom he married that his real name was Rahul Singh. Like Nafees Shah, Mukhtar Ahmed had also married a Hindu girl earlier.

While probing the ''love jihad'' cases reported in Kanpur, the Zee News team found a similar pattern - Muslim boys concealed their religious identity in the beginning, followed Hindu customs, and later forced their Hindu wives to convert to Islam. Interestingly, amid the ongoing row over 'love jihad', a lot of voices opposing the law against forced religious conversions have come to the fore. Most of them are those who consider themselves to be the torchbearers of Islam.

But today, not only the Muslims all over the country but also people of all religions need to know whether Islam permits religious conversion or not. The Quran is the most sacred book of Muslims which has several important references to religious conversion. One of the most important aspects of this is that the Holy Quran says that there is no scope for coercion in religion. The Quran states that coercion of any kind with anyone is completely prohibited in Islam whether it is done in the name of marriage or in the name of love.