Nadda enjoys good support of Rashtriya Swaymsevak Sangh (RSS) and he has risen in the party through his hard work and commitment towards BJP's ideology. He has long been a member of the BJP parliamentary board, the highest decision-making body of the BJP. 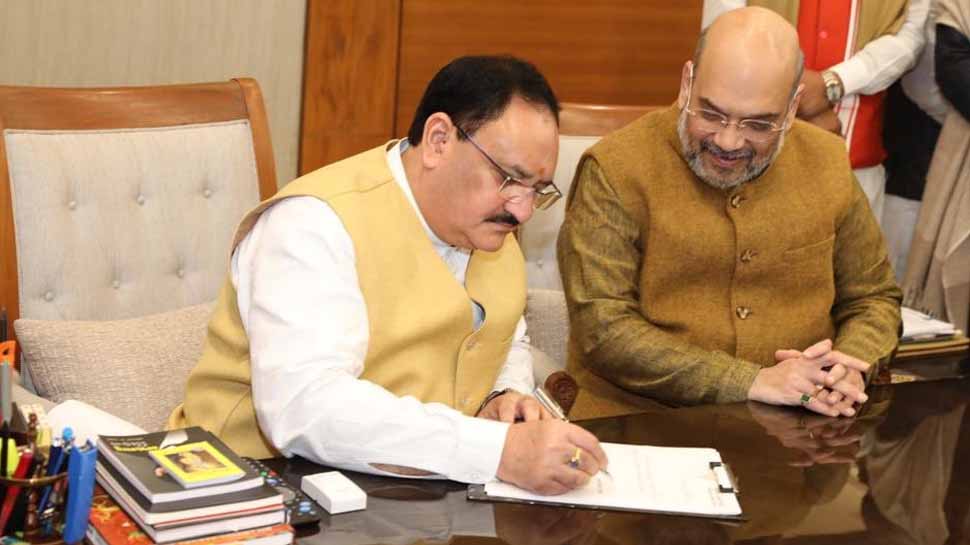 Senior BJP leader Jagat Prakash Nadda on Monday was elected the 11th national president of the Bharatiya Janata Party (BJP) unopposed. Nadda's election took place in the presence of Union Home Minister Amit Shah and several other senior BJP leaders. Many Union ministers and chief ministers of BJP-ruled states, had filed nominations in support of Nadda at the BJP headquarters in New Delhi.

Nadda enjoys good support of Rashtriya Swaymsevak Sangh (RSS) and he has risen in the party through his hard work and commitment towards BJP's ideology. He has long been a member of the BJP parliamentary board, the highest decision-making body of the BJP.

Nadda's elevation to the post of working president in 2019 had sent a clear message that the veteran leader from Himachal Pradesh was the top choice of Prime Minister Narendra Modi and Shah. BJP has always elected its president with consensus and without any contest and this is one of the prime reason why Nadda was elected unopposed to the coveted position. In July 2019, Nadda was appointed as BJP's working president after the inclusion of Shah in PM Narendra Modi's cabinet.

The immediate challenge that Nadda has to tackle is the Delhi Assembly election on February 8, where the BJP and Aam Aadmi Party (AAP) are engaged in a tough fight. This will be followed by the year-end Bihar election.

His biggest challenge will, however, be the West Bengal assembly election of 2021 where the BJP has never won. But the party emerged a strong contender to the Mamata Banerjee-headed Trinamool Congress (TMC) following its good show in the 2019 Lok Sabha election.

Nadda's election will end Shah's tenure of over five-and-a-half years during which he helped the BJP become a force to reckon with. Shah played a major role in BJP's super show in the two consecutive Lok Sabha elections under the leadership of PM Modi.

It may be recalled that Nadda was in-charge of the BJP's election campaign in Uttar Pradesh before the 2019 Lok Sabha election. He played an important role in helping the BJP win 62 out of the 80 Lok Sabha seats in Uttar Pradesh despite a tough challenge from the alliance of the Samajwadi Party and Bahujan Samaj Party.

The 59-year-old BJP leader takes the esteemed position bringing with him an experience of several decades. Born and raised in Bihar, Nadda's roots lie in Himachal Pradesh.

The senior BJP leader has always been politically correct and his jibes on the opposition have never triggered any unseemly controversy.

He was first elected to the Himachal Pradesh Assembly in 1993 and re-elected in 1998. During his first term, he served as the leader of his party in the assembly from 1994-98. He was the Minister of Health and Family Welfare and Parliamentary Affairs during his second term, from 1998.

After a span of almost a decade, Nadda was again elected for another term in the 2007 election. After Prem Kumar Dhumal formed a government, he inducted Nadda as minister of Forest, Environment, Science and Technology, from 2008-10.

In 2012, he didn't seek re-election to the assembly but instead got elected to Rajya Sabha. In 2014, during a cabinet reshuffle, he was made health minister by Prime Minister Narendra Modi.

Nadda is the former Union Minister of Health and Family Welfare, a member of Rajya Sabha from Himachal Pradesh and Parliamentary Board Secretary of the BJP.