Jharkhand Mukti Morcha (JMM) chief Hemant Soren said the party's win in Jharkhand is the victory of grand alliance (Mahagathbandhan), and thanked the people of the state, while addressing a press conference here on Monday (December 23). 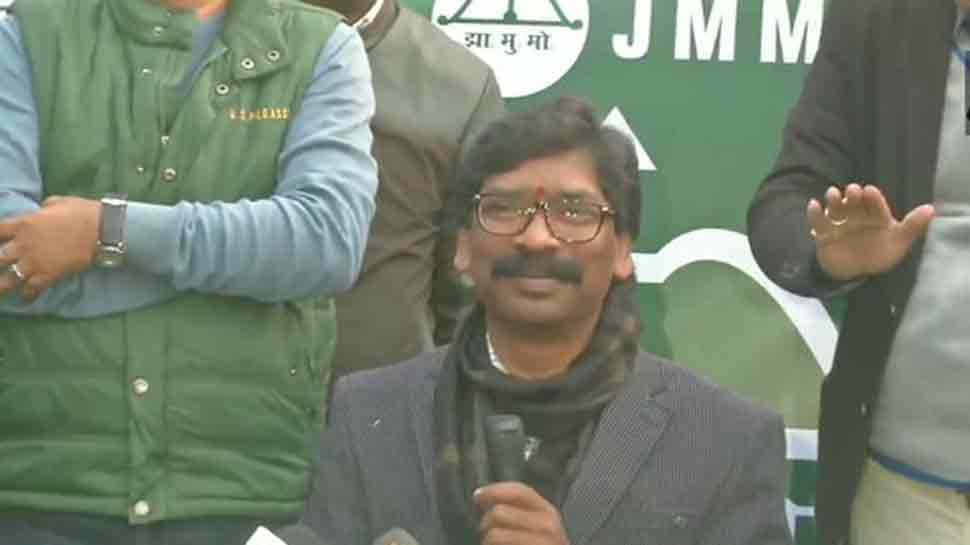 Ranchi: Jharkhand Mukti Morcha (JMM) chief Hemant Soren said the party's win in Jharkhand is the victory of grand alliance (Mahagathbandhan), and thanked the people of the state, while addressing a press conference here on Monday (December 23).

Hemant Soren said the leaders of the grand alliance will sit together once the final results are out, and decide the future course of action for the state. He also expressed gratitude to the party supremo Sibu Soren, popularly known as Dishom Guru, saying "his hard work has paid off and that led to our victory in Jharkhand election."

"I am thankful to people of Jharkhand for the mandate given in favour of the grand alliance," said Hemant Soren, who is ahead of his rivals in both Barhait and Dumka Assembly seats.

Leaving the BJP behind, the Jharkhand Mukti Morcha (JMM) has emerged as the single largest party in the assembly elections in the state, with 29 leads so far. JMM's nearest competitor, the BJP has got leads on 24 constituencies.

With Congress` 14 leads and Rashtriya Janata Dal`s 1, the JMM-Congress-RJD alliance is now leading in as many as 44 seats, which is past the majority mark of 42.

Notably, the JMM has managed to garner the vote share of about 19.2% of the total votes.

Earlier in the day, JMM Executive President Hemant Soren wearing jeans and a coat, took a cycle ride to reach his father`s residence and took their blessings.

Hemant`s father and JMM chief Shibu Soren`s residence is located at Morabadi ground in the city.

Hemant Soren, who is leading from Dumka and Barhait assembly seats, is likely to become Chief Minister for a second time.

Congress may name candidates for Maharashtra cabinet in evening