Dreaded Uttar Pradesh gangster Vikas Dubey was arrested in Madhya Pradesh's Ujjain on Thursday (July 9). Dubey, who was on the run for the last six days, had come to Ujjain to offer prayers at Mahakaal Temple. Dubey was identified by a security guard at the Mahakaal Temple. 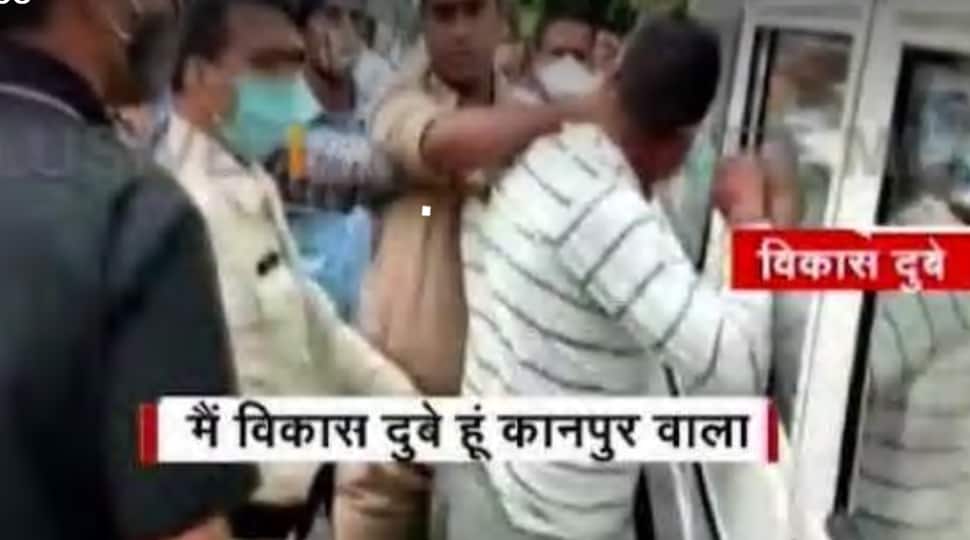 Dreaded Uttar Pradesh gangster Vikas Dubey was arrested in Madhya Pradesh's Ujjain on Thursday (July 9). Dubey, who was on the run for the last six days, had come to Ujjain to offer prayers at Mahakaal Temple. Dubey was identified by a security guard at the Mahakaal Temple.

The guard then called Ujjain police following which Superintendent of Police Manoj Singh arrived at the Mahakaal Temple to take Dubey in custody. The gangster was arrested almost 150 hours after he and his henchmen ambushed and killed eight Uttar Pradesh policemen on July 3 at his village in Kanpur.

Shortly after his arrest by Ujjain Police, Vikas Dubey said, "Main Vikas Dubey hoon Kanpur wala".  Then a police officer slapped on the back of Dubey's head asking him to keep quiet.

Former UP DGP Arvind Kumar Jain said that it seems that Vikas Dubey most probably planned his surrender at Ujjain's Mahakaal Temple and disclosed his identity to the guard who then called the police. Jain added that Dubey came to Ujjain with the plan to surrender before Madhya Pradesh Police as he feared that Uttar Pradesh Special Task Force was hot on his heels and some of his closest aides were killed in the last two days. He was always two steps ahead of the police as he had good contacts in the police department and was also close to some political leaders.

Madhya Pradesh CM Shivraj Singh Chouhan congratulated Ujjain Police and said that those who think that Mahakaal will wash off their sins do not know Mahakaal at all. He asserted that Madhya Pradesh government will not spare criminals at all.

MP Home Minister Narottam Mishra also confirmed Dubey's arrest and said that the state police was on high alert since Kanpur shootout and this helped in nabbing the dreaded gangster in Ujjain. Mishra added that two close aides of Vikas Dubey were also arrested with him

Earlier on Thursday morning, UP Police shot dead a close aide of Vikas identified as Praveen alias Bauva Dubey. Bauva carried a reward of Rs 50,000 on his head and was one of the accused in the ambush in Bikru village. Bauva was killed in an encounter in Etawah by a joint team of UP Police and Special Task Force.

In another encounter, one more close aide of Vikas Dubey identified as Prabhat Mishra was killed by Uttar Pradesh police in an encounter near Kanpur. Prabhat was arrested by Haryana Police on Wednesday (July 8) and was being brought to Uttar Pradesh on a transit remand for further interrogation when he tried to escape from police custody and was shot dead.