The PM, while outlining the steps taken by his government for improving the lives of millions of Indians, reiterated that the country has taken massive measure to free itself from separatism and terrorism. PM Modi also expressed hope that India will soon become a USD 5 trillion economy in the next five years. 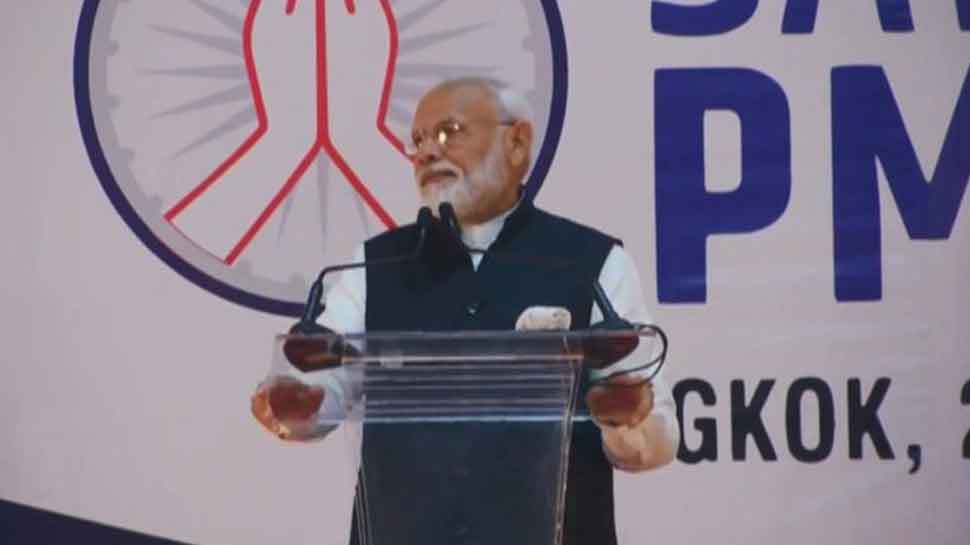 BANGKOK: Prime Minister Narendra Modi addressed the Indian diaspora in Thailand's capital Bangkok on Saturday. During his speech, the PM said that his government was bringing ''visible changes'' in India which is why people gave him a much bigger mandate this time. He said this while addressing ‘Sawasdee PM Modi’ community program in Bangkok. Prime Minister said that the Indians across the world keep in touch with their peers in India. “I’m happy about that. My countrymen feel a sense of pride when they get to know about the achievements of the country in the last five years,” he added.

The PM, while outlining the steps taken by his government for improving the lives of millions of Indians, reiterated that the country has taken massive measure to free itself from separatism and terrorism. PM Modi also expressed hope that India will soon become a USD 5 trillion economy in the next five years.

PM Modi is on an official trip to Thailand to attend the 16th ASEAN-India summit on Sunday. According to BJP in-charge of Foreign Affairs Dept Vijay Chauthaiwale, more than 5000 people are attending the event which is being addressed by Prime Minister Modi.

“Sawasdee PM Modi” is a reception organized by the Indian community in Thailand, in close coordination with Indian Embassy in Bangkok. In the Thai language, the word ‘Sawasdee’ is used for greetings and goodbye. ‘Sawasdee’ has its origination from Sanskrit word ‘Svasti’ which means welfare.

Ahead of his departure for Thailand, PM Modi in a statement said, “Connecting with the Indian diaspora is something I always look forward to. At 6 PM IST this evening in Bangkok, I would interact with the Indian community-based in Thailand. Their contributions to Thailand in various spheres are valuable.”

Here are the live updates of PM Modi's address to the Indian diaspora in Bangkok:-

-PM concludes his speech, thanks the Indian community and the Thai Govt for their hospitality and the grand welcome given to him.

-India is working to become a $5 trillion economy in the next five years: PM Modi

-We've recently allowed the OCI Card holders to be enrolled within the National Pension Scheme: PM

-I'm happy that you're playing a key role in empowering the economy of Thailand. India, today, is one of the world's fastest-growing economy.

-India and Thailand are progressing at a rapid pace, together. At least 300 flights fly between the two countries weekly: PM.

-At least 18 destinations in Thailand are connected to India, and the average flight time is between 2-4 hours: PM Modi

-A direct flight has been started from Varanasi, my constituency and the world's oldest cultural hub, to Thailand. It has also garnered a lot of fame: PM.

-We also want to connect NorthEast India to Thailand. We want to develop it as the gateway for SouthEast Asia: PM

-North East India is being developed as a gateway to South-East Asia, as part of India's Act East policy: PM

-Leaders from all 10 ASEAN countries graced the occasion of India's Republic Day: PM

-PM quotes from Thiruvalluvar in Tamil: 'A hard-working man invests in welfare of others'

-I invite all of you to visit India and the Kartarpur Sahib: PM

-The Kartarpur Corridor will open on Nov 9 and pilgrims with be able to visit the Kartarpur Sahib directly: PM

The Guru Nanak Garden made here is a commendable effort from the Sikh community here. Guru Nanak Ji's thoughts is a legacy for the entire humankind across the globe: PM

-It is a special responsibility on us Indians to share our heritage with the entire world: PM Modi

-By 2022, when India celebrates 75 years of independence, we are working to ensure a house for every poor in India: PM

-In the last 5 years, we've connected every Indian to a bank account and provided electricity. We're working to provide water to every family: PM.

-The Yojana recently completed 1 year, 60 lakh people have already availed to free medication through it: PM

-We're now working towards making the impossible come true. They were unimaginable. India has taken a massive decision to free itself from separatism and terrorism: PM Modi

-Those in Thailand know what steps India took to curb terrorism: PM Modi

-When a decision is right and is taken with the right mentality, it resonates with the entire world. Today, I can hear it in Thailand. This standing ovation from you is for the Parliament of India: PM

-We now take those challenges head-on that were once considered insurmountable: PM Modi

-Those who are visiting India after a gap of 6-7 years can see a visible improvement: PM Modi

-This is the first time in 60 years that a government in India has returned to power with a bigger mandate: PM Modi

-60 crore voters polled in this year's LS polls, the highest electoral event in the history of the world. Every Indian should be proud of it. For the first time in Indian elections' history, women have matched men in terms of number of voters: PM

-The transformation that India is undergoing at the moment is exactly why the people of the country chose me to become their prime servant for the second time in the LS polls earlier this year. They blessed me with more votes than they did last time: PM

-You can now tell your foreign friends that you hail from India and tell them to witness the speed at which India is progressing. You must have noticed even in Thailand that whenever India speaks, people listen with attention: PM

-Indians across the world keep in touch with their peers in India. I'm happy about that. My countrymen feel a sense of pride when they get to know about the achievements of the country in the last five years: PM

-Indians in every part of the world are aware of the developments taking place in India: PM

-There is a bit of 'India' within every Indian residing away from his country: PM

-We are fortunate that India has shown our gratitude to Princess Maha Chakri Sirindhorn through Padma Bhushan award and Sanskrit Samman: PM.

-The India-Thailand relationship is not just between governments. Every moment of history, every event of history has developed, broadened our relationship and reached new heights. These relationships are of heart, of soul, of faith, of spirituality: PM.

-Have you ever thought that our relations became so strong? What is the reason behind the strong bond that India and Thailand share? History has united us and has developed our relations: PM Modi.

-The affinity, the royal family of Thailand has for India, symbolizes our deep friendly & historical relations. Princess Maha Chakri Sirindhorn is an expert in Sanskrit language and has a deep interest in the culture: PM

-The entire world recently celebrated the festival of Diwali. A lot of people from Eastern India are here in Thailand. Today, Chhath Puja is being celebrated in India. I want to wish all Indians and Thais a very happy Chhath Puja: PM

-To address the Indian community at this event, I am in Thailand, among you all today. But I don't feel that I am in a foreign land. The ambience, the attire, everything here makes me feel at home: PM.

-Prime Minister Narendra Modi arrives in Bangkok. He will address the Indian community this evening.