Former Congress president Rahul Gandhi on Saturday left for a trip to Bangkok amid political turmoil his party is going through ahead of the Assembly election scheduled to take place in the states of Maharashtra and Haryana, according to Zee Media sources. 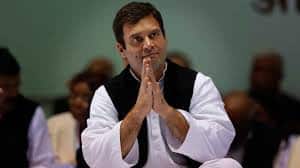 New Delhi: Former Congress president Rahul Gandhi on Saturday left for a trip to Bangkok amid political turmoil his party is going through ahead of the Assembly election scheduled to take place in the states of Maharashtra and Haryana, according to Zee Media sources.

According to Zee Media sources, the Gandhi scion is likely to return from his trip to Bangkok on October 10. This comes even as the grand old party is struggling under a political upheavel as it saw a string of resignations from senior Congress leaders just two weeks before the state assembly elections.

The development came after Tanwar had on Thursday resigned from all election committees of the party but said he would continue to work as an ordinary party worker. He had alleged that Congress in Haryana had turned into Hooda Congress as those who worked against the party's interest in the last five years have been given prominence over those who slogged to strengthened the opposition party in the state.

Ashok Tanwar, known to be close to former Congress president Rahul Gandhi, said "There is a conspiracy going on to bring down leaders who were guided by Rahul Gandhi."

Congress' troubles do not end at Haryana as in a series of tweets on Thursday, senior Maharashtra leader Sanjay Nirupam announced that he would not be participating in the party’s election campaign for Maharashtra if his supporter does not get the ticket. He further attacked the central leaders of the party, saying that they are still unaware of the ground reality.

The leaders in Delhi are unaware of the ground reality. The top brass is totally disconnected as they stay away from campaigning. There is also no mechanism to take feedback from the party workers on the ground," Sanjay Nirupam said while addressing a press conference in Mumbai.

Nirupam also threatened to quit the party if things do not change for better soon. Making a scathing attack on the top brass, Nirupam also made similar allegations as Tanwar that those close to interim Congress chief Sinia Gandhi are manipulating things and conspiring against those who had remained loyal to Rahul Gandhi.

Nirupam's open revolt against the Congress top brass is likely to further boost the BJP-Shiv Sena alliance in Maharashtra, who looks confident of winning the assembly election with a thumping majority.

Amid the internal turmoil ensuing in Congress, Rahul Gandhi's decision to take a vacation in Bangkok at a crucial time has come as a surprise. The polling in the states of Maharashtra and Haryana is scheduled to take place on October 21 and the results will be declared on October 24.