Ready to resign only if people of Bengal ask me to: Amit Shah on Cooch Behar killing

In an earlier statement, the TMC chief had demanded Shah's resignation over the killing of four people in a firing by CISF personnel. 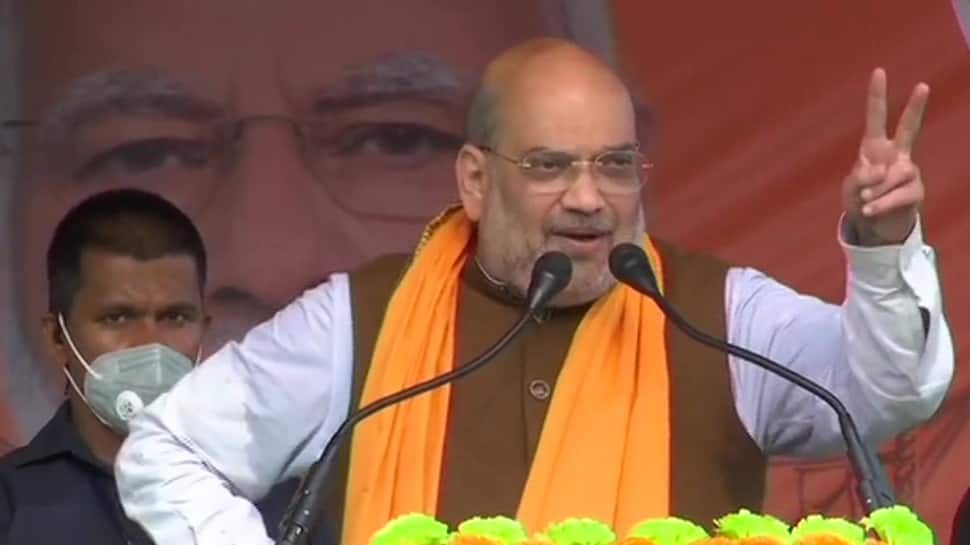 New Delhi: Union Home Minister Amit Shah at a rally on Sunday (April 11) said that he is ready to resign from his post only if the people of West Bengal ask him to do so.

The Home Minister also added that Chief Minister Mamata Banerjee will have to turn in her resignation on May 2 as the Trinamool Congress will lose the ongoing assembly elections.

In an earlier statement, the TMC chief had demanded Shah's resignation over the killing of four people in a firing by CISF personnel during the fourth phase of voting in Sitalkuchi in Cooch Behar district on Saturday.

"Didi has been asking for my resignation. If the people of West Bengal demand that I put down my papers, I am ready to do so with my head bowed. But Mamata will have to quit the CM's post on May 2," Shah said, while addressing a rally in Basirhat in North 24 Parganas district, according to news agency ANI.

Votes polled in the eight-phase elections to 294 assembly seats in West Bengal will be counted on May 2.

Training his guns on Banerjee, Shah alleged that she is opposing the Citizenship (Amendment) Act to appease illegal immigrants, who he claimed take benefits of welfare schemes but indulge in riots.

"What is Didi's problem if Matuas get citizenship? Her problem is that illegal immigrants will be displeased. Such people don't have the right to rule the state any longer. Illegal immigrants take benefits of welfare schemes like free ration and indulge in riots," he said.

Shah said that the BJP will completely stop illegal immigration from Bangladesh and withdraw a resolution passed in the assembly against CAA after forming the government in the state.

He also promised to introduce a 'Chief Minister's Refugee Welfare Fund' to give annual assistance of Rs 10,000 to the beneficiaries.

Battle of Bengal not a 50-50 contest anymore, heading towards regime change