Overnight, the S&P 500 rose to a near four-month peak while the Dow and the Nasdaq also gained. 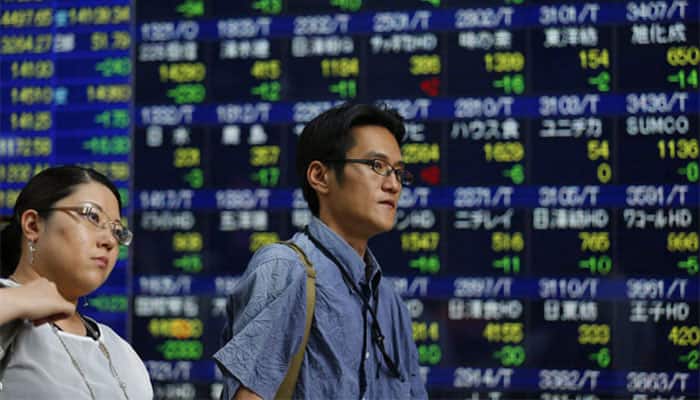 Sydney: Asian shares lost steam on Tuesday after scaling a five-month high as investors waited to see if Washington and Beijing can clinch a trade deal, while the pound advanced on hopes UK Prime Minister Theresa May will delay a Brexit deadline.

MSCI`s broadest index of Asia-Pacific shares outside Japan fell 0.5 percent from its highest since mid-September as U.S. and Chinese negotiators work to hammer out a deal that would end a protracted tit-for-tat tariff battle.

President Donald Trump said on Sunday he would delay a tariff hike on $200 billion of Chinese imports in the clearest sign yet that both sides were making progress in the talks, but he also sounded a note of caution, saying a deal "could happen fairly soon, or it might not happen at all."

Tuesday`s losses in Asian stock markets come as JPMorgan analysts urged investors to "curb some of their enthusiasm" over the trade talks, saying the extension to the deadline was a "foregone conclusion."

"Most assumed this action would occur," they added. "And it is notable that 1) no new deadline date has been set and 2) there weren’t any formal statements published from either side following the talks in Washington."

Chinese shares were in the red, too, with the blue-chip CSI300 slipping over 1 percent following a strong rally the previous day. Hong Kong`s Hang Seng index was off 0.6 percent.

Japan`s Nikkei fell 0.2 percent, after starting firmer as some selling pressure built ahead of the fiscal year-end.

Investors were also wary of weakening estimates for current quarter earnings, with Wall Street on Monday expecting a 0.9 percent decline in S&P first-quarter earnings per share compared with expectations for 5.3 percent growth on Jan. 1, according to IBES data from Refinitiv.

Overnight, the S&P 500 rose to a near four-month peak while the Dow and the Nasdaq also gained.

In currency markets, sterling jumped to $1.3149, a near four-week high, in early Asian trade after Bloomberg reported May was expected to allow her cabinet to discuss extending the Brexit deadline beyond March 29 at a crunch meeting later in the day.

The news was a relief to investors who had feared Britain would crash out of the European Union without a deal. However, a delay could anger May`s pro-Brexit colleagues who might then support a vote of no confidence in the government, potentially triggering a general election.

"News that Prime Minister May is considering the option of postponing Brexit given all the turmoil in parliament can hardly come as a big surprise," said Nick Twidale, analyst at Rakuten Securities Australia.

"However...details are few and far between. The market will seek further clarity over the coming sessions and if it is not forthcoming, sterling traders can expect more swings in the currency."

The dollar fell against the safe-haven Japanese yen from its highest since late December. The greenback was last at 110.79.

The dollar index eased a shade to 96.364 against a basket of currencies.

"The market will be looking for signs the Fed remains comfortable with the current state of policy," said Steven Dooley, currency strategist at Western Union Business Solutions. "The markets will also want to hear details about the eventual end of the Fed`s balance sheet reduction programme."

Investors will also keep an eye on a two-day U.S.-North Korea summit this week where leaders of the two countries will try to reach an agreement on Pyongyang`s pledge to give up its nuclear weapon programme.

Oil prices fell again after posting their largest daily percentage drop this year on Monday as Trump called on OPEC to ease its efforts to boost crude prices, which he said were "getting too high."

US public debt at record high above $22 trillion