Amid a high-voltage political drama in the state assembly, Karnataka Governor Vajubhai Vala on Thursday directed Speaker KR Ramesh Kumar to hold trust vote by the end of the day. 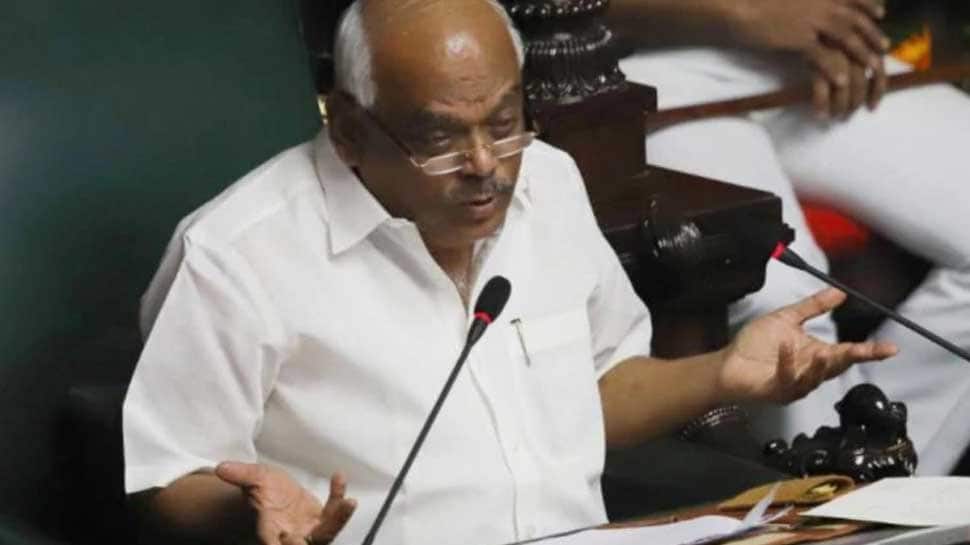 Bengaluru: Amid a high-voltage political drama in the state assembly, Karnataka Governor Vajubhai Vala on Thursday directed Speaker KR Ramesh Kumar to hold trust vote by the end of the day.

The Governor told the Speaker that the vote of confidence of Chief Minister HD Kumaraswamy-led coalition government should end by the day.

"The motion of confidence moved is in consideration at the house. Chief Minister HD Kumaraswamy is expected to maintain the confidence of the house at all times. I send a message to consider trust vote by the end of the day," the Governor said in a message to the Speaker.

Karnataka Governor to Assembly Speaker: Motion of confidence is in consideration at the house. Chief Minister is expected to maintain confidence of the house at all times. Consider trust vote by the end of the day. #KarnatakaTrustVote pic.twitter.com/MWeK3QmllH

All this came as the assembly took up a debate on the confidence motion moved by Chief Minister HD Kumaraswamy, which was necessitated by resignations submitted by several Congress-JD(S) MLAs bringing the ruling coalition in a minority.

Speaking in the assembly, Karnataka BJP chief BS Yeddyurappa also urged for the voting to be held today.

"Even if it is 12 midnight, let the trust vote be held today," he said.

Earlier in the day, a BJP delegation consisting of Jagadish Shettar, Arvind Limbavali, Basavaraj Bommai, SR Vishwanath and N Ravikumar met the Governor and submitted a memorandum over the vote of confidence.

As per the register of attendance, 20 MLAs were not present in the Assembly as the House took up the vote of confidence for debate.The MLAs who were absent include Byrathi Basavaraj, Munirathna, S T Somashekar, Ramesh Jarkiholi, Roshan Baig, Srimanth Patil, Anand Singh, B Nagendra, R Shankar, K Gopalaiah, Narayana Gowda, M T B Basavaraj, B C Patil, H Vishwanath, Mahesh Kumthahalli, Prathap Gouda Patil, Dr Sudhakar and Shivaram Hebbar.

Earlier, the Speaker had sought a detailed report from Home Minister MB Patil on rebel Congress MLA Shrimant Patil, who was admitted to a hospital in Mumbai after he complained of chest pain on Wednesday.

Expressing concern over the images shared in the House, Kumar observed that the situation "does not look natural".

"What kind of a Speaker I would be if I proceed with this document (letter sent by Congress MLA Shrimant Patil informing about his ill health) which has no date or letterhead," Kumar said in the Assembly.

"Please contact the family members of Shrimant Patil (Congress MLA) immediately. Give a detailed report to me by tomorrow. Ask them if they know anything about this. Has he had a medical problem in the past or is it the first time. it does not look natural. If Home Minister can`t ensure protection, I will talk to DGP," he said adding was there no hospital in Bengaluru for treatment.

Shrimant Patil, who was staying with other Congress legislators at Windflower Prakruthi Resort in Bengaluru, was admitted to a hospital in Mumbai today.

Kumaraswamy had on Wednesday issued a whip to all JD(S) MLAs including three rebel legislators Narayan Gowda, Gopalaiah and H Vishwanath to be present in the Assembly at the time of trust vote.

The Congress had issued a similar whip to its members including the rebels to attend the House.

The Supreme Court on Wednesday had observed that 15 rebel MLAs cannot be forced to take part in the proceedings of the House.

The 13-month-old Congress-JDS government had earlier this month slumped into crisis following the resignation of 10 MLAs.Sixteen MLAs from the ruling coalition including thirteen Congress and three JD(S) MLAs have resigned.

BJP has 105 MLAs in the 225-member state Assembly including one nominated MLA. The halfway mark is 113.