Governor Vajubhai Vala wrote a letter to CM Kumaraswamy asking him to prove majority on the floor of the House by Friday afternoon. Vala told Kumaraswamy to prove his government`s majority by 1.30 PM. 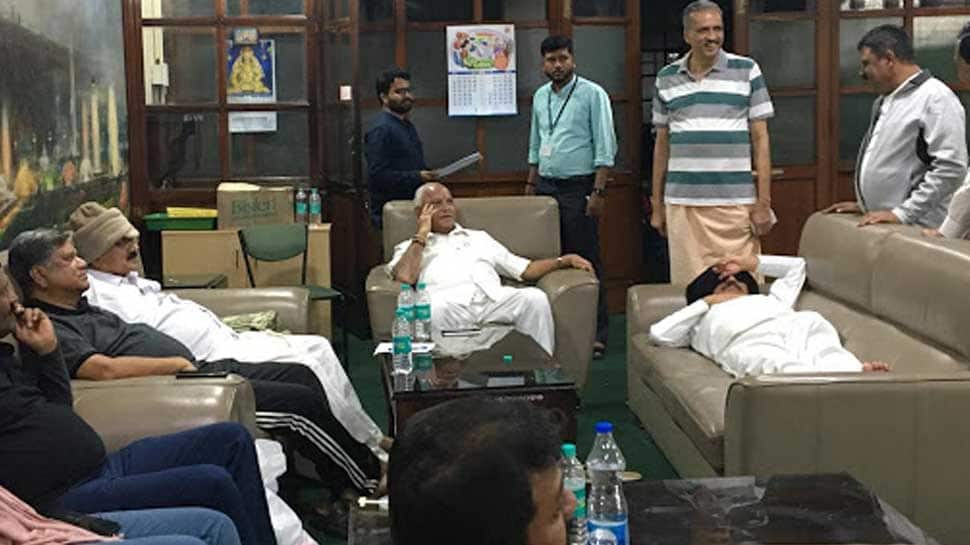 Bengaluru: The political slugfest in Karnataka continued on Thursday as the trust vote against the HD Kumaraswamy-led coalition government could not be taken up by the state assembly which was adjourned till Friday following a blame game between the ruling Congress-JDS and BJP legislators.

As a mark of protest, the BJP MLAs decided to sit on an overnight dharna outside the Vidhana Soudha to protest the adjournment of the house despite Governor Vajubhai Vala’s letter to Speaker KR Ramesh Kumar urging him to hold the trust vote on Thursday itself.

BJP leader and former chief minister BS Yeddyurappa said that his party members would stay put in the House overnight. "We will stay until the trust vote is decided," he said. 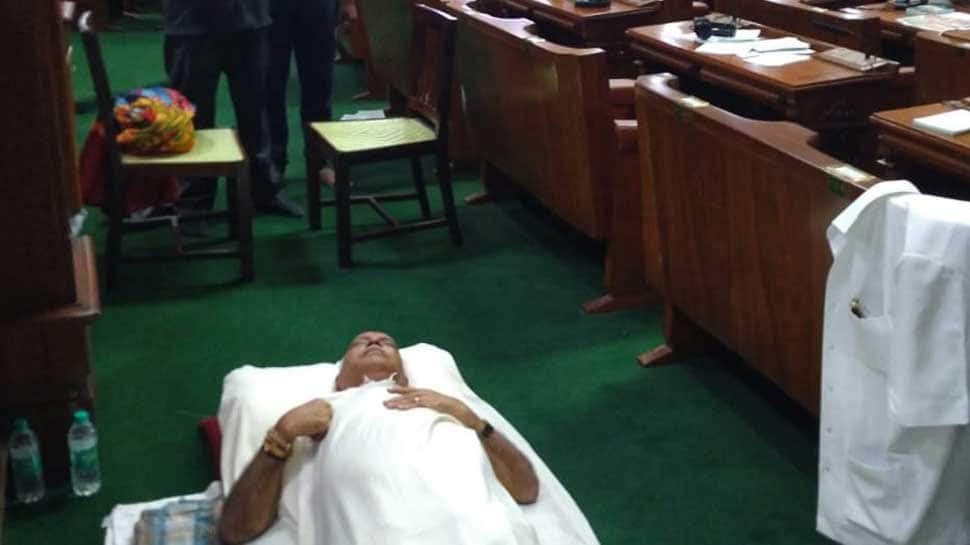 Several BJP MLAs were seen camping inside the Vidhana Soudha late in the night. The House was earlier adjourned for the day by the Speaker and will convene again at 11 AM on Friday for the normal business.

However, shortly after the Karnataka Assembly was adjourned without a trial of strength, Governor Vajubhai Vala wrote a letter to Chief Minister Kumaraswamy asking him to prove majority on the floor of the House by Friday afternoon. Vala told Kumaraswamy to prove his government`s majority by 1.30 PM.

Earlier in the day, Karnataka Governor wrote a letter to Karnataka Assembly Speaker KR Ramesh Kumar asking him to consider the possibility of holding the vote of confidence against the coalition government today itself (Thursday).

Minutes after the assembly session began, Kumaraswamy moved a one-line motion seeking a vote of confidence in his government from the House after Supreme Court (SC) pronounced its decision on rebel MLAs' resignations.

This was followed by an intense debate which saw the two sides accusing each other of horse-trading and conspiring to destabilise the Kumaraswamy government in Karnataka.

During the debate, BJP-led opposition alleged that the coalition government was trying to prolong the debate in the last-ditch effort to shore up its numbers.

Several ruling side MLAs, who had submitted their resignations to the Speaker since July 6, moved SC against Speaker KR Ramesh Kumar after he rejected the same claiming that he needs to be sure of the due process and that the resignations are 'voluntary and genuine' evoking Article 190(3b) of the Constitution.

The apex court had on Wednesday said that the MLAs of the Congress-JD(S) coalition in Karnataka should not be compelled to take part in the proceedings of the State Assembly in a defeat for the coalition government.

Ahead of the trust vote proceedings, Kumaraswamy issued a whip to all JD(S) MLAs including three rebel legislators Narayan Gowda, Gopalaiah and H Vishwanath asking them to be present in the Assembly at the time of trust vote.

The Congress too issued a similar whip to its members including the rebels to attend the House.

The 13-month-old Congress-JDS government had earlier this month slumped into crisis following the resignation of 16 MLAs. Sixteen MLAs from the ruling coalition including thirteen Congress and three JD(S) MLAs.

BJP has 105 MLAs in the 225-member state Assembly including one nominated MLA. The halfway mark is 113.

However, after the resignation of the 16 lawmakers, the strength of the ruling Congress-JD(S) coalition, which formed the government with 117 lawmakers in the 224-strong Karnataka Assembly, will be left with 101 compared to BJP’s 105.