As a proof, the website also posted a copy of an RTI reply on Kejriwal`s admission into IIT-K which showed that there is no record of the AAP chief`s rank card while the same is available for most of the students. 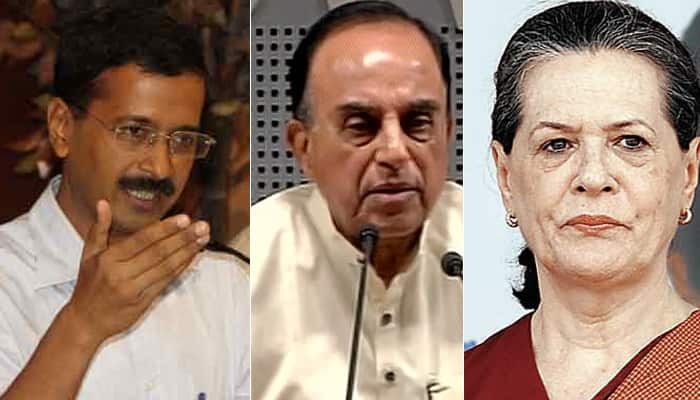 Thiruvananthapuram: Bharatiya Janata Party (BJP) leader Subramanian Swamy on Saturday launched a scathing attack on Delhi Chief Minister and Congress president, claiming that Arvind Kejriwal didn’t get a rank in Indian Institute of Technology (IIT) and that Sonia Gandhi had wanted to declare a state of Emergency in 2012.

“Last row of RTI column shows that Kejriwal has no rank (IIT).He probably came through other methods-Subramanian Swamy. In 2012, Sonia Gandhi had decided to declare a state of emergency in the country by cooking up false Hindu terror charges," ANI quoted Swamy as saying.

"According to the RTI reply on Kejriwal`s IIT entrance, it now turns out that Kejriwal did not come through the competitive exams. And you can see from the RTI in the last column that Kejriwal has no rank and that`s a clear sign that he came through some other method," he said.

Asserting that back in 1952 when the institute was set up the vacany was not given according to the order of marks, Swamy said that the seats were doled out illegally by the members of the managing board of the governors of IIT Kharagpur and it was stopped by the government in 2005.

"The man who talks about poor being denied the privileges, he himself is the product of these privileged and he has never owned it. He should have had the courage to admit. I Call upon Mr. Kejriwal to give this explanation. Did he come to IIT though merit or he got in by skulduggeries that used to take place," Swamy said.

This development comes in the wake of Kejriwal creating a furore over Prime Minister Narendra Modi`s degrees following which, a website named `thelotpot.com` reportedly made big revelations regarding his IIT-Kharagpur background.

As a proof, the website also posted a copy of an RTI reply on Kejriwal`s admission into IIT-K which showed that there is no record of the AAP chief`s rank card while the same is available for most of the students.

Earlier, in a press release, Swamy cited an RTI reply received from IIT-K to his query asking the institute to provide the basis of Kejriwal`s entry into B Tech programme and his All India Rank (AIR) in any competitive exam such as JEE, etc.

Swamy also claimed that he wasn’t targeting Arun Jaitley and that the latter looked good in a suit. Swamy claimed that reports that the party were angry with him were false.

“All such reports are false. I am addressing party meetings. These are rumours. If I want to target someone, I do it openly. In fact, Mr Jaitley looks very smart in a coat,” he added.