The cyclone made landfall near Puri at around 8 am on Friday. Chief Minister Naveen Patnaik, who reviewed the situation, said Puri district suffered huge damage.

Cyclone Fani, the most powerful tropical storm to hit India in 20 years, pummeled coastal Odisha on Friday but failed to cause widespread death and destruction as the Super Cyclone of 1999. While at least eight people died and several movable and immovable assets were destroyed due to Cyclone Fani which brought in massive rains and wind speeds of over 200 kmph in several coastal districts of Odisha, the toll was very low due to massive pre-emptive measures taken by the state government and other agencies.

The cyclone made landfall near Puri at around 8 am on Friday. Chief Minister Naveen Patnaik, who reviewed the situation, said Puri district suffered huge damage. "Energy infrastructure has been completely destroyed. Restoration of electricity is a challenging task," he said. Hundreds of engineers and technicians were working on a war-footing to restore power supply. Work is on to restore road communication, thrown into disarray with thousands of uprooted trees blocking the way in innumerable places, Patnaik said. The chief minister said since the cyclone is still passing through Odisha, it will take time to make an assessment of the damage.

An aerial survey by Indian Navy's Dornier aircraft showed that extensive destruction took place in many areas around Puri. A large number of trees and electric poles were uprooted creating roadblocks in the city limits of Puri. The rooftop of the Puri Railway Station was blown away, major damage was caused to the Bhubaneswar airport, Kalinga stadium and important educational institutions in the state capital. 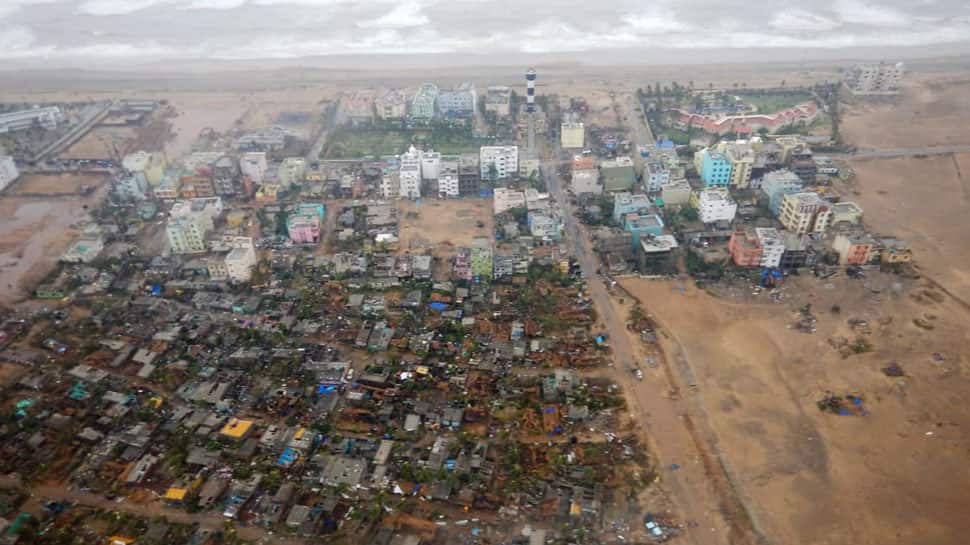 The strong winds also lashed at the All India Institutes of Medical Sciences (AIIMS) in Bhubaneswar causing extensive damage to the structure. A roof was blown off at the undergraduate hostel in AIIMS Bhubaneswar. Many water tanks have also been blown off, lighting poles came crashing down, and airconditioners damaged, informed Health Secretary Preeti Sudan. However, all patients, staff, students are safe. There are enough supplies ready to support the state, added Sudan.

At least eight people have been reported dead so far, senior officials said, adding information was still awaited from many areas. While three people, including a teenage boy, were reported killed in Puri district, three perished in Bhubaneswar and nearby areas. Flying debris from a concrete structure fatally struck a woman in Nayagarh. An elderly woman died of a heart attack at a relief shelter in Kendrapara district, official sources told news agency PTI. 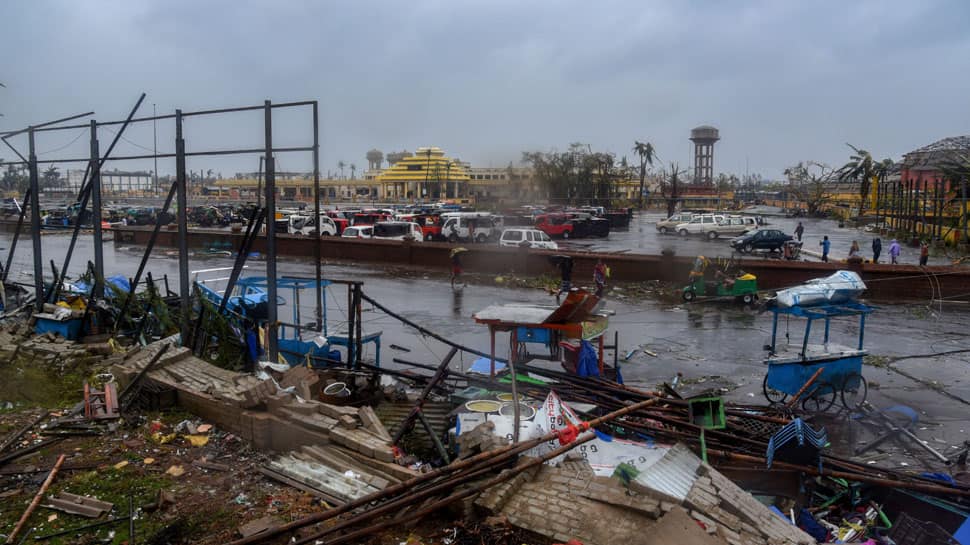 The chief minister said nearly 12 lakh people were evacuated and shifted to safer locations within 24 hours ahead of the cyclone from about 10,000 villages and 52 urban agglomerations in probably the largest such exercise at the time of a natural calamity in the country.

The evacuees have been accommodated in over 4,000 shelters, including 880 specially designed cyclone centres where free cooked food is being served to them, he said.

A police booth was dragged some 200 feet on a highway by furious winds, while a massive crane alongside a multi-storeyed under-construction building collapsed on a row of empty houses, jolted by the howling storm. Flight operations at Bhubaneswar airport remained suspended on Friday, while Paradip and Gopalpur ports were also closed as a precautionary measure. 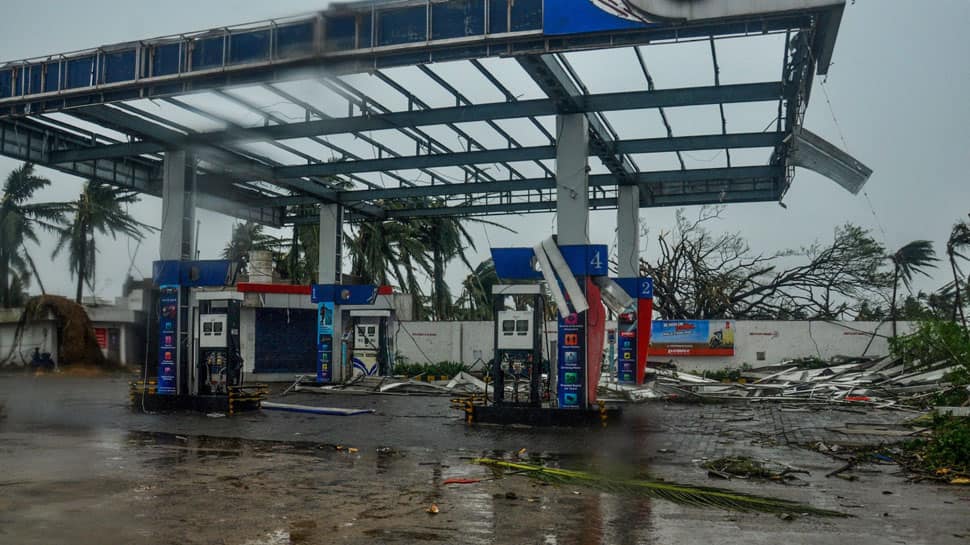 Around 220 trains on Howrah-Chennai route have been cancelled keeping in view passengers' safety, an East Coast Railway (ECoR) official said. A red alert has been issued in coastal areas and fishermen have been asked not to venture into the sea.

After clobbering Odisha, Cyclone Fani (Hood of Snake in Bengali), the storm moved towards West Bengal on Friday evening. The overcast sky in Kolkata and several other places was followed by heavy rains as evening descended.

But the eye of the storm weakened a few hours after the landfall, the meteorological department had said. The wind speed too came down to around 100 kmph to 110 kmph as Cyclone Fani moved towards West Bengal. 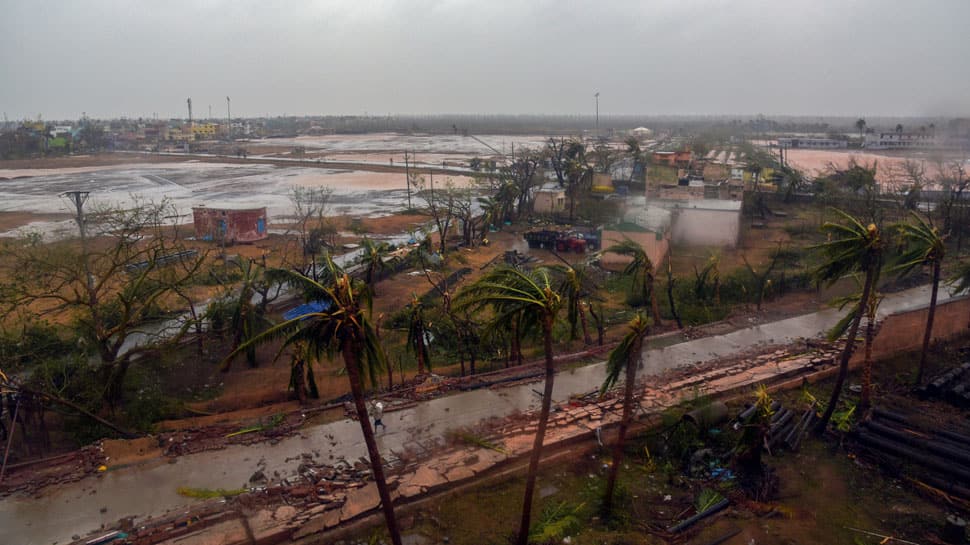 Several districts including East and West Midnapore, North and South 24 Parganas besides, Howrah, Hooghly, Jhargram, Kolkata and the Sundarbans are likely to be hit by the storm that will later move towards Bangladesh and taper off. No flights will depart from or arrive at Kolkata airport till 8 am on Saturday. 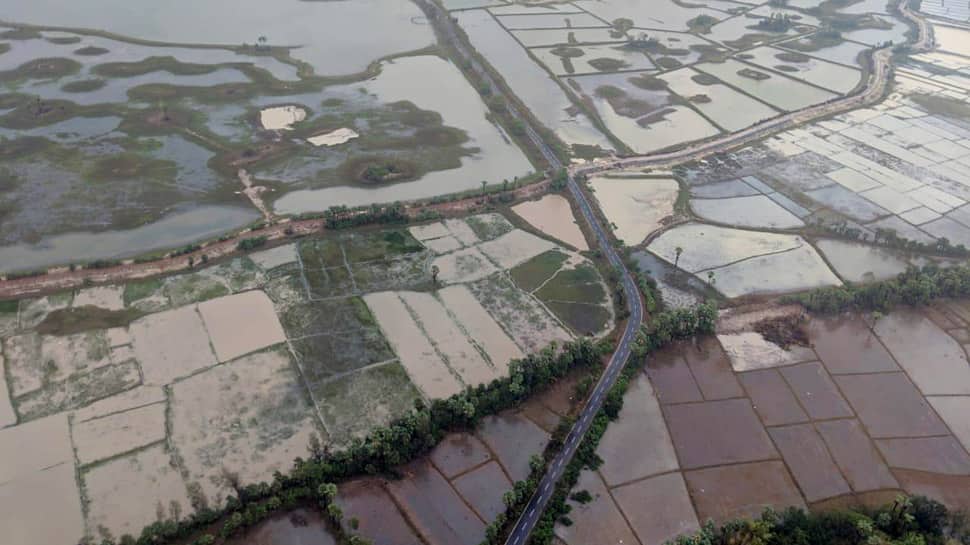 Prime Minister Narendra Modi on Friday announced that at least Rs 1000 crore have been released for states hit by Cyclone Fani. He said that the entire nation and his government are with the people in the Cyclone-hit states of Odisha, West Bengal and Andhra Pradesh. "We have gathered here today. At the same time, people living in coastal areas in eastern and southern India are facing an extremely severe cyclone. The centre is in continuous contact with governments in Odisha, West Bengal, Andhra, Tamil Nadu and Puducherry," said PM Modi.

Union Civil Aviation Minister Suresh Prabhu said that he has directed Ministry of Civil Aviation Secretary, Pradeep Singh Kharola, to continuously monitor the situation. Taking to Twitter, he also added that aviation regulator DGCA will issue revised advisories to airlines as and when necessary. He also assured of taking all possible steps for passenger safety and to minimise their inconvenience. 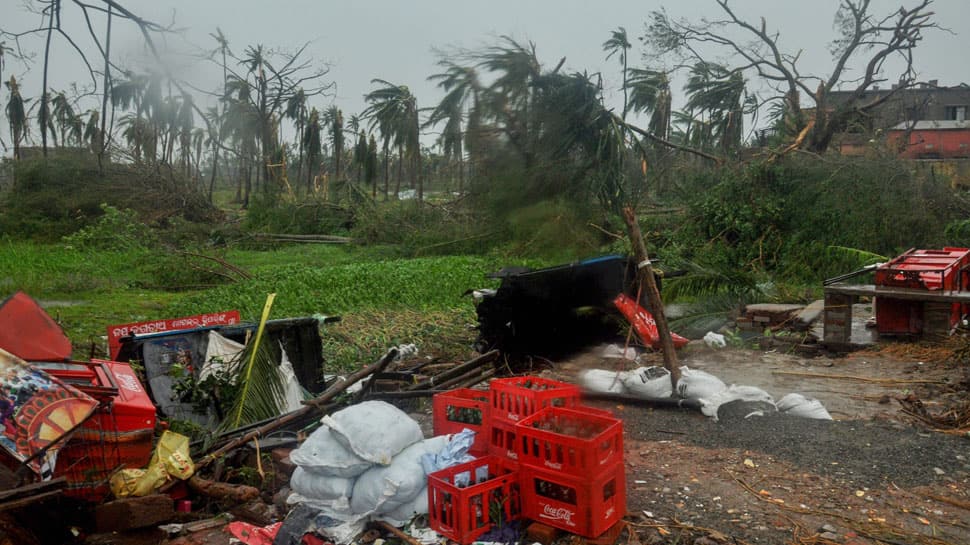 Almost 10,000 people were killed and hundreds of others went missing when the Super Cyclone made landfall on October 29, 1999. The massive death and destruction resulted in hundreds of storm shelters being constructed in coastal Odisha which have ensured that the death toll due to such natural calamities have been very small since then.