Sprint sensation Hima Das failed to finish her 400m heat as she suffered a back muscle spasm. 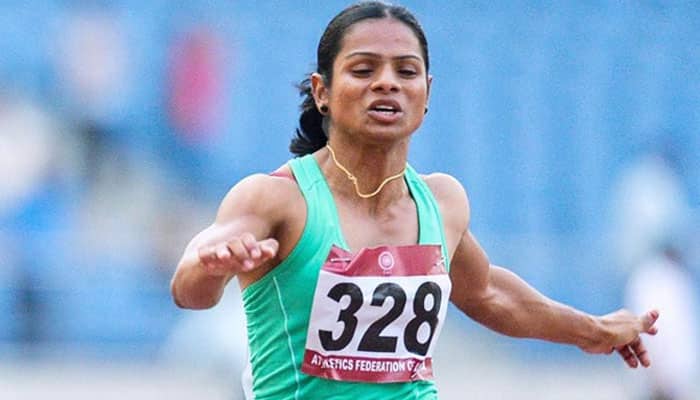 Doha: Dutee Chand smashed her own national record in the women's 100m dash heat to qualify for the semifinals while Hima Das suffered a back spasm to bow out of the women's 400m race on the opening day of Asian Athletics Championships here Sunday.

The 23-year-old Dutee clocked 11.28 seconds to win the heat number four of the women's 100m race and qualify for the semifinals. He bettered her earlier national record of 11.29 seconds which she set last year in Guwahati.

The Odisha runner, however, could not touch the 11.24-second qualification mark for the World Championships, to be held here in September-October.

In women's 800m, Gomathi Marimuthu clocked 2:04.96 to finish second in her heat and qualify for the finals. The other Indian in the event, Twinkle Choudhary, could not qualify for the semifinals after finishing fourth in her heat with a timing of 2:07.00.

Arokia Rajiv won his men's 400m heat with a timing of 46.25 seconds to advance to the semifinals while Anas clocked 46.46s to finish third in his heat and also advanced to the semifinals.
In men's triple jump, Chitravel finished ninth with a jump of 15.66m to qualify for the finals.

Sprint sensation Hima Das failed to finish her 400m heat as she suffered a back muscle spasm.

The other Indian in the fray, M R Poovamma (52.46 seconds) finished second in her heat behind gold medal favourite Salwa Naser of Bahrain to qualify for the final round.