During a bus journey to Ayodhya, Akshay Kumar was stunned by his co-stars Jacqueline Fernandez and Nushrratt Bharuccha's ability to apply make-up in a moving bus. He shared a video showing the two skilled beauties doing the same. 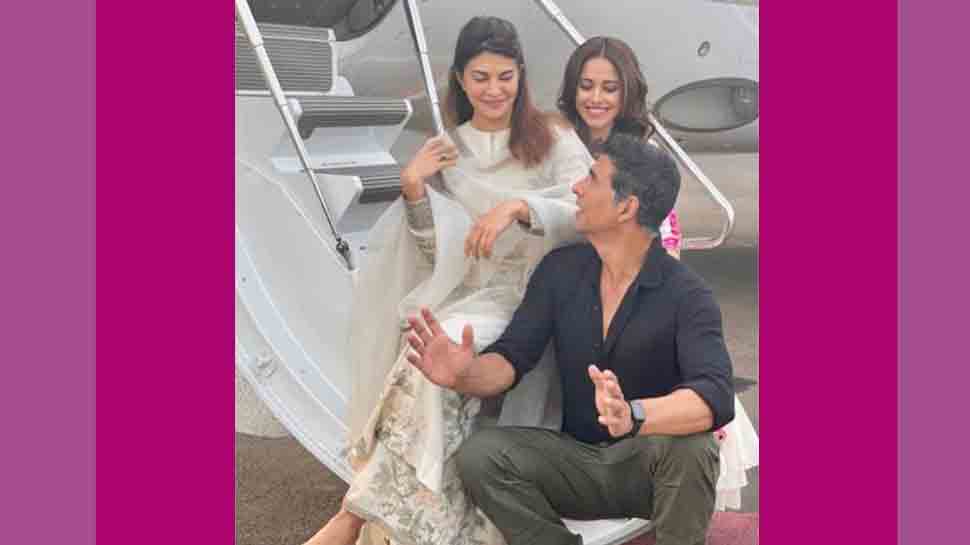 Mumbai: Actor Akshay Kumar, who recently touched down the holy city of Ayodhya, along with the entire cast and crew of his upcoming film 'Ram Setu', was left impressed by his co-stars Jacqueline Fernandez and Nushrratt Bharuccha after witnessing their ‘talents’. Recently, the trio travelled to Ayodhya for the film's mahurat puja and during their bus journey, Akshay recorded a snippet of a moment that left him genuinely impressed.

Akshay shared a hilarious video with fans on Instagram showing Jacqueline and Nushrratt acing up their make-up game. The camera first zooms in to Jacqueline who is seen highlighting her eyes with kohl. The camera then switches to Nushrratt, who was also caught giving a final touch-up to her lip shade. Dazzled by their skills, Akshay concluded the video by saying, “These girls have talents. Chalti hui bus mein yeh log apna make-up kar rahe he (They’re doing their make-up in a moving bus).”

The ‘Kesari’ actor jotted down an equally funny caption on the video, as he wrote, "Sharing the view on my left and right...our version of India’s Got Talent What say? @jacquelinef143 @nushrrattbharuccha."

Akshay, along with Jacqueline and Nushrratt, had recently travelled to Ayodhya for the muhurat shot of his upcoming film 'Ram Setu'.

The film is helmed by filmmaker Abhishek Sharma, who has previously worked on ‘Parmanu’ and 'Tere Bin Laden'. The action-adventure drama will be co-produced by Amazon Prime Video, Cape of Good Films, Abundantia Entertainment and Lyca Productions.

Before ‘Ram Setu’, Akshay Kumar will be seen in Rohit Shetty’s cop film ‘Sooryavanshi’ co-starring Ajay Devgn, Ranveer Singh, and Katrina Kaif. The much-awaited film is expected to hit the theatres on April 30, 2021.