Mumbai City climbed to the second spot with 16 points while FC Goa climbed from the bottom to seventh with 11 points, one more than NorthEast United FC. 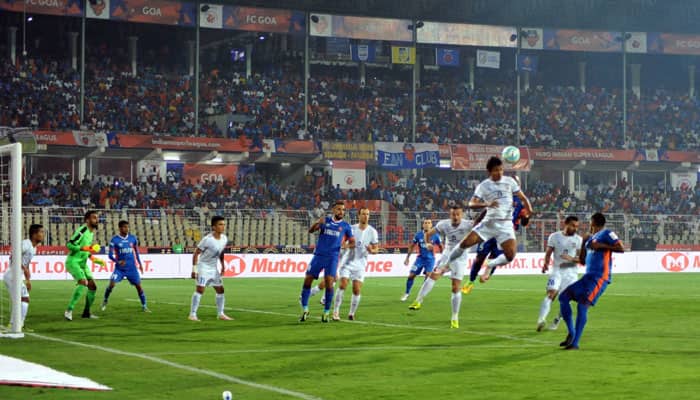 The draw did not enhance any team's chances of qualification to the semi-finals but with three matches still left to be played, neither team has been ruled out.

Mumbai City climbed to the second spot with 16 points while FC Goa climbed from the bottom to seventh with 11 points, one more than NorthEast United FC.

For the second successive game, FC Goa chief coach Zico started with several domestic players in his starting line-up. If he chose nine Indians against NorthEast United in the previous game, Zico opted to start with eight domestic players against Mumbai City FC and just three foreign players when rules allow him to use as many as six foreign players.

Mumbai City FC used their entire quota of international players and enjoyed more of the ball in the first 45 minutes. With players like Sunil Chhetri and Diego Forlan to count upon, Mumbai City repeatedly threatened, although these were the only two players who looked like breaking the deadlock.

Chhetri was the first to test Goa goalkeeper Laxmikant Kattimani with a left-footed shot that went straight to the keeper, who saved without much difficulty.

Forlan also tested Kattimani on a couple of occasions and twice he proved equal to the challenge. In the 27th minute when Chhetri put Forlan clear just outside the box, the Uruguayan striker delayed his shot, allowing Kattimani a simple collection. Towards the closing stages he tried his luck again but this time Kattimani was well positioned to parry the ball away for a corner kick.

FC Goa relied on counter attacks and had a couple of chances to draw first blood. Romeo Fernandes, who struck the match winner in the previous game, came closest to scoring when he was sent through by Rafael Coelho but his attempt hit the side netting in the 14th minute. Romeo and Rafael combined to create another opportunity in the 22nd minute but once again Romeo could not keep his attempt on target.

In the second session, Mumbai City came close to scoring several times. The best chance of the half came early in the game when Forlan beat Gregory Arnolin to the ball inside the danger area and set it up for Chhetri. The India captain shockingly missed his first attempt and his second shot hit a Goa defender before bouncing into the lap of Kattimani.

Forlan himself missed a glorious chance in the 65th minute. A brilliant ball from Krisztian Vadocz fell nicely for Forlan, who even beat the onrushing goalkeeper but defender Arnolin snatched the ball away from the goalline.

Even as Mumbai continued to apply pressure, Chhetri had a curling attempt saved by the keeper in the 83rd minute but it could have gone horribly wrong for the visitors had Goa?s Brazilian striker Julio Cesar given the finishing touches in the final minute when he had only the goalkeeper to beat from an excellent through ball.