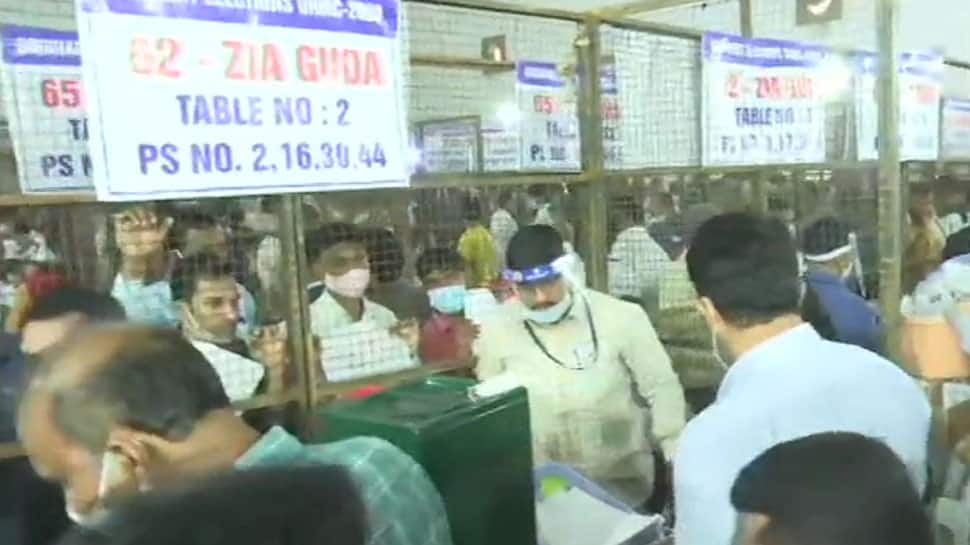 Since paper ballots were used in the elections, the results are likely to be known only late in the evening. Postal ballots were first taken up for counting. The authorities have arranged 150 counting halls with 14 tables in each hall.

State Election Commissioner C. Parthasarthy said a counting supervisor and two assistants were deployed at each table. Police have made elaborate security arrangements in the city in view of the counting.

Prohibitory orders and traffic restrictions were imposed around counting centres. Hyderabad, Cyberabad and Rachakonda police have imposed a ban on victory rallies for the next 48 hours.

Out of a total 74.67 lakh voters, 46.55 per cent has cast their votes in 149 divisions on Tuesday. Polling in one division was stopped due to discrepancy in the ballot paper and re-poll was held on Thursday. The day will decide the political fortunes of 1,122 candidates.

The polls assume political significance as 24 assembly segments fall under the GHMC limits. In the last GHMC elections in 2016, the ruling Telangana Rashtra Samithi (TRS) in the state had swept the election as it won 99 of the 150 wards.

The municipal elections are also crucial for the BJP as it has set itself the target of expanding its footprint in the state. The bitterly contested elections saw a high-decibel campaign with the participation of several central ministers and top national leaders of the BJP.

The party has drafted its general secretary Bhupendra Yadav, who was its in-charge for the Bihar assembly elections, to supervise the poll preparations in Hyderabad.

Congress, Majlis-e-Ittehadul Muslimeen (MIM) and Telugu Desam Party (TDP) were among the other major contesting parties. The campaign saw a no-hold-barred attacks by political opponents. Remarks by some leaders created controversies.

The promise by BJP leaders to change the name of Hyderabad to Bhagyanagar if the party voted to power also sparked a row. the saffron party has highlighted and attacked the alliance between the ruling TRS and All India Majlis-e-Ittehadul Muslimeen (AIMIM).

The BJP has sought votes to provide clean and transparent administration in the city. The TRS, however, denied any alliance with the AIMIM.

The Congress’ poll battle was led by its state president N Uttam Kumar Reddy and working president A Revanth Reddy (both MPs) and other senior leaders. The Telegu Desam Party (TDP), once a major force in the state, sought to revive its fortunes highlighting the development witnessed in the city, including in the IT sector, during N Chandrababu Naidu’s regime as the chief minister in undivided Andhra Pradesh.

In the 2016 elections, TRS had captured GHMC with a landslide majority of 99 in a 150-member body. The MIM was the second largest party with 44 seats, while the BJP was distant with only four seats.