Erdogan’s son-in-law Berat Albayrak, who last served as the Finance Minister of Turkey, has come under worldwide criticism for pocketing the money and mastering financial corruption. 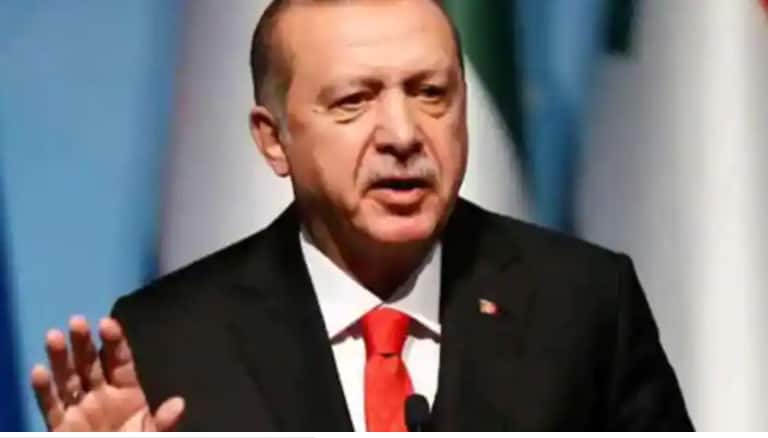 New Delhi: A corruption case involving Turkish President Recep Tayyip Erdogan's family has dented his efforts to claim the leadership of Muslim Ummah and has led to a powerful jolt at the domestic level. A case of brazen corruption has unfolded in Turkey involving Erdogan and folks indulging in money laundering and corruption. Erdogan’s son-in-law Berat Albayrak, who last served as the Finance Minister of Turkey, has come under worldwide criticism for pocketing the money and mastering financial corruption.

Berat Albayrak is also facing the charges of sharing dividends with the political elites, especially those in Erdogan’s Party (AKP). This case of money laundering was highlighted following the arrest of his aide Reza Zarrab in Miami in 2016.

The recent resignation of Albayrak citing his health issues was termed by the opposition party CHP as a ruse to get away after driving the country into a crumbling economy. Criticizing the leadership of Erdogan, it pointed out that Erdogan has been running the government and central bank as his family business.

The public anger against Albayrak was slowly brewing during his tenure because of his downplaying of the Turkish economy, devaluation of Lira against the Dollar, and his insensitive statement on a live broadcast yelling at the public - “whether they get their salaries in Dollars?”

The report published by the US Senate Foreign Affairs Committee –Democrats mentioned that Zarrab used Halkbank with due support from the Turkish government, especially from Berat Albayrak, and laundered Turkish gold in exchange for Iranian oil. He succeeded in circumventing the US sanctions on Iran by labeling his transactions for humanitarian causes such as food.

The arrest of Iranian-Turkish businessman Reza Zarrab has put Albayrak in a tough situation. Zarrab has confessed his crimes related to money laundering in a US court in New York. He revealed before the court that he and his security guard turned associate –Adem Karahan had the backing of Turkish bank Halkbank.

They had carried suitcases of gold to Iran, Turkey and Dubai. Later Karahan worked as a proxy for many companies that wired money via banks. It was found out that Reza Zarrab laundered a total of 20 billion dollars from 2010-2015 to facilitate Iran in escaping the US sanctions on its oil sales due to its advancement of the nuclear program.

Consequently, it turned out to be a great wealth generation business for Zarrab who used to charge 8% of the laundered amount as the brokerage charge. His accomplice Adem Karahan mentioned that out of this 8%, Zarrab shared 50% with the Turkish politicians that i.e., 4% of the 20 billion dollars, amounting to 800 million Dollars for each stakeholder – Zarrab and the Turkish politicians!

In the aftermath of Zarrab's arrest in Miami in 2016, Turkey intensified the lobbying to facilitate his release in the US. Turkish President Recep Tayyip Erdogan contacted American president Donald Trump for his release. Trump did not release Zarrab but fired Attorney Preet Bharara who brought the matter to light.

It is worth noting that Zarrab’s family had contacts with former Iranian President Mahmoud Ahmedinejad, as his father was a friend of the Iranian leader. While writing the letters to the former Irani  PM Ahmedinejad, Zarrab quoted his half a century old experience in foreign exchange management and directly pitched it to the Central Bank of Iran. As a follow up of this event, a meeting was arranged between Zarrab and the head of the Central Bank of Iran by his family’s acquaintance. This sanction busting scheme was fully backed by the corrupt Turkish government.

Initially, for the Iranian transactions, Zarrab wanted to open an account in Calik Holding’s Aktif Bank but was unable to do so. (Aktif Bank serves as the financial institution of Turkish conglomerate Calik Holding. The business group was owned by Erdogan’s close friend Ahmet Calik and Erdogan’s son-in-law Berat  Albayrak served as the CEO of the Conglomerate). Zarrab contacted the Minister for European Union Affairs in the Turkish government, Egemen Bagis for mediation. Bagis later facilitated a meeting with the Aktif Bank’s manager which led to the opening of the bank account In the bank.

After operating via a bank account in Aktif Bank, Zarrab scaled up the ladders of corruption and started to handle his transactions with a public bank of Turkey - Halkbank. Albayrak on his part ordered Halkbank to help Zarrab in his money laundering activities even though he was detained briefly in 2013 in Turkey. Albaryak was such a cash cow for the Turkish government that he was soon released after his arrest and the Turkish government quashed the investigation against him by punishing the officers involved in his arrest.

Prominent news portal Ahval news criticized the US President Donald Trump for his promise to stall any actions of indictment on the Turkish Halkbank. This course of the event can be traced back to Trump’s three meetings with Berat Albayrak in 2018-2019, when he was the Foreign Minister of Turkey.

Pelin Unker, who investigated the Paradise Paper Leaks, exposed that Berat Albayrak and his brother Serhat Albayrak had opened and operated offshore accounts in Malta. The Papers also named the former Prime Minister of Turkey Binali Yildirim for his association with the shell companies. Yildirim later admitted to his son’s involvement in the shell companies in Malta. The expose of this report led to Albayrak and Yildirim filling cases of defamation against Unker. A court sentenced Unker to 1.5 years of jail term and fined 8,600 Turkish Liras. The public uproar against this decision finally led to the case being dismissed by a court in Istanbul in 2019.

A report published by a Maltese newspaper Malta Today on May 22, 2017, clearly mentions that Berat Albayrak, along with his brother, set up eight shell companies in Malta in 2012 to evade tax for his company Calik Holding. Malta is a known tax haven for evaders from the European Union. According to the media report published in the European newspaper The Black Sea, Albayrak wanted to route the money from Dubai (Calik Enerji FZE’S holding estimated at 34.7 million dollars) to Turkey. But it involved paying a 20% tax and profit-sharing with the Turkish authorities.

The Foreign Affairs Director of Calik Holding, Safak Karaaslan advised Albayrak to use the Maltese route to cut down the tax deduction to 5% from the earlier 20%. Based on the advice, Albayarak further exploited the provisions of the Wealth Peace Act — an act drafted by Albayrak’s former colleagues from his firm Calik Holding, enabling him to tax-free repatriation of unlimited cash from offshore accounts.

Albayrak is not new to being engaged in a financial system catering to vested interest. Wikileaks mentioned his involvement in Powertrans, the oil company facing charges of importing oil from the terrorist group Islamic State of Iraq and Syria (ISIS) to generate revenue for their sustenance.

The basis of these allegations was the release of Albayrak’s mails by the cyber activist group Redhack. In contradiction to Albayrak’s denial of allegations, the mails mentioned his communication with Betul Yilmaz, the human resource manager of Calik Holding - where Albayrak served as the CEO, the mails stated Betul asking permission from Albayrak regarding hiring and salary distribution in Powertrans. The leaked emails spanned over a period of 16 years from 2000-2016, they clearly mention his influence over the political sphere and business lobbies.

The report also mentioned the state’s patronage to his activities when the Turkish government banned the import-export and transfer of oil and byproducts of the same on 11 November 2011. The government unilaterally allowed Powertrans to conduct its business without introducing any public tender. Following this move, Berat Albyarak became the Minister of Energy and Natural Resources in November 2015 and remained till July 2018.

With these exposes of corruption cases, civil liberties groups in Turkey have begun protesting against the practice of sheer nepotism and favouritism in Erdogan’s government. It has also provided the opposition an opportunity to demand resignation from Erdogan. However, the biggest casualty of these revelations has been the Caliphate project of Erdogan.