The "yellow vest" protesters were back on the streets across France two days after the president outlined policy proposals including tax cuts worth around 5 billion euros ($5.58 billion) in response to the protests. 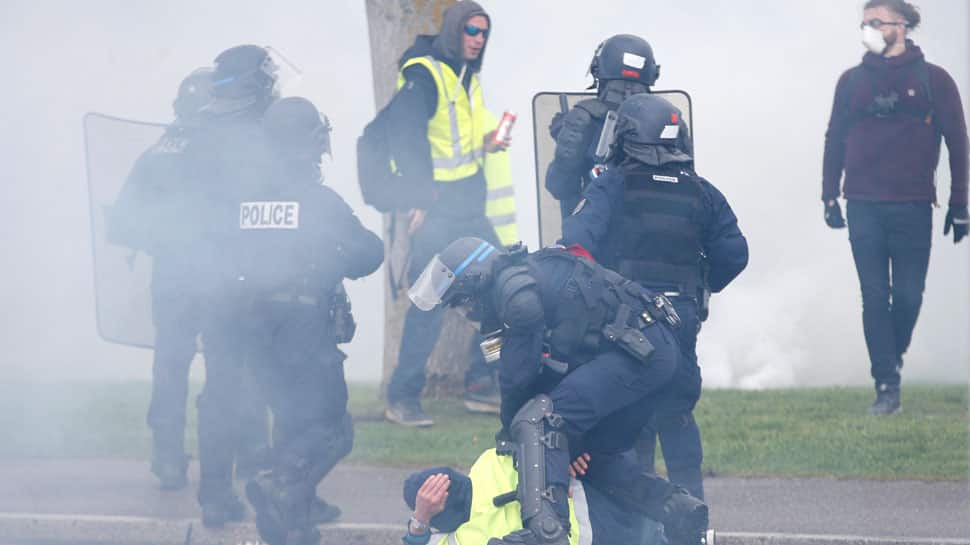 PARIS: French police fired tear gas to push back protesters who tried to march towards the European Parliament building in Strasbourg on Saturday, the 24th consecutive weekend of protests against President Emmanuel Macron`s policies.

The "yellow vest" protesters were back on the streets across France two days after the president outlined policy proposals including tax cuts worth around 5 billion euros ($5.58 billion) in response to the protests.

Around 2,000 demonstrators gathered near European Union institutions in Strasbourg, with organisers hoping to make the protest international by marching to the parliament building a month ahead of EU-wide parliamentary elections.

Previous yellow vest protests in the eastern city have mostly been peaceful. But concerned about the violence and destruction of public buildings that have marked some yellow vest demonstrations in other parts of the country, authorities had banned protests and barricaded the neighbourhood where the parliament and other EU institutions are located.

Police fired several canisters of tear gas to push back the demonstrators, a Reuters witness said. French television showed some hooded protesters throwing stones and other objects back at the police.

The Interior Ministry said around 23,600 protesters took part in marches across the country, including 2,600 in Paris, compared with around 28,000 a week earlier. That was the second lowest turnout since the protests started in November.

The protests, named after motorists` high-visibility yellow jackets, began over fuel tax increases but morphed into a sometimes violent revolt against politicians and a government they see as out of touch.

Many in the grassroots movement, which lacks a leadership structure, have said Macron`s proposals this week did not go far enough and lacked details.

Saturday`s protests in Paris, which has seen some of the worst violence in past demonstrations, was jointly organised with the leftist trade union confederation CGT and was mostly calm. Protesters also gathered in Lyon and Bordeaux.

Protester numbers have dwindled from highs of over 300,000 nationwide at the peak in November to below 30,000 in recent weeks, according to government estimates.

Pervez Musharraf may return to Pakistan on May 1: Lawyer