Abahani's Wellington Priori deflected into his own net in the 79th minute to the glee of the Chennaiyin supporters at the TransStadia Arena here. 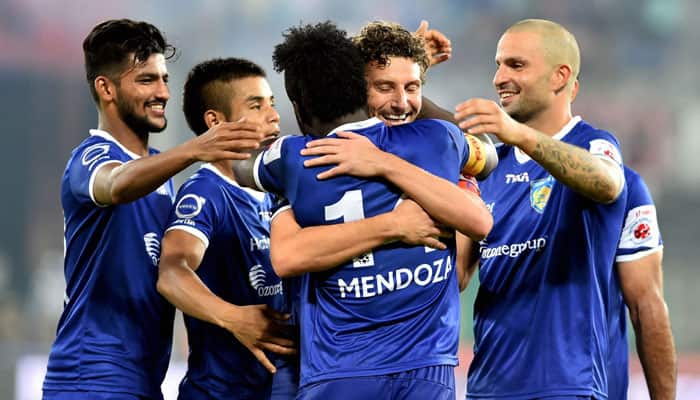 Ahmedabad: A late own goal conceded by Abahani Limited Dhaka was enough for Chennaiyin FC to notch up a 1-0 win and pull clear at the top of Group E in the AFC Cup here on Tuesday.

Abahani's Wellington Priori deflected into his own net in the 79th minute to the glee of the Chennaiyin supporters at the TransStadia Arena here.

The 2017-18 Indian Super League champions now have seven points from two wins and a draw to move on top of the group while Abahani remained at second spot with four points (one win, one draw and one loss).

Only the group winners will qualify for the Inter-Zone Play-off semifinals.

The visiting Bangladeshi side made a bright start and Kervens Belfort flashed a header wide from Rubel Miya's corner in the second minute.

It took 21 minutes for the home side to pose a real threat to Abahani as Mailson Alves' powerful header brought a fine save from Shahidul Alam.

Abahani came close again as Sunday Chizoba's shot had to be deflected behind by Mailson in the 27th minute.

After a few minutes, India striker Jeje Lalpekhlua turned smartly on the edge of the Abahani penalty box but he pulled his shot wide as Chennaiyin struggled to trouble the away side's defence. Dhanpal Ganesh came closer on the stroke of half-time when he headed Jerry Lalrinzuala's corner narrowly wide.

Abahani created the first chance of the second half when Belfort headed Sohel Rana's cross past the post. Nabib Newaz Jibon then managed to get a free-kick on target in the 64th minute but the effort was comfortably saved by Singh.

At the other end, Eli Sabia rose to meet India midfielder Anirudh Thapa's floated free-kick but his header went straight into the arms of Alam.

Chennaiyin wasted another good opportunity with 15 minutes remaining as Mailson headed over from Isaac Vanmalsawma's corner.

The home side finally made the breakthrough in the 79th minute. Thapa did well to collect the ball on the left and beat a defender. He tried to cut the ball across goal but Wellington Priori got in the way and deflected the ball into his own net.

Abahani battled to the end but failed to create any clear chances to level the score as the Indian Super League side moved three points above them in the group.

The two sides meet again in their next match on May 15 in Dhaka.