Vardy sealed the home side`s win with a scrambled close-range finish in the 86th minute, lifting Leicester into the 10th position and leaving Fulham second bottom and staring at relegation. 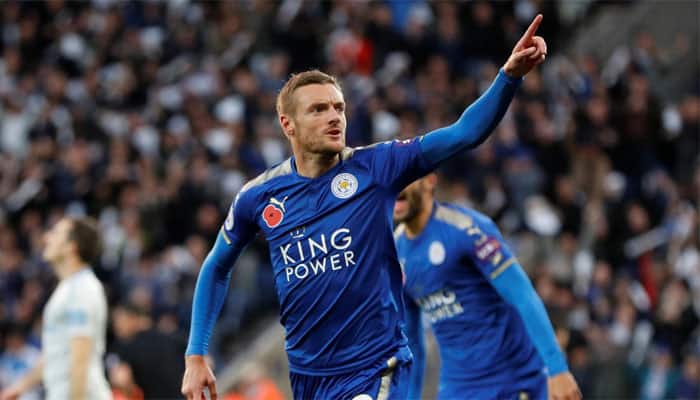 Jamie Vardy scored his 100th and 101st goals for Leicester City to seal a 3-1 home Premier League win over Fulham on Saturday and give Brendan Rodgers his first win as manager of the club.

Rodgers, who started his tenure with a 2-1 defeat at Watford, was able to breathe a sigh of relief as England striker Vardy scored twice in the closing stages after setting up his team`s opener.
"We`re trying to win the ball back as quickly as possible," Vardy told the BBC.

"It’s definitely benefited me, but there’s a lot more hard work to come.

"We knew Fulham were going to cause us problems - we`ve been working on that. For the majority of the game we got the plan spot on."

"I think the first goal typifies the selflessness of Jamie Vardy," he said.

"He was in on the keeper for his 100th goal but he squares it for Youri (Tielemans) to finish and that tells you everything about him.

"I thought we were good in the first half but the equaliser gave Fulham a bit of momentum. Huge credit to the players, I am very happy for them."

Leicester took the lead in the 21st minute when Vardy beat the offside trap and laid the ball on to Belgian midfielder Tielemans, who is on loan from Monaco, and he netted his first Premier League goal with a simple tap-in.

Substitute Floyd Ayite equalised shortly after the break when he surged into the penalty area and beat goalkeeper Kasper Schmeichel with a shot which took a deflection off two Leicester defenders.

Both keepers made good saves before livewire Vardy restored Leicester`s lead with a trademark finish in the 78th minute, drilling in a low shot past Sergio Rico from inside the penalty box.

Vardy sealed the home side`s win with a scrambled close-range finish in the 86th minute, lifting Leicester into the 10th position and leaving Fulham second bottom and staring at relegation.