Army Chief General Bipin Rawat on Sunday lauded the India security forces for giving a befitting response to ceasefire violation and unprovoked firing by Pakistani troops in the Tangdhar sector near Line of Control on Sunday. 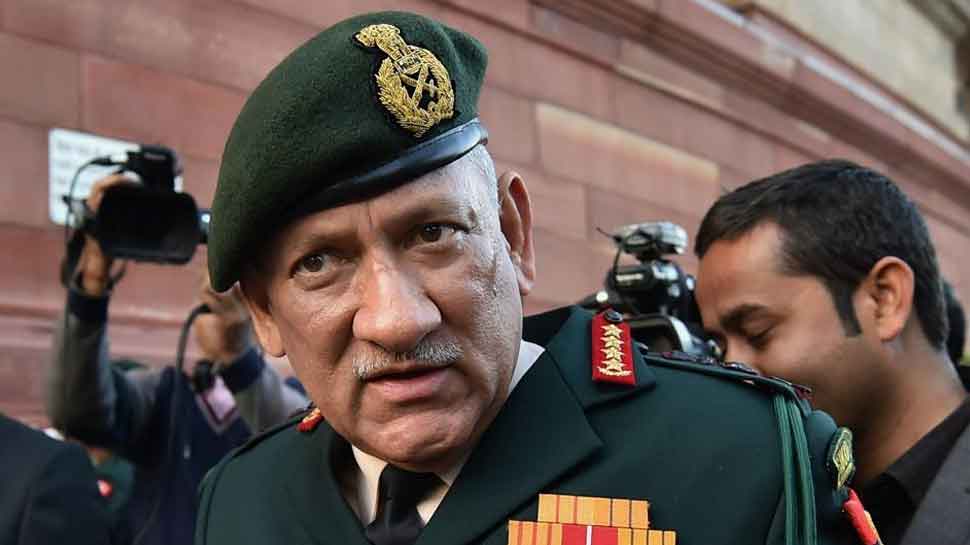 NEW DELHI: Army Chief General Bipin Rawat on Sunday lauded the India security forces for giving a befitting response to ceasefire violation and unprovoked firing by Pakistani troops in the Tangdhar sector near Line of Control on Sunday.

''Last evening, an attempt was made in Tangdhar to infiltrate terrorists. We retaliated, Pakistan carried out attack firing at our posts in which we did suffer, but before they could attempt the infiltration it was decided that we target the terror camps in PoK. We had the coordinates of these camps. We have caused severe damage to terrorist infrastructure across,'' Gen Bipin Rawat said.

''At least 6-10 Pakistani soldiers have been killed and several terror camps have been destroyed in 'PoK,'' he added.

Gen Rawat said that ever since Article 370 was abrogated from J&K, there has been a surge in infiltration attempts by terrorists from across the border to disturb peace and harmony in the state.

''Gradually things are returning to normalcy in the Valley, but obviously there is somebody who is working behind the scenes at the behest of terrorists and agencies that are within and outside Pakistan and PoK, which are trying to disrupt the peaceful atmosphere,'' the Army Chief said.

The Army Chief earlier spoke to Defence Minister Rajnath Singh and briefed him about the situation after the Indian Army, responding to ceasefire violation by Pakistani troops, destroyed four terror launch pads in PoK and killed at least 20 terrorists in artillery gun attack.

The Defence Minister, who is personally monitoring the situation, had asked the Army Chief to keep updating him over it.

The counter-attack by the Indian Army came after the Pakistani troops violated the ceasefire and resorted to unprovoked firing targeting the civilian areas in Jammu and Kashmir`s Tangdhar sector on Sunday morning.

Two Indian soldiers and one civilian were killed, while three other civilians were injured in the firing from the Pakistan Army in Tangdhara sector of Kupwara.

The Indian Army gave a befitting response to the unprovoked ceasefire violation by the Pakistan forces.

The Indian side escalated the scale of attacks and started targetting the terrorist camps situated inside PoK in retaliation to the support provided by Pakistan Army to push terrorists into Indian territory.

According to sources, six to ten Pakistan Army soldiers were killed and several others injured after Army launched artillery gun attacks on terrorist camps situated in Jura, Athmuqam and Kundalsahi in the Neelam Valley in PoK.

The Indian Army used 155 mm Bofors Guns in the operation in which several Pakistani Army bunkers were also completely destroyed.

However, during the ceasefire violation by Pakistan, two Indian soldiers and a civilian were killed in Tangdhar sector of Kupwara in Jammu and Kashmir.

"Indian forces caused heavy damages and casualties to Pakistan after two Indian soldiers and one civilian were killed in ceasefire violation by Pakistan Army in Tangdhar sector," an Indian Army spokesperson said.

The disturbances on the Indo-Pak border began a day ahead of Defence Minister Rajnath Singh and General Rawat's scheduled visit to Northeastern Ladakh on Monday to inaugurate a strategically located bridge at the fag end of the newly-constructed all-weather motorable road linking Darbuk in Leh with Daulat Beg Oldi near the Karakoram Pass near the Line of Actual Control (LAC) with China.

The bridge has been named after a highly-decorated soldier of the Indian Army, Colonel Chewang Rinchen, who belonged to Ladakh.