Team India will have their task cutout against Zimbabwe on Sunday (November 6) in their last Super 12 clash of the T20 World Cup 2022. If India lose, they will be in danger of getting knocked out of the tournament. Rohit Sharma's men will need to ensure their campaign is on track. Zimbabwe, not to forget, have aleady caused an upset in the tournament when they beat Pakistan earlier. Pakistan have got a new life in the tournament with big win over South Africa. They have a healthy NRR and based on that they can knock either South Africa or India out, if other results are in their favour. (Virat Kohli's 'FAKE fielding' controversy: Bangladesh cricket board to take ACTION, check details HERE)

The match will be played at the MCG. Melbourne has had its share of rain during this tournament. Will the weather play a big role on Sunday's T20 World Cup clash between India and Zimbabwe too? Chances are less. As per Accuweather, there is only 0 percent chance of rain while the afternoon and evening are expected to remain free of rain. Conditions might remain cloudy but there is no rain forecart in Melbourne for November 6. 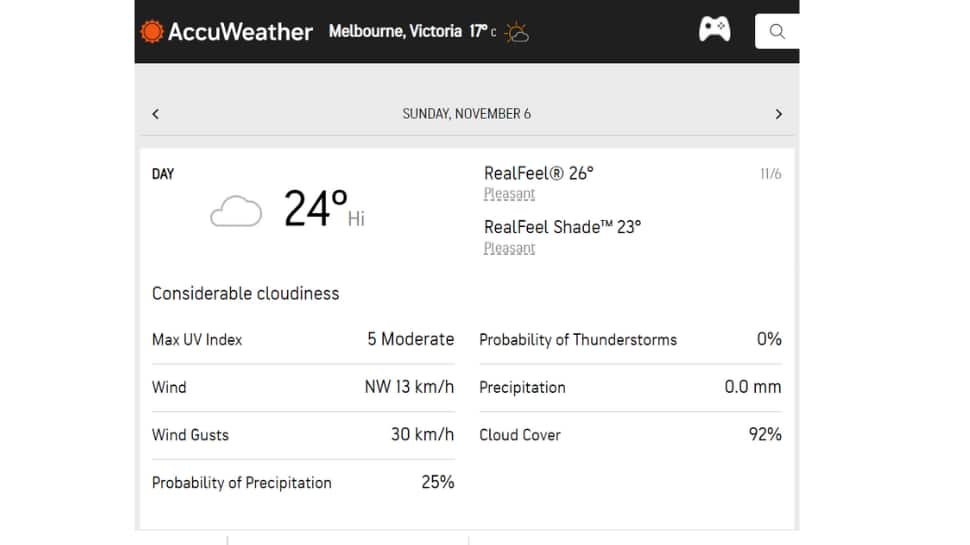 What happens if it rains in IND vs ZIM match?

ICC has kept no reserve days for group matches if they are washed out. In case it rains in IND vs ZIM match, the two teams will share a point each. That means India will jump to 7 points and qualify for the semi-finals. That is because South Africa are on 5 points currently, a win against Netherlands takes them to 7. Pakistan, even if they beat Bangladesh, can make only 6 points. Bangladesh too can, at best, jump top 6 points. Hence, India will qualify if it rains in Melbourne on November 6 (Sunday).

The weather apps say that it won't rain and India will be able to a full game. They would want to qualify only after beating Zimbabwe as it will give them more confidence and momentum heading into the semi-finals.