A PIL has been filed in SC seeking a judicial probe into violence during farmers' tractor rally in Delhi. The PIL has been filed by an advocate, who has demanded a judicial probe into Tuesday’s violence and chaos in the national capital. The petitioner has demanded the top court to constitute a three-member panel of retired judges to probe the case 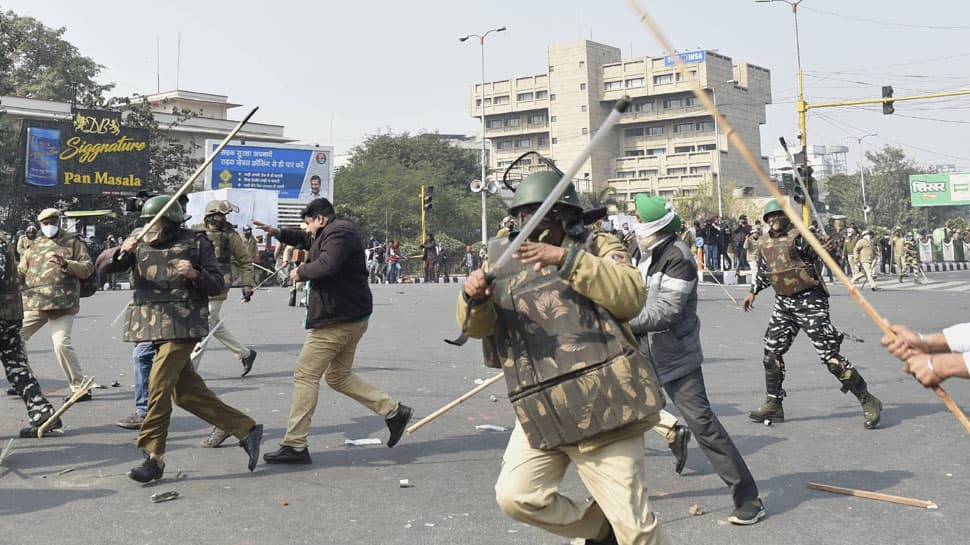 NEW DELHI: A PIL has been filed in the Supreme Court seeking a judicial probe into the violence unleashed after the farmers’ tractor march in the national capital and dishonouring the national flag at the historic Red Fort.

The PIL has been filed by an advocate, who has demanded a judicial probe into Tuesday’s violence and chaos in the national capital. The petitioner has demanded the top court to constitute a three-member panel of retired judges to probe the case.

The petitioner also urged the top court to direct the police to register FIR in connection with the Delhi violence case and arrest those responsible for the mayhem on the Republic Day. Amid all this, Delhi Police has registered 22 FIRs in connection with the violence which broke out during the farmers' tractor rally in the national capital on Tuesday.

The tractor rally by farmers saw violence at several places in Delhi as protestors clashed with police and broke barricades. Protesters breached the Red Fort premises and waved flags they were carrying from its ramparts.

Violence erupted near the ITO area of the national capital as tractors driven by protestors tried to scare and even run over police personnel deployed in the area. Metro services were stopped at multiple stations and traffic on roads were also diverted.

Union Home Minister Amit Shah met senior officials from the Home Ministry to take stock of the law and order situation in the national capital, following the violence. During the meeting, the decision to deploy additional paramilitary personnel was taken. The meeting was attended by Union Home Secretary Ajay Bhalla, Delhi Police Commissioner SN Shrivastava among others.

Shah is also understood to have directed the Delhi Police to identify and take action against those involved in the violence. Additional paramilitary troops will be brought in for deployment in sensitive places in Delhi, a senior Home Ministry official said.

The exact number of additional troops was not known immediately, but officials suggested that it could be around 1,500 to 2,000 personnel (about 15 to 20 companies). Around 4,500 paramilitary personnel were already deployed for law and order duties ahead of Republic Day.

Farmers have been protesting on the different borders of the national capital since November 26 against the three newly enacted farm laws - Farmers' Produce Trade and Commerce (Promotion and Facilitation) Act, 2020; the Farmers Empowerment and Protection) Agreement on Price Assurance and farm Services Act 2020 and the Essential Commodities (Amendment) Act, 2020.

Several routes closed in Delhi-NCR, check traffic police advisory before you step out of your home