Lok Sabha election results 2019 shows BJP leading in Rajasthan as counting of the votes progressed. The latest trends point to a landslide victory for the saffron party in the desert state, a repeat of 2014 when it swept all the 25 seats. 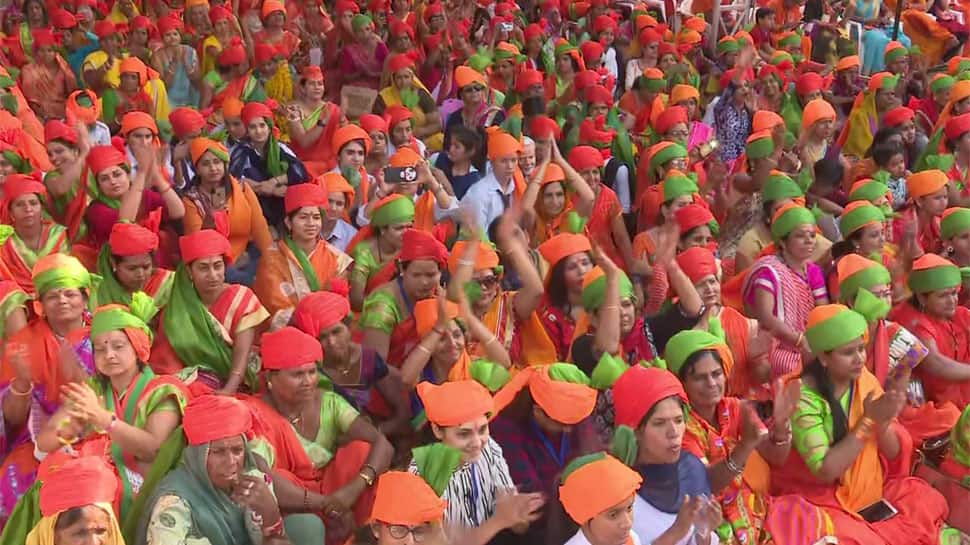 Lok Sabha Election Result 2019: Riding on a massive Modi wave, the Bharatiya Janata Party swept Rajasthan once again in the Lok Sabha election results 2019 Thursday, five months after losing to Congress in the state Assembly polls. The party has won 24 of total 25 Lok Sabha seats in the state while ally Rashtriya Loktantrik Party won the other seat.

Thank you for joining us for the updates on Rajasthan Lok Sabha election 2019 results.

* The BJP has won in all the 24 constituencies in Rajasthan, Rashtriya Loktantrik Party's HANUMAN BENIWAL has won from Nagaur constituency.

* "The people of India became Chowkidars and rendered great service to the nation. Chowkidar has become a powerful symbol to safeguard India from the evils of casteism, communalism, corruption and cronyism," tweets PM Modi. "Now, the time has come to take the Chowkidar Spirit to the next level. Keep this spirit alive at every moment and continue working for India’s progress. The word ‘Chowkidar’ goes from my Twitter name but it remains an integral part of me. Urging you all to do the same too!," he added.

The people of India became Chowkidars and rendered great service to the nation. Chowkidar has become a powerful symbol to safeguard India from the evils of casteism, communalism, corruption and cronyism.

* Congress chief Rahul Gandhi congratulates Narendra Modi during a press brief in New Delhi. The BJP has swept all 25 seats in Rajasthan.

* The BJP has won one seat in the state and has maintained a comfortable lead in 23 out of 25 seats. BJP ally Rashtriya Loktantrik Party also ahead in the other seat.

* "Heartiest congratulations to Shri Narendrabhai Modi for steering the BJP towards this unprecedented victory in the elections. Shri Amitbhai Shah as the BJP President and all the dedicated workers of the party have put in enormous effort in making sure that the message of BJP reaches every voter of the country," Advani said in a statement.

* In the Bikaner seat, Union minister Arjun Ram Meghwal is leading by more than 2.60 lakh votes over his cousin and former IPS officer Madan Gopal Meghwal.

* Dushyant Singh, the son of former chief minister Vasundhara Raje, is leading by over 4.30 lakh votes and is all set to get elected for the fourth time from Jhalawar seat. The Congress had fielded Pramod Sharma, who had joined the party from the BJP.

*  As the BJP heads for a clean sweep in the Lok Sabha elections in Rajasthan, Chief Minister Ashok Gehlot Thursday said the people's mandate has to be accepted. "We accept the people's mandate with humility. The Congress has always worked to build a strong democracy. I thank the people of the state and Congress workers for a peaceful participation in polling," Gehlot said.

* "Together we grow, together we prosper, together we will build strong and inclusive India. India wins yet again: PM on poll results," tweets PM Modi

Together we will build a strong and inclusive India.

* BJP candidate Swami Sumedhanand wins with a margin of 2,51,909 votes against Congress' Subhash Maharia from Sikar.

* "The BJP under the leadership of its president Amit Shah and PM Modi has reached new heights. I would like to thank the voters of Rajasthan," says former Rajasthan chief minister and senior BJP leader Vasundhara Raje at state BJP headquarters here.

* "Once again people have reposed their confidence in BJP and Modi in a big way. The trends indicate unambiguously that grammar of politics is under transformation," says BJP's vice president Vinay Sahasrabudhe.

* The Parliamentary Board of BJP will meet today evening. PM Modi is likely to address the party workers here at 5.30 pm.

Slept well like always, woke up easy, put on music, did a few rounds of SuryaNamaskars, opened my window to the world and the world says #ModiAaRahaHai #Electionsresults2019

* "There's no alternative to this new politics. The entire credit goes to team captain," says BJP's Rajyavardhan Rathore. He is leading from Jaipur Rural.

* BJP has allied with Hanuman Beniwal's Rashtriya Loktantrik Party (RLP) in a bid to woo the Jat community in the state. Beniwal is leading from Nagaur.

* BJP now leading on 16 seats, Congress on one

* Early trends show BJP leading in 17 seats, Congress on one

* Congress takes early lead, ahead in one seat in Rajasthan

* Lok Sabha Election Result 2019: Counting begins at 8 am in Rajasthan

* Exit polls suggest a massive win for the BJP in Lok Sabha election result 2019 from Rajasthan. Republic-CVoter has predicted 22 seats out of 25 for NDA and three seats for UPA while ABP-CSDS says BJP is likely to win 19 seats in Rajasthan and Congress may get the remaining six seats. News 18-IPSOS has also predicted 22-23 seats for the saffron party and 2-3 seats for Congress. India TV-CNX says BJP will win 21 seats while Congress will win four. Aaj Tak-Axis says BJP will win with 23 to 25 seats while just two seats are likely to go to Congress.

* The electoral process was largely peaceful baring a few incidents of violence on the second day of polling in the state. Four places saw poll boycott over demands on development but voters were later persuaded to vote. Two incidents of damaging ballot units were reported in Barmer and Ajmer. Bharatiya Janata Party (BJP) supporters along with few members of Kalbi community allegedly pelted stones at the vehicle of the Congress' Jalore candidate, Ratan Dewasi.