According to Delhi Police, Disha Ravi had asked the Swedish environmental activist to delete her post fearing action under the stringent law UAPA as her name was mentioned in the document. Police claimed that Thunberg allegedly deleted the tweet following Disha's request and later, shared an edited version of the document. They also claimed that the edits were made by 22-year-old Disha. 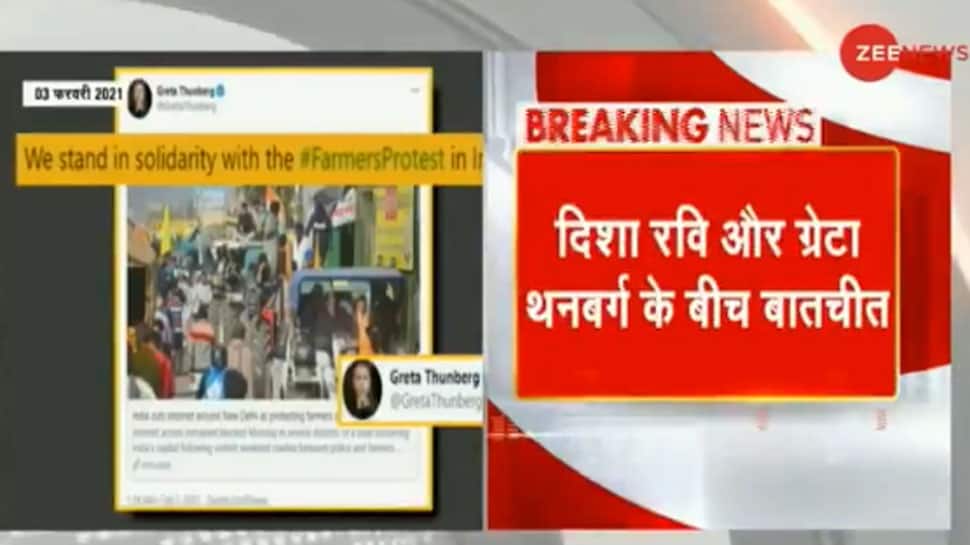 After the Swedish activist leaked the anti-India toolkit on social media, Disha has reportedly said, “Can we just not say anything at all for a while. I am going to talk to lawyers.”

Disha Ravi has reportedly confessed before Delhi Police that she has been in touch with several questionable entities. She had tried to conceal details about her acquaintance with accused Nikita Jacob who has been evading the law enforcement agencies.

According to Delhi Police, Disha Ravi had panicked after Greta Thunberg shared the toolkit on farmers' protest on Twitter, which triggered a political storm in the country.

Disha Ravi had asked the Swedish environmental activist to delete her post fearing action under the stringent law UAPA as her name was mentioned in the document. Police claimed that Thunberg allegedly deleted the tweet following Disha's request and later, shared an edited version of the document. They also claimed that the edits were made by 22-year-old Disha.

Police sources said Disha wrote to Thunberg on WhatsApp, saying, "Okay can you not tweet the toolkit at all. Can we just not say anything at all for a while. I am gonna talk to lawyers. I am sorry but our names are on it and we can literally get UAPA against us."

Disha allegedly made the request fearing registration of the case under the stringent the Unlawful Activities (Prevention) Act (UAPA), police claimed. Thunberg, a teen climate activist, had shared the "toolkit" to lend her support to the farmers' agitation against the three farm laws.

In the document, various urgent actions, including creating a "Twitter storm" and protesting outside Indian embassies, were listed which needed to be taken to support the farmers' protest. A senior police officer said that while examining the WhatsApp chats between Thunberg and Disha Ravi, it came to notice that Disha had requested Greta Thunberg to delete the tweet as the "toolkit" had her name in the document.

While responding to queries relating to the toolkit document during a press conference at the Delhi Police headquarters, Deputy Commissioner of Police (Cyber Cell) Anyesh Roy said that it is not a static document.

"It's a dynamic document which has a large number of hyperlinks, which are links to various Google drives, Google docs and websites. One of the important website present here is askindiawhy.Com. This website has a lot of Pro-Khalistani content. So this document in itself has an action plan," Roy said.

The DCP said that in the first instance, the document was not to be shared in the public and was private, but it was accidentally shared. "So this was a document to be shared to a limited number of people, who would then influence public opinion. Having global icons to follow this, this toolkit was made to propagate pro-Khalistan propaganda" he also said.

Earlier in the day, Delhi Police said that Disha Ravi along with Mumbai lawyer Nikita Jacob and Pune engineer Shantanu created the "toolkit" related to the farmers' agitation and shared it with others to tarnish India's image.

The police claimed that Disha, who was arrested on Saturday from Bengaluru, sent the "toolkit" to teen climate activist Thunberg through the Telegram app, and also "coaxed her to act on it". The data was also deleted, police said, adding that Disha's Telegram account shows many links related to the "toolkit" were removed.