A total of 12 crore 79 lakh voters will cast their votes to decide the fate of 943 candidates at over 1 lakh 40 thousand polling booths across nine states in fourth phase.

NEW DELHI: Voting for 71 parliamentary constituencies spread across 8 states is scheduled to take place in the fourth phase of Lok Sabha election on Monday. Polling will be held in 17 seats in Maharashtra, 13 in Rajasthan and Uttar Pradesh each, 8 in West Bengal, 6 in Madhya Pradesh and Odisha each, 5 seats in Bihar and 3 in Jharkhand. A total of 12 crore 79 lakh voters will cast their votes to decide the fate of 943 candidates at over 1 lakh 40 thousand polling booths across nine states in fourth phase.

Apart from these 71 seats, polling will also be held in Anantnag constituency in Jammu and Kashmir on Monday. It is to be noted that voting in Anantnag is being held in three phases due to security reasons. The first phase of poll in Anantnag was held on April 23.

Also read: Know the parties which currently hold the 71 seats

Election in Rajasthan and Madhya Pradesh, where the BJP had won 52 out of 54 seats at stake in 2014 Lok Sabha poll, will begin in the fourth phase. The Congress is expected to make a comeback this time as the grand old party had formed the government after defeating BJP in both these states after last year's Assembly polls.

In 2014, the BJP had won 12 of these 13 seats and only Kannauj was won by Samajwadi Party's Dimple Yadav, wife of SP chief Akhilesh Yadav. This time the main contest is between BJP and SP-BSP-RLD alliance but Congress also is an important player in at least three constituencies - Unnao (Annu Tandon), Farrukhabad (Salman Khurshid) and Kanpur (Sriprakash Jaiswal).

Altogether, 2,38,88,367 people are eligible to cast their vote at 27,513 booths in the 13 constituencies. A total of 152 candidates are in the fray with a maximum of 15 in Shahjahanpur and minimum of five in Jalaun.

In Rajasthan polling in fourth phase is scheduled to take place in Tonk-Sawaimadhopur, Ajmer, Pali, Jodhpur, Barmer, Jalore, Udaipur, Banswara, Chittorgarh, Rajsamand, Bhilwara, Kota and Jhalawar-Baran. The fate of 172 candidates will be sealed on Monday from these 13 seats.

Rajasthan Chief Minister Ashok Gehlot's son is contesting from Jodhpur and he is up against Union minister Gajendra Singh Shekhawat. Former Union Minister Jaswant Singh's son Manvendra Singh is in the fray from Barmer. A total of 2.57 crore people are eligible to vote at 28, 182 polling stations in the 13 constituencies. The voters will decide the fate of 153 candidates from the above mentioned 13 parliamentary constituencies of Rajasthan on Monday.

Voting is scheduled to take place at eight parliamentary constituencies of West Bengal on Monday. The constituencies where polling will take place on Monday are Baharampur, Krishnagar, Ranaghat(SC), Burdwan East(SC), Burdwan-Durgapur, Asansol, Bolpur(SC) and Birbhum. The fate of 68 candidates will be decided by 1,34,56,491 voters in these eight seats.

In Baharampur, TMC's Apurba Sarkar (David) is pitted against sitting Congress MP, Adhir Ranjan Chowdhury. In Krishnagar, the key fight is between Mahua Moitra of TMC and BJP’s Kalyan Chaubey, a footballer. In Asansol, Union Minister and BJP leader Babul Supriyo is fighting against Moon Moon Sen of TMC. 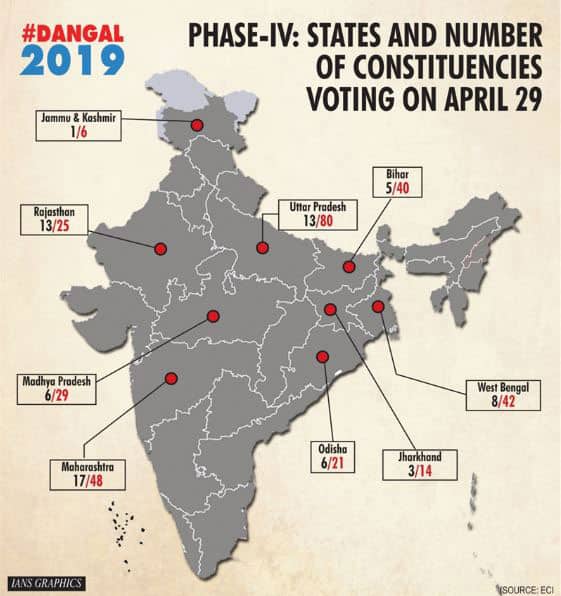 In Bihar, Lok Sabha seats of Begusarai, Munger, Ujiyarpur, Samastipur and Darbhanga are scheduled to go to polls in the fourth phase on Monday.All eyes will be on Begusarai seat from where CPI debutant Kanhaiya Kumar is pitted against firebrand BJP leader and Union Minister Giriraj Singh. The other key player in the fray from this seat is RJD's Tanveer Hassan, who had finished at second place in 2014 Lok Sabha poll, winning over 3 lakh votes.

Voting for Lohardaga (ST), Chatra and Palamu (SC) parliamentary constituencies in Jharkhand are scheduled to take place in the fourth phase on Monday. Altogether 45,26,693 voters will decide the electoral fate of 59 candidates including Union Minister of State for Tribal Affairs Sudarshan Bhagat from these three seats.

In Odisha, a total of six out of total 21 parliamentary constituencies will go to poll on Monday. The six constituencies are Mayurbhanj, Balasore, Bhadrak, Jajpur, Kendrapara and Jagatsinghpur.

Key candidates in the fourth phase are BJP national vice-president Baijayant Panda, who is in the fray from Kendrapara and BJP's Pratap Sarangi from Balasore Lok Sabha constituency. In Kendrapara, Panda is pitted against actor-turned-politician Anubhav Mohanty of BJD. In Balasore, Pratap Sarangi is fielded against BJD MP Rabindra Jena and OPCC president Niranjan Patnaik's son Nabajyoti Patnaik.

In Maharashtra, the political fate of Union minister Subhash Bhamre, and Congress leaders Milind Deora and Urmila Matondkar and 32o other candidates would be decided in the fourth and final phase of polling across 17 Lok Sabha seats of the state on Monday.

A lot will be at stake for both the BJP and the Congress in Madhya Pradesh as polling for six Lok Sabha seats will take place on Monday. The six constituencies where voting is scheduled to take place are Chhindwara, Shahdol, Sidhi, Jabalpur, Mandla and Balaghat.

Election to 542 Lok Sabha seats is being conducted in seven phases between April 11 and May 19. Polling in Tamil Nadu's Vellore has been cancelled following excess use of money power. The counting of votes is scheduled to take place on May 23.