Highights from the ground for the first phase of Lok Sabha Election 2019: 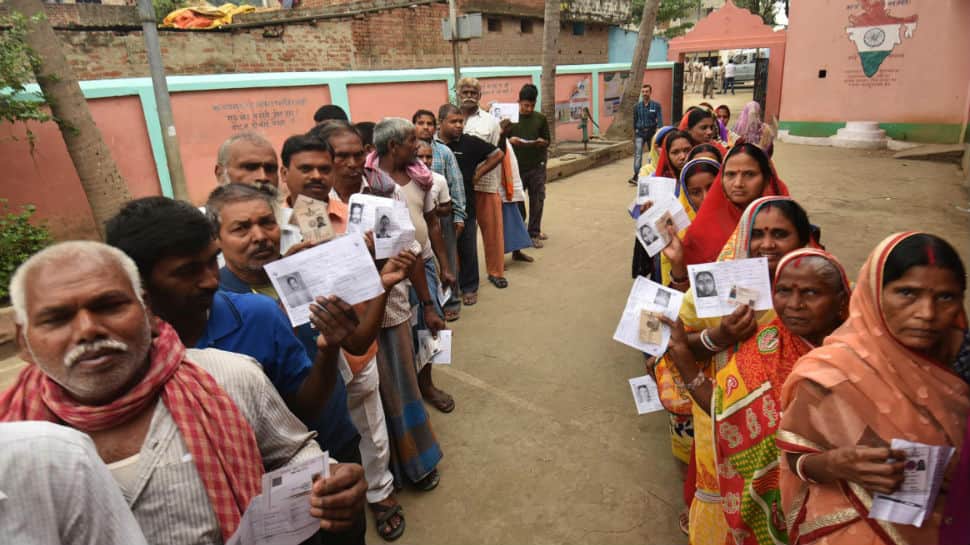 As many as 20 states and union territories participated in the first phase of Lok Sabha 2019 election on Thursday. While the day saw sporadic incidents of violence and some allegations of EVMs malfunctioning, polling was mostly peaceful and organised.

Here are the highlights from the ground for the first phase of Lok Sabha Election 2019: 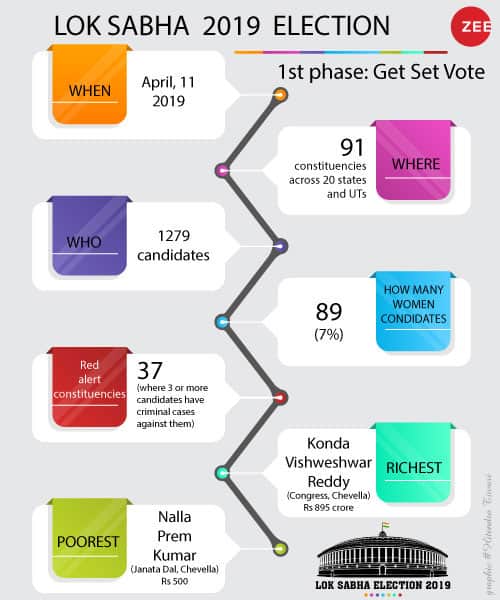 The highest voting was seen in Tripura (81.8 per cent) followed by West Bengal (81 per cent).

Sinha informs voting on Thursday took place across 1.7 lakh polling stations in the country, adds that polling has now concluded completely in 10 states.

"We would like to thank millions of voters who came to vote despite difficulties, especially differently-abled and senior citizens," Deputy Election Commissioner Umesh Sinha.

Andaman and Nicobar Islands - 70.67 per cent

Surendra Kumar, Chief Electoral Officer, Odisha: We have been successful in conducting the first phase of polls in a free, fair & peaceful manner. There has been no untoward incident whatsoever reported in the polls. The failure rate of EVMs has been under 1%. #IndiaElections2019 pic.twitter.com/xVcjNXaIyr

Breakdown of voter turnout in Maharashtra till 5PM: 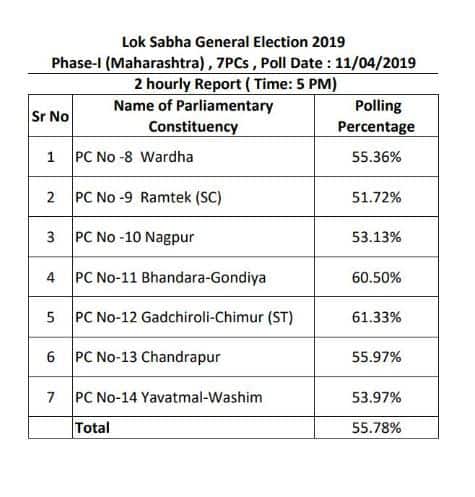 Telangana sees voter turnout of 60.57 per cent till 5PM.

Voting in the first phase concludes for all except those currently in queues.

Protecting the country, one vote at a time!

Gender no bar when it comes to voting!

Here's how women have come out in more and more numbers to vote in Lok Sabha elections: 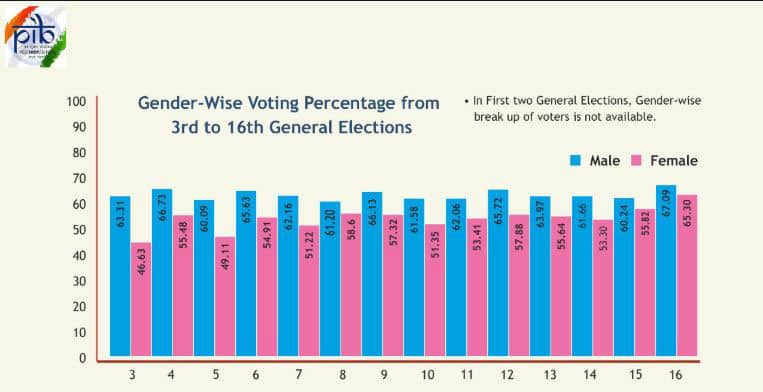 Voting as Indian citizens for the first time:

West Bengal: Visuals from a polling booth in Coochbehar as people queue up to vote. #IndiaElections2019 pic.twitter.com/xDRSnmLAhe

Voter turnout in Maharashtra till 3PM today is 46.13 per cent.

Prime Minister Narendra Modi slams Congress for indulging in corruption, says a new scam 'Tughlaq Road Chunav Ghotala' by it has come to the fore.

Here is the full list of voter turnout across Telangana's parliamentary constituencies today (till 3PM): 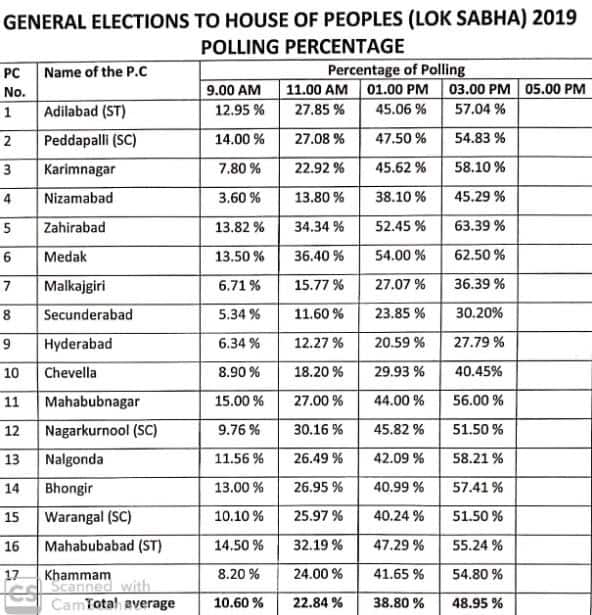 Devendra Fadnavis and wife Amruta cast their votes in Nagpur:

Voter turnout till 3PM in Uttar Pradesh is 50.86 per cent.

Voter turnout till 3pm in:

EC voter turnout figures from all 20 states and UTs voting today (till 2PM): 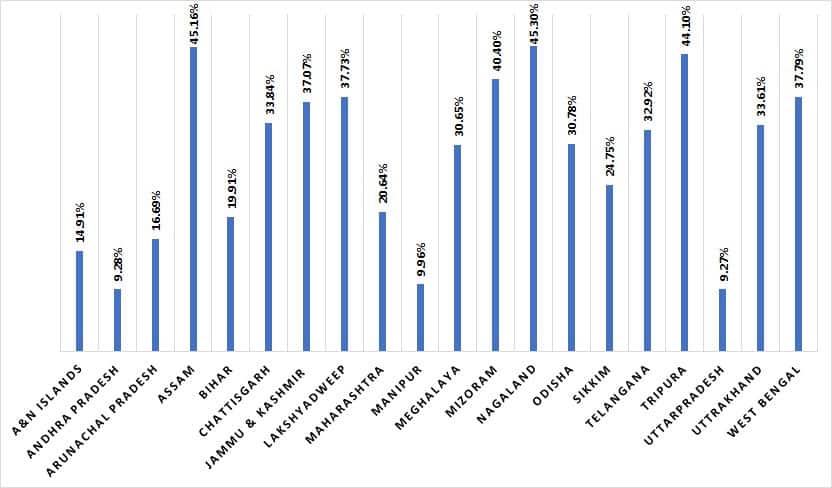 Voting percentage till 1pm in: 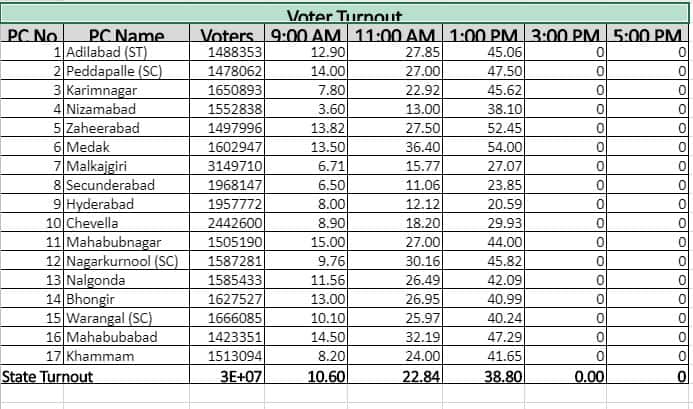 Andra Pradesh: TDP worker S Bhaskar Reddy has died in poll clashes in Tadipatri town of Anantapur on Thursday during the first phase of Lok Sabha Election 2019. The party alleged that YSR Congress Party workers are behind the incident.

TDP leader S Bhaskar Reddy killed in clashes in Tadipatri town of Anantapur. TDP has alleged that YSRCP workers are behind the incident: ANI 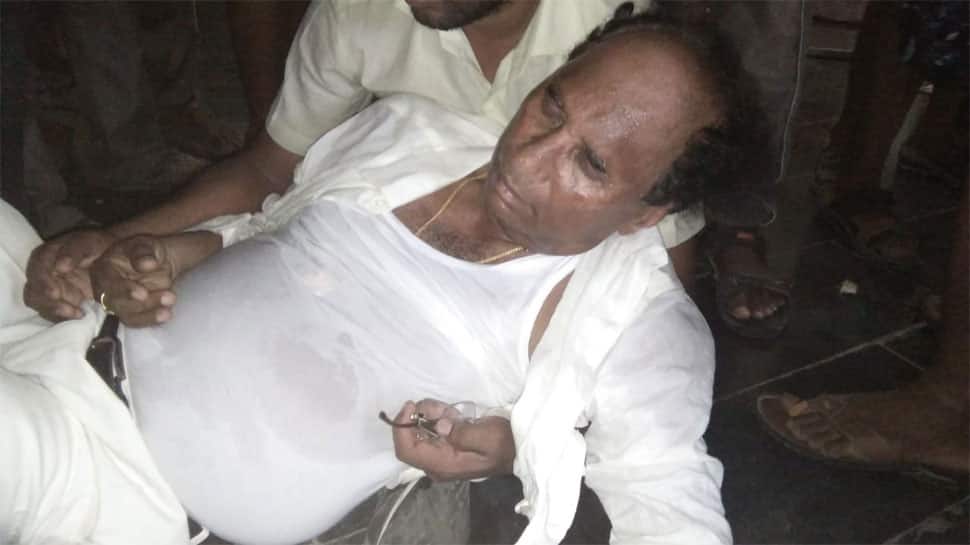 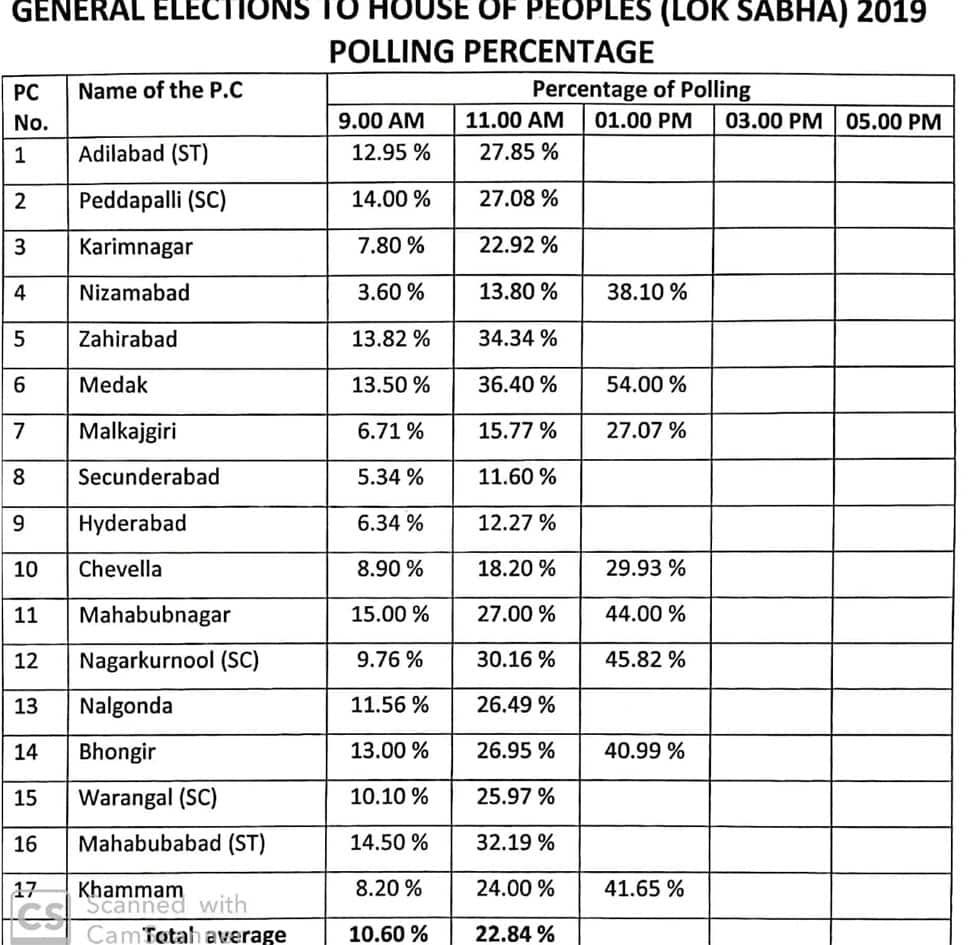 States with a maximum number of women candidates elected in 2014; Uttar Pradesh tops the list with 13 followed by West Bengal with 12.

States with a maximum number of women candidates elected in 2014; Uttar Pradesh tops the list with 13 followed by West Bengal with 12.#IndiaElections2019 #VoteForIndia pic.twitter.com/xJoxlWrZ12

BR Tiwari, Additional Chief Election Officer on reports of Namo food packets being distributed in Noida: "We came to know about this from media reports. There is a very old shop, more than 10-year-old, which has this brand name. It has been highlighted in a different manner in media."

"The right to vote is a precious gift that we’ve received from our freedom fighters & martyrs. The only way to express our sincere gratitude towards their sacrifices is to exercise that right," tweeted Rajya Sabha MP Subhash Chandra.

The right to vote is a precious gift that we’ve received from our freedom fighters & martyrs. The only way to express our sincere gratitude towards their sacrifices is to exercise that right.
देश के लिए, देशवासियों के लिए, अपने लिए, अपने परिवार के लिए मतदान अवश्य करें।

Responding to Omar Abdullah's allegations, Poonch (J&K) District Election Officer said, "There was an issue with Congress button in Shahpur, our staff replaced the machine. At another polling station BJP button wasn't working, we changed that also."

Former Chief Minister of Jammu and Kashmir and National Conference leader Omar Abdullah alleged that the Congress button is not working in Poonch polling stations: 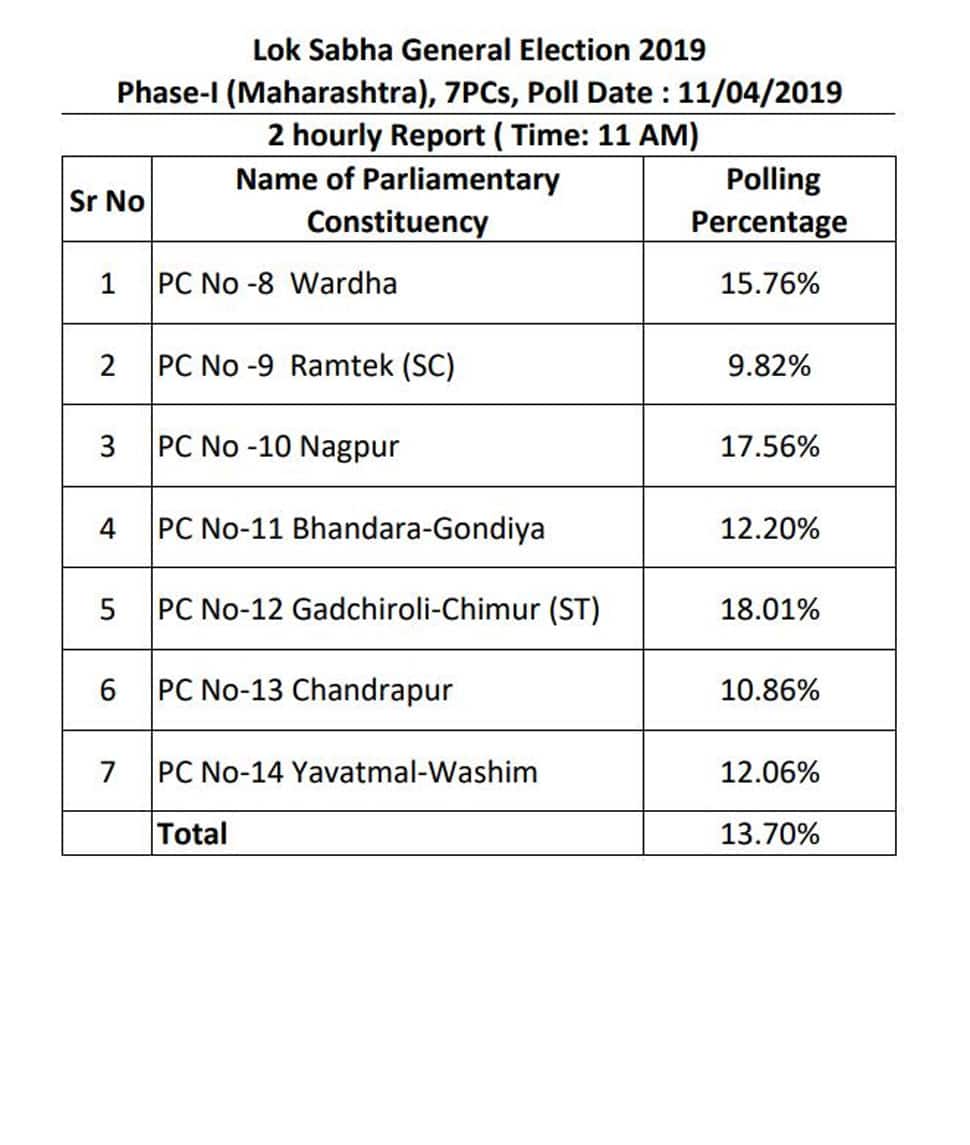 Top stars from the Telugu film industry including renowned actors Allu Arjun, Chiranjeevi, Ram Charan Tej, Nandamuri Taraka Rama Rao Jr also known as Junior NTR and SS Rajamouli came out and cast their vote in the ongoing Lok Sabha elections. Allu Arjun arrived at the BSNL office, Jubilee Hills, Hyderabad to cast his vote. The actor also urged his fans to exercise their franchise by sharing a post on his Instagram account.

Today is that 1 day which will decide how the next 1825 days should be. Pls cast your vote.

Telangana: Khammam Congress candidate Renuka Choudhary casts her vote. Says 'I am hopeful that we will be able to win this race, I am very optimistic' #LokSabhaElections2019 pic.twitter.com/nVjAxbpr78

Maharashtra: IED blast by Naxals near a polling booth in Etapalli in Gadchiroli district. No injuries have been reported. 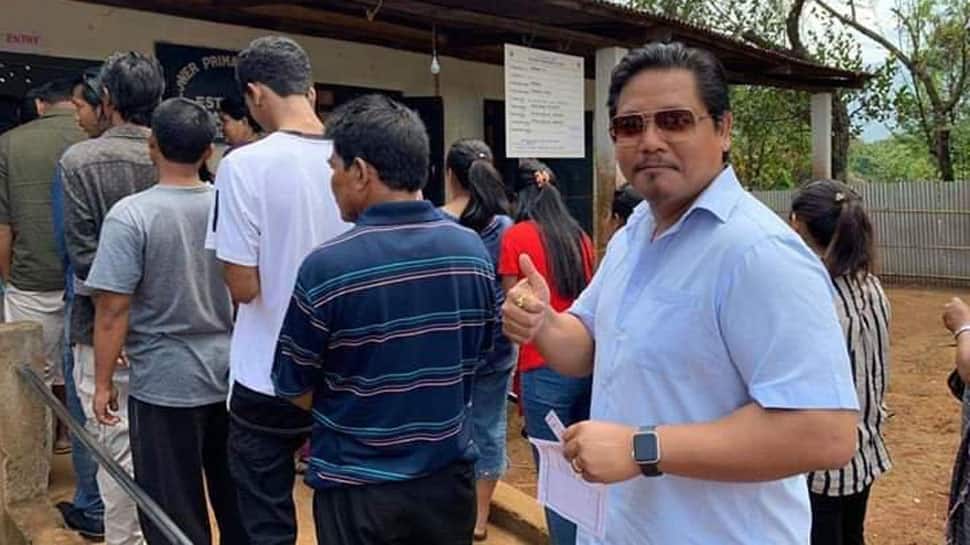 Sikkim: Nearly 15 per cent votes were cast in the first three hours of polling in Sikkim on Thursday in simultaneous elections for a new 32-member state Legislative Assembly and to pick its only Lok Sabha member. "Around 15 per cent polling has been reported overall," sources in the state Chief Electoral Officer`s office said.

Voting began at 7 a.m. and will end at 5 p.m. A total of 423,325 voters are eligible to exercise their franchise in 567 polling stations to choose their representatives from among 150 candidates for the state Assembly and 11 for the lone Lok Sabha seat.