After weeks of high drama, the Board of Control for Cricket in India (BCCI) finally appointed former Indian cricketer Ravi Shastri as the head coach of the Indian team on Tuesday. 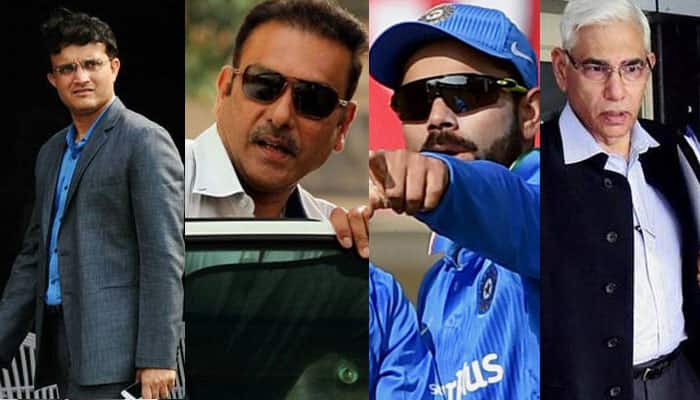 After weeks of drama, veteran Mumbai cricketer Ravi Shastri was named as Indian cricket coach by BCCI.
Share:
Written By:

New Delhi: After weeks of high drama, the Board of Control for Cricket in India (BCCI) finally appointed former Indian cricketer Ravi Shastri as the head coach of the Indian team on Tuesday.

After the ICC Champions Trophy, a rift was reported between Anil Kumble and Virat Kohli with the latter not being happy with the legendary leggie's style of coaching. The Indian players were also said to be unhappy with Kumble's 'hard taskmaster' approach.

Before the BCCI announced their final decision on Tuesday, here's a timeline of how the drama unfolded:

May 25, 2017: While many believed Kumble will get an extension after his contract came to an end after ICC Champions Trophy, BCCI bowled a googly by inviting fresh applications for the top job. Virender Sehwag, Tom Moody, Lalchand Rajput, Richard Pybus and Dodda Ganesh were the first set of candidates who had applied. The last date for submission of applications was extended to July 9. (Read full story HERE)

Jun 3, 2017: At a press conference, Kohli denied reports of rift with Kumble. The flamboyant right-hander added that it is impossible for humans to agree on everything but people should not speculate and spread rumours about something if they don’t know about it. (Read full story HERE)

June 20, 2017: While Indian team boarded a flight to Barbados for a limited-overs series against West Indies, Kumble stayed back as he had to attend an ICC meet. However, much to the surprise of all, Kumble soon stepped down as coach citing citing reservations Kohli had with his style of coaching as the reason behind his move. (Read full story HERE)

July 3, 2017: With Kumble out of the race, Shastri formally applied for the post of Indian coach. It was also reported that batting Sachin Tendulkar had a word with him, asking him to apply for the post. (Read full story HERE)

July 10, 2017: On the judgement day, three-member CAC panel interviewed five candidates and after the process went for hours, Ganguly said at a conference that the committee had decided to hold on to the name of the new coach as they wanted to discuss with Indian skipper Kohli. (Read full story HERE)

July 11, 2017: According to a report in The Hindu, Rai, who is the chairman of the Supreme Court-appointed CoA, has spoken to BCCI officials asking them to announce the name by today evening. (Read full story HERE)

July 11, 2017: While the announcement of new India coach was expected by Tuesday evening, Shastri was named as Kumble's successor with most of the media houses confirming the news.

July 11, 2017: Soon after news of Shastri being appointed as India coach flooded social media, BCCI acting secretary Amitabh Chaudhary made a stunning revelation where he said that BCCI had received no official word on the new Indian coach from the three-member CAC panel and they will still deliberating over the final name. (Read full story HERE)

July 11, 2017: By the end of the day, the drama came to an end as Shastri was eventually named Indian coach. But in an interesting move, veteran Indian pacer Zaheer Khan was named as the bowling coach while former Indian skipper Rahul Dravid was picked as batting consultant for Team India's overseas tours. (Read full story HERE)