Lok Sabha election 2019 has been a lengthy and intense battle for political supremacy in India. As counting progressed on Thursday, BJP secured a massive mandate to return to power. 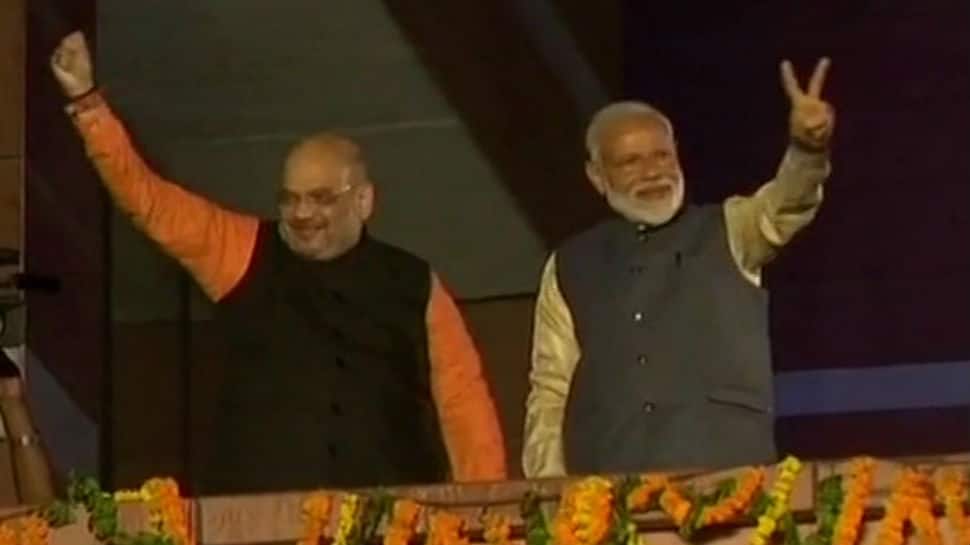 After months of campaigning and weeks of voting under a scorching summer sun in Lok Sabha election 2019 - the world's largest democratic exercise, the BJP-led NDA received an overwhelming majority to ensure another term for Prime Minister Narendra Modi.

Modi will now be the only non-Congress PM to get two successive terms in office. Congress, on the other hand, has been decimated in almost every state - barring Kerala, Punjab and Tamil Nadu where it was in alliance with DMK.

Lok Sabha election results 2019: Here are the winning figures of the parties as per the EC at 12 am

Lok Sabha election results 2019: Congress has won eight parliamentary seats in Punjab out of the total 13 seats in the state. The Akali Dal-BJP alliance won on four seats and the AAP was leading on one. SAD chief Sukhbir Singh Badal, Bollywood actor Sunny Deol, Union minister Harsimrat Kaur Badal, former Union ministers Manish Tewari and Preneet Kaur, and Ravneet Singh Bittu were among the prominent leaders who won in Punjab.

Lok Sabha election 2019: The YSR Congress Party decimated the Chandrababu Naidu-led TDP and appeared on course for a landslide win in Andhra Pradesh with its candidates winning in 74 seats and leading in 76 others.

Lok Sabha election 2019: The Union Cabinet will meet on Friday evening to recommend the dissolution of the 16th Lok Sabha. After the Cabinet's recommendation is passed in the form of a resolution, President Ram Nath Kovind will dissolve the present Lok Sabha, the term of which is ending on June 3. The 17th Lok Sabha has to be constituted before June 3 and the process to form a new House will be initiated when the three Election Commissioners meet the President in the next few days to hand over the list of newly-elected members.

Lok Sabha election results 2019: BJP's state chief Dilip Ghosh said the West Bengal Chief Minister Mamata Banerjee should no longer dream of becoming prime minister, rather she should be concerned about saving her chief minister's chair. "The people of Bengal has given a verdict against TMC and its misrule in Bengal. The TMC has lost the moral right to continue in office. The people want to get rid of this government," Ghosh said. He himself is headed for a victory from the Midnapore seat.

Lok Sabha election 2019 results: "I once again say that I will never to anything for myself personally," says PM Modi. "I will continue to dedicate myself to India."

Lok Sabha election 2019 results: "Not many knew me in 2014 and yet people put their faith in me. In 2019, people got to know me better and have put even more faith in me. I understand the emotions behind it. I want to tell my fellow citizens that even in the days to come, I will never do any work with the wrong intentions," says PM Modi

Lok Sabha election 2019 results: PM Modi says all that was said (against him) during the election has been forgotten by him and that for the sake of India's progress, he would want to take everyone together in the path towards development.

Lok Sabha election 2019 results: "This is a huge mandate, a mandate that has stunned the world," says PM Modi. "The population of India was a lot less in pre-independence times but still, our brave freedom fighters ended the rule of foreign powers. Time has now come for 130 crore Indians to come together once again and become determined to rid India of all its problems."

Lok Sabha election 2019 results: PM Modi also attacks Opposition. "For the first time, opposition parties in the country were unable to level even a single charge of corruption against the government. For the first time ever, the issue of price rise was never raised by opposition parties," he says. "Governments will come and governments will go but people of the country have put a new narrative for the unity of and harmony in India. There will be only two castes in the country. In 21st century India, there's one caste of people who want to come out of poverty and the second is of people who want to help remove poverty. Both these need to be empowered, this should be our dream."

Lok Sabha election 2019 results: PM Modi also thanks BJP workers. "Your selfless work and dedication has helped us get such a huge mandate."

Lok Sabha election 2019 results: "If there is a winner today, it is India, it is democracy, it is the people of this country," says PM Modi. "We dedicate this win to the people of India."

Lok Sabha election 2019 results: PM Modi thanks Election Commission for conducting Lok Sabha election in a free and fair manner. He also says the result shows people of India have voted for India's progress. "When Lord Krishna was asked whose side he was on during Mahabharata, he said he was for Hastinapur. I believe that 130 crore Indians took the avataar of Lord Krishna and stood for India."

Lok Sabha election 2019 results: Chants of 'Modi, Modi' boom as the PM makes his way to the podium to address the gathering and the country. "We went to people and asked for support for a 'New India'. Today, we see that scores of people in the country put their faith in me. I bow my head and pay respect to all the citizens of the country. The world has to recognise the democratic powers of India."

Lok Sabha election 2019 results: "This is a historic victory. After 50 years someone has won an absolute majority for the second time in a row," says Amit Shah.

Lok Sabha election 2019 results: Amit Shah flays Opposition. "India continues to reject dynastic politics and politics of negativity. People in the country have shown that their faith is only in those who can ensure the development and welfare of all. Even in West Bengal where every tactic was used to stop BJP, we are winning in 18 seats."

Lok Sabha election 2019 results: Amit Shah thanks BJP workers and voters for a massive mandate. "This is the biggest electoral win since independence. This is a win for Modi ji's extreme patience and of your hard work."

Lok Sabha election results 2019: Prime Minister Narendra Modi reaches BJP HQ, is showered by flower petals. He - along with Amit Shah - flashes the 'Victory' symbol as thousands of well-wishers cheer for him.

Lok Sabha election 2019 results: BJP has confirmed wins in 42 seats so far and leading in 260 more seats so far. Congress has so far won in 11 seats and is leading in 40.

Lok Sabha election results 2019: The Polit Bureau of the Communist Party of India (Marxist) issues a statement: The CPI(M) has suffered a severe setback in these elections. We shall introspect the reasons for this and draw proper lessons for the future.  The CPI(M) thanks all those people who have voted for its candidates. The PB salutes all those who worked in carrying forward the CPI(M)’s message in these elections to the people.

Lok Sabha election 2019 results: PM Narendra Modi announces he will now remove 'Chowkidar' from his Twitter handle but adds the spirit of 'Chowkidar' will be an integral part of his life.

Lok Sabha election 2019 results: Sources say Rahul Gandhi has offered to resign as Congress president. He is learnt to have offered his resignation to Sonia Gandhi.

Lok Sabha election results 2019: Priyanka Gandhi wishes BJP for its win. "It is the will of the people and we respect it. I congratulate the BJP workers, party leaders and Narendra Modi."

Lok Sabha election 2019 results: Winner! Smriti Irani wins Amethi after Congress president Rahul Gandhi concedes defeat at his press conference. "I congratulate her on her win. I would like to tell her to take care of the people there."

Lok Sabha election results 2019: Rahul Gandhi, at a press conference, congratulates Narendra Modi and BJP for winning the election. "Our thought process and ideologies are completely different but we have to respect what people of the country want. I congratulate Narendra Modi ji and the BJP for their win," he says. "I don't want to comment right now on what went wrong for us. I only want to congratulate the PM for now. We fought well and Congress workers worked extremely hard."

Lok Sabha election 2019 results: Pakistan PM Imran Khan sends his wishes to Narendra Modi. ""I congratulate Prime Minister Modi on the electoral victory of BJP and allies. Look forward to working with him for peace, progress and prosperity in South Asia."

I congratulate Prime Minister Modi on the electoral victory of BJP and allies. Look forward to working with him for peace, progress and prosperity in South Asia

Lok Sabha election results 2019: Gautam Gambhir thanks people of India for their fate in BJP. "Neither it’s a ‘Lovely’ cover drive and nor it is an ‘Atishi ballebaazi'. It’s just the BJP’s ‘Gambhir’ ideology which people have supported."

Neither it’s a ‘Lovely’ cover drive and nor it is an ‘?????’ ??????????? It’s just the BJP’s ‘?????’ ideology which people have supported. Thanks a lot to all the @BJP4India and @BJP4Delhi team-mates for getting this mandate. We won’t fail people’s choice. #EkBaarPhirModiSarkar

Lok Sabha election 2019 results: Captain Amarinder Singh takes a jab at Navjot Singh Sidhu. "Indians, especially servicemen, will not tolerate hugging the Pakistani Army Chief," he says at a press conference. Asked about Rahul Gandhi, he said that the Congress President cannot be faulted. "The results are not what we wanted (but) asking him for his resignation is not correct. He is a good leader." 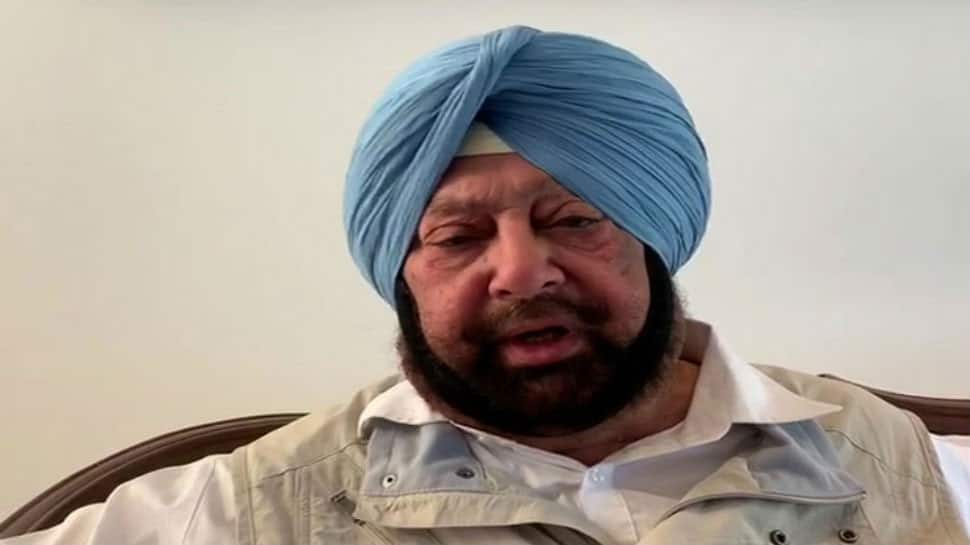 Lok Sabha election 2019 results. "A solid slap on my face," tweets Prakash Raj. He contested from Bengaluru Central seat as an Independent and is currently trailing BJP, Congress.

a SOLID SLAP on my face ..as More ABUSE..TROLL..and HUMILIATION come my way..I WILL STAND MY GROUND ..My RESOLVE to FIGHT for SECULAR INDIA will continue..A TOUGH JOURNEY AHEAD HAS JUST BEGUN ..THANK YOU EVERYONE WHO WERE WITH ME IN THIS JOURNEY. .... JAI HIND

Lok Sabha election results 2019: LK Advani wishes BJP. "Heartiest congratulations to Shri Narendrabhai Modi for steering the BJP towards this unprecedented victory in the elections. Shri Amitbhai Shah as the BJP President and all the dedicated workers of the party have put in enormous effort in making sure that the message of BJP reaches every voter of the country. It is such a wonderful feeling that in a country as large and diverse as India, the electoral process has been so successfully completed and for that, my compliments to the electorate and all the agencies involved.