Lok Sabha Election Results 2019 in West Bengal is witnessing a contest between Mamata Banerjee-led Trinamool Congress, the BJP, the Left Front and the Congress. The state sends the third highest number of MPs in the Lok Sabha. A total of 466 candidates contested the Lok Sabha election 2019, the results of which will be declared today. 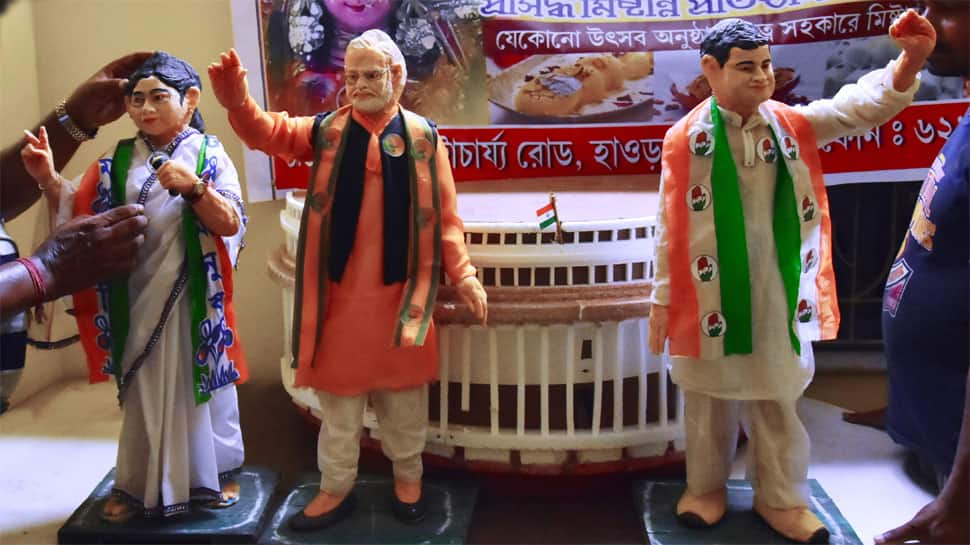 A sweet maker gives finishing touch at sweet-made statues of Narendra Modi, Mamata Banerjee, Rahul Gandhi at a sweet shop on the Eve of counting of votes in Howrah near Kolkata on Wednesday (ANI Photo)
Share:
Written By:

KOLKATA: The tough four-cornered Lok Sabha election in West Bengal will throw up the winners and losers today when votes in all the 42 constituencies are counted. The Lok Sabha election results 2019 are also likely to have a major impact on the next government - both in the state and the Centre.

West Bengal with 42 Lok Sabha constituencies has the third highest number of lawmakers in the lower house of Parliament. A total of 466 candidates contested the Lok Sabha election 2019, the results of which will be declared on May 23 (Thursday).

Although West Bengal has been a Trinamool Congress bastion for the last several years, the state seems to have undergone a massive change in its political leanings during Lok Sabha election 2019. While it always been a direct contest between Mamata Banerjee-led Trinamool Congress and the Left Front with Congress also strong in a few pockets, the Bharatiya Janata Party (BJP) has gone out all guns blazing to become a major player in the state.

PM Narendra Modi and BJP chief Amit Shah have led the BJP charge, addressing several rallies in the state which was countered on every junction by the supremely combative Mamata Banerjee.

The state went to polls in all the seven phases of Lok Sabha election - April 11, April 18, April 23, April 29, May 6, May 12 and May 19. West Bengal’s 10 seats out of 42 are reserved for Scheduled Caste while two are for Scheduled Tribe candidates.

Trinamool Congress has swept aside the opposition in the 2014 Lok Sabha election by winning 34 seats. The Congress managed just four seats while the Left Front which ruled West Bengal for almost three-and-a-half decades till its rout at the hands of Trinamool Congress in the 2011 Assembly election, could win in only two seats. The BJP was also victorious in two Lok Sabha constituencies.

Arjun Singh, a former Trinamool MLA from Bhatpara, is contesting on a BJP ticket from Barrackpore against former Union minister and TMC candidate Dinesh Trivedi. Trinamool’s sitting MP Arpita Ghosh is seeking re-election from Balurghat where she is facing Ranen Barman of RSP, Sukanta Mazumdar of BJP, Abdus Sadek Sarkar of Congress and Nalin Chandra Murmu of BSP.

TMC has nominated Kanhaiyalal Agarwal in Raiganj seat against Md Salim of CPI(M), Deepa Dasmunshi of Congress and Debasree Chowdhury of BJP.